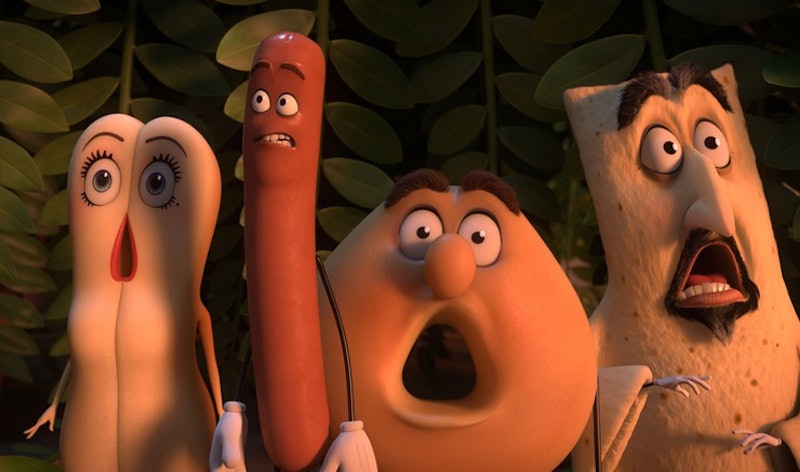 In a rather head-scratching piece of movie news, Sausage Party is getting an Oscars campaign. I know, I know: This is surprisng, right? Despite this very odd match between a film and the Academy, it could be one of the most interesting in the history of the award show. What makes Sausage Party such an interesting (and noteworthy) film to take up the Oscars campaign route is that it's one of the few R-rated animated comedies that has an actual meatiness to its plot. There is a subversiveness to it, and the kind of danger that could intrigue Academy voters enough to get on board with the film's campaign. It's taboo, it's risky, and it's relevant. If Seth Rogen and the team behind Sausage Party were hoping to shake up a staid Academy, they're certainly going to be successful.

Ostensibly, Sausage Party will be campaigning primarily for the Best Animated Feature Film award. The category itself is usually comprised of rather safe fare, making Sausage Party's push even more noticeable. The last handful of winners of this award include Inside Out, Big Hero 6, Frozen, Brave, and Rango. With the exception of Rango, the category has been dominated with wins for Disney and Pixar, respectively. In comparison, Sausage Party stands out from the comparable wholesomeness of these previous winners. This factoid alone could help tip the film's campaign into even more favorable territory for those voters who want to shake up the category.

The Sausage Party Oscars campaign, I'm sure, will be chock-full of food puns doubling as dirty innuendo. Vanity Fair reported that this campaign will consist of mailed-out screeners, copies of Alan Menken's original song "The Great Beyond," and multiple viewing events as part of the large push from Sony Studios to get nothing but sausages on the voter's minds. And you know what? I genuinely think that Sausage Party could go all the way to the Academy Awards. Doesn't everybody want to see a real shake-up once in a while?

Perhaps my favorite quote to come out of this story comes from the movie's star and co-writer. Ever the charming rogue, Rogen told the Hollywood Reporter, "We [the Sausage Party team] just want to meet Leonardo Dicaprio." Me too, Rogen. Me too.