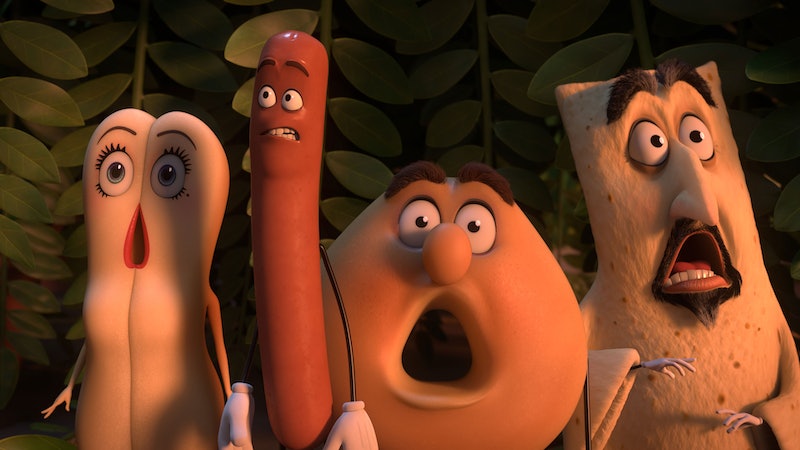 By now, audiences know not to go into a Seth Rogen movie expecting innocent plotlines or G-rated humor. Whether he's battling frat boys in Neighbors, getting a one-night stand pregnant in Knocked Up, or smoking weed in The Night Before (and, you know, pretty much every other movie), Rogen has made an impressive career out of doing everything your parents ever told you not to do. Yet nothing that he has done before — I repeat, nothing — comes close to what he and his co-writers have come up with in Sausage Party . The animated movie, about items of food who learn, to their horror, what really happens when humans take them home from the store, is the dirtiest, raunchiest, most messed-up thing you'll see in theaters this year, and it's also exactly what we all need right now.

It's no exaggeration to say that 2016 has, so far, been a bit of a mess. With the presidential election getting scarier by the minute and things like Zika and terror attacks constantly in the news, the world, right now, is a pretty depressing place. Exciting events like the Olympics help distract us to an extent, but even that doesn't come without its own share of controversy. It's hard to go a day without seeing some new, horrifying headline, or to feel let down by the seemingly endless dark news cycle, and sometimes, it feels like we all could use a break from reality. We need something so diverting and different that it makes the awfulness of 2016 the last thing on our minds — and Sausage Party , in all its strange, R-rated glory, has turned out to be just the thing.

Look, this movie is not going to solve the world's problems (although a scene in which the Israeli-Palestinian conflict is settled partly over a shared love of hummus hints that it could), but for 88 minutes, it will distract you from them. This movie is so strange, so weird, and so unbelievably, graphically dirty, with talking condoms and lesbian tacos and a Micheal Cera-voiced sausage arguing about girth, that you will not be able to think of anything else for hours after you leave the theater, nor will you want to. The only things that'll be on your mind? How guilty you now feel about the popcorn you ate while you watched, and how you'll never, ever look at a piece of lavash the same way.

There are a lot of summer movies this year that could distract you from reality for a few hours: the superhero-packed Suicide Squad, the '40s-set Florence Foster Jenkins, the nostalgia-heavy Pete's Dragon, for starters. But those are all still "regular" movies — for all their special effects or cool costumes, they're still fairly standard Hollywood films, with fully-developed plots and story arcs that (at least somewhat) make sense. Yet Sausage Party is, for better and for worse, unlike any other movie out there, and, really, barely even an actual movie at all. It's more like a giant in-joke between Rogen and his co-writers, a "what if?" idea spun ridiculously out of control. There are sausages having sex with buns, used condoms coming to terrifyingly animated life, an actual vaginal douche swigging vodka and becoming the movie's biggest villain. There is a plot, somewhat (the food items learn that humans eat them and so they develop a plan to get revenge), but it's not developed in a way that actually makes it matter. The movie gets so ridiculously weird that you forget it ever had a point in the first place.

This isn't necessarily a good thing quality-wise, of course — Sausage Party's biggest flaw is its inability to even come close at sustaining the hilarity of its premise — but it does make the movie fairly unforgettable. It's the type of movie you tell all your friends to see not because you want to talk about it or even want to recommend it, but because you need someone to understand whatever it was you just experienced. That's not to say there is no scene or theme worth discussing from the film; food-having-sex aside, Sausage Party features a number of rape and race-related jokes that are self-aware enough to be funny, but frequent and graphic enough to be discomforting. But whatever your thoughts are on those scenes, they're covered in enough craziness (think: a vaginal douche literally jumping into the pants of an unsuspecting human) to color any serious opinion you might've had.

Based purely on quality, Sausage Party is not the funniest movie you'll see this year, or even the funniest movie starring Rogen you'll see this year (that'd be Neighbors 2: Sorority Rising). But considering the dire state of society right now, why not be distracted for a few hours by a raunchy animated movie where a love of hummus and a sex-obsessed sausage can save the world?