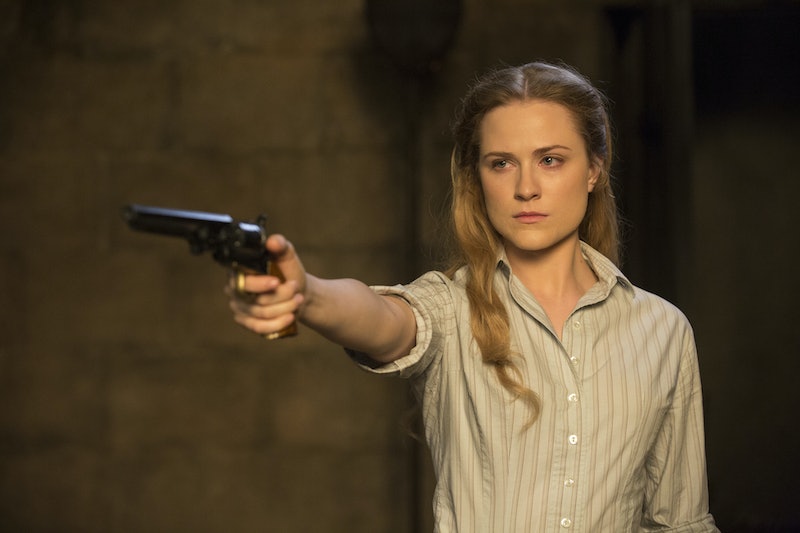 With a change of clothes can come a change of attitude and while new duds weren't the reason for the evolution of Dolores on Westworld during the Oct. 30 episode "Contrapasso," they indicated a major shift for her character. The original host lost her blue dress and geared up — cowboy hat and all — to hit the road with William and Logan on a mission. Dolores had said that she hadn't intended to use the gun she was given, but by the end of the episode, she killed to save William's life. Although this wasn't the first time that she had shot anyone, Dolores chose to stop being the damsel and literally flipped the script of the narrative that the park's staff had given her for her entire (robotic) life.

As Dolores continued to see visions in "Contrapasso," she started getting closer to identifying the path of self-discovery she should be following. Her movements didn't go unnoticed by park creator Dr. Robert Ford and through a sit-down with Dolores, he revealed that it may be Westworld's other creator — Arnold — who has been speaking to the original host. That means when she was about to be raped by Rebus in Episode 3, "The Stray," it could have been Arnold's voice telling her, "Kill him." Yet, after some Confederatos cornered William in Episode 5, Dolores didn't hear anyone prompting her to shoot them dead with efficiency — she chose to take that action all by herself. It was a far cry from the reluctancy and shaking hands she had displayed while holding a gun before and when William marveled at her feat, she explained, "You said people come here to change the story of their lives. I imagined a story where I didn't have to be the damsel."

The roles of women in the park make sense in the context of the 1800s experience that Westworld wants to give to its guests, but the parks' writers making their two main female characters a damsel and a madame was pretty uninspired. But finally, both Dolores and Maeve had awakenings of sorts in "Contrapasso" where they took matters into their own hands — because they are no longer content to just accept the lot they've been given in this fictional world.

Of course, Dolores' revelation that she can protect herself and others will impact the plot of the show and her character's journey, but it's also a general message of female empowerment. It's particularly poignant when you think of how many times that Dolores has been raped and killed for the enjoyment of the guests. She has been a host for over 30 years, so for her to go against her programming and stop being the victim is a major shift, as well as a metaphor for people in the real world that you don't need to accept your current reality and can become your own hero.

As William had pointed out and Dolores noted, the guests come to the park to be someone they aren't in the real world. For the original host, the park is the only reality that she has known (besides when she speaks with her creators) for her entire existence. Even though she's not actually a human, Dolores realized that her identity shouldn't be dictated by the guests or programmers anymore — it's up to her. And with the confident proclamation that she'll no longer be the damsel, Dolores doesn't need anyone to save her from the horrors that Westworld has in store — she can take care of herself.