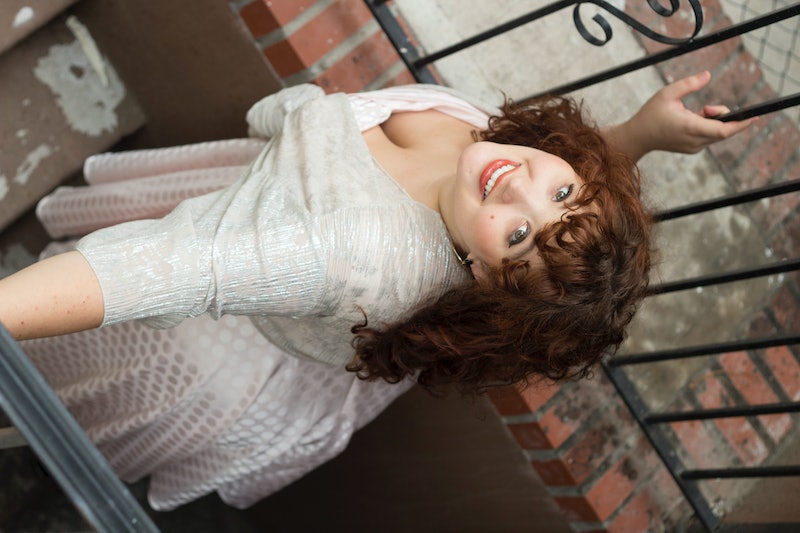 When I think of things that are brave , I think of my mom — who, despite growing up in a Colombian, Catholic family that believed divorce was a sin and that a woman's duty was to be there for her husband no matter what, was able to leave a couple of toxic marriages and raise two kids on her own while working multiple jobs and going to night school. I think of Lili Elbe, one of the first known recipients of gender confirmation surgery back in the '30s. I think of MLK, whose activism laid the groundwork for so many advancements in civil rights. But I also think of plus size women wearing the same clothes their straight size counterparts might.

In April 2015, SKORCH Magazine founder Jessica Kane shared a swimsuit photo of herself on Instagram. She was in a one-piece bathing suit, but her cellulite was in shot. You could still see that she was a plus size woman with a visible belly outline, and she wasn't hiding those facts or looking remotely sulky. But her caption read, "THIS WAS NOT BRAVE. I've been told how brave I am for not having a coverup, but going without a wrap would only take bravery if I cared what others thought of me, but I don't [...] Things that DO take bravery? A family battling tragic illness, a mother trying to beat addiction, a person trying to break free of domestic violence, reaching out for help when you have already planned your suicide and feel like you can't breath one more day." I totally understand where Kane was coming from, of course. Doing something as seemingly benign as wearing swimwear to the beach shouldn't have to be brave. And yet... I can't help but feel that it is. Particularly when your body has been marginalized in some way.

I wish that wearing a crop top or a fatkini or a mini skirt as a fat person didn't have to be radical. I wish it could just be the norm. I wish that passersby on the street who catch a glimpse of a woman with her back boobs on display didn't always do a double take. And that the sight of a size-24 ass in a bikini thong wasn't enough to make my 35-year-old brother pull out his camera just to capture the moment — a memento from vacation to show his friends and laugh about later. Much to my dismay, that's just not the world we live in right now.

While I genuinely think that all fat bodies are subject to marginalization, I must admit that I think it's worse for women. This could be because women are more marginalized than men in general. Or it could be because celebrity culture — something that influences most of us more than we likely care to admit — has normalized the union of men like Kevin James with women like Steffiana De La Cruz, but very rarely does it present us with fat women paired with conventionally attractive dudes, let alone the idea that fat women can be just as worthy, intelligent, desirable, and successful as their straight size counterparts. And so... seeing plus size women break every so-called fat person rule in the sartorial world feels particularly special to me.

Fat fashion is inherently political. No, that doesn't mean every fat person who gets dressed in the morning is thinking about the social implications of their outfit, or the potential a particular ensemble could have to spark thought in someone who sees it. Nor should every fat person have to do so. But it does mean that when you grow up in a culture with deeply rooted distaste for your body type, actively breaking the guidelines that culture has molded for you is always going to feel like an act of subversion.

I don't think wearing "rule-breaking" clothes when you're fat is ever "easy" for most people. Speaking from experience, I know that no matter how good about myself I'm feeling, how smitten I am with the fat on my belly, or how sexy I think my thighs look in those hot pants, going out into the world wearing anything that doesn't hide, minimize, or conceal my fat is still a lot more difficult than sporting those outfits in my backyard and snapping some photos for Instagram.

When I do wear those outfits out into the world, people do stare. Some comment. And some might even get a little aggressive — spewing their sizeism in my face. I can honestly say that their opinions don't matter to me, at least not on a personal level. Their opinions can't change the fact that I genuinely want to be fat, and that I feel more at home in a fat body than I ever did in a thin one. But their opinions can still be draining, because they're a reminder of how far size positive activism still needs to go. They're a reminder of how "abnormal" it still is to see fat women dressed in kooky, non-"flattering" clothing of their choosing.

That's precisely why wearing "bold" fashions as a fat person is brave, though. As Everyday Feminism reported, size discrimination is something that has the potential to affect plus size people's medical services due to known biases in the community. It can increase our likelihood of conviction, impact our legal rights and earning potential, and obviously lead to immense bullying. Wearing unapologetic outfits when you're fat isn't usually just about saying, "I can look beautiful in these clothes, too," or fighting for all people to think that fat is an attractive thing. That's never going to happen, because beauty is so subjective and our attraction to people (and ourselves) varies individual to individual. To me, wearing unapologetic outfits and seeing other fat people do the same feels more like a metaphor for the grander things we still need to fight for. It's like the clothes are a vehicle of sorts.

In the same way that fashion has the power to be political when utilized alternatively by non-binary and queer individuals, so too can it be political when utilized by fat people who've grown up hearing not only that they are unattractive, but that they are inherently less worthy than everybody else. I know that many of us have been told time and time again that we are ugly, but we've also likely been told that we are lazy, unhealthy, greedy, corrupt, "everything wrong with American culture," despicable for simply existing, "better off dead." That's the world we live in. It can sometimes be easy to forget this when you're a visible fat person on the Internet who spends a lot of time talking to fellow fat activists, frequenting fat positive blogs, or immersing yourself in feminist, body positive dialogue. But the reality is that to the majority of the population, it's still OK to treat fat people like shit. It's still OK to shame them for wearing bikinis or "daring" to co-opt the fashions reserved for thin women who have actually "earned" them.

I understand the reluctance some folks have when it comes to celebrating acts and advancements that should have already been normalized. A magazine that puts three white women on its covers, but one who is curvy, or a brand that extends its size range to a 20 shouldn't be symbols of radical progressiveness. But that’s how deep issues of sizeism are. That’s how deep thin privilege runs. For years, fat individuals had very little in the way of mainstream representation. There were no magazines catering to us; no "big girl in a skinny world" in the glossies. There were no cute clothes. There were very few famous size 14 models who could even begin to represent the “average” American woman. There was no acknowledgment that beauty is subjective, and that some folks might genuinely feel more attractive in a size 14 body than in a size four one. Let alone in a size 24 body.

To me, celebrating the "bravery" of plus size women also comes from remembering the times when those acts of bravery wouldn’t have been possible; when there were no "rule breaking" clothes available; when Gabi Gregg of GabiFresh hadn't designed that two-piece galaxy swimsuit that would irrevocably change the face of the swimwear industry for plus size women.

I understand how fucked up it is that we should have to praise basic inclusion, minimal diversity, and something as seemingly simple as wearing a crop top or bathing suit out in public. But when body shaming is still such a reality, myths about fatness are still so poignant, and women are working hard to fight for that basic acceptance, it’s hard for me not to see certain things as steps towards that less fat shaming, less body policing, less health trolling, less sizeist, discriminatory existence.

Until there is no sizeism — a reality I can't even conceptualize when I consider how much progress is left to be made — being a fat woman in bold outfits and seeing other fat women in bold outfits will always feel radical and brave to me.

Showcasing those bodies in the clothes we're so often told we aren't "allowed" to wear directly confronts people with their prejudices. And I truly don't know that any progress can me made until people are so confronted with the ignorance of their prejudices that they begin to actively reevaluate why it is they feel the way they do in the first place.