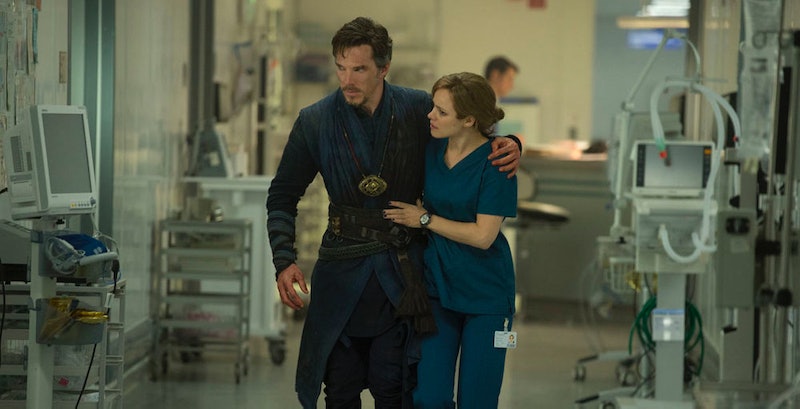 Out of all the major characters in Doctor Strange, the one who has gotten the least amount of press has got to be Christine Palmer. This is pretty surprising not only because she's played by megastar Rachel McAdams, but also because the character has a relatively lengthy history in Marvel Comics. She first appeared in the pages of Night Nurse way back in 1972, so does this mean Christine Palmer is becoming Night Nurse in the Marvel Cinematic Universe?

Maybe, but it's complicated. The first Night Nurse title only lasted four issues in 1972, and it focused on three female roommates who all worked the night shift as nurses at Metro General Hospital: Christine Palmer, Linda Carter, and Georgia Jenkins. The book, though it didn't last long, had the distinction of being a rare mainstream comic that was written by a woman, Jean Thomas. The comic didn't crossover into the mainstream Marvel Universe, and no superheroes appeared within its pages. Also, none of the characters actually went by the moniker "Night Nurse." It wasn't until 2004 when Linda Carter showed up in the pages of Daredevil that the name Night Nurse was first applied to a single character, in this instance as someone who treats superheroes in secret. But before her, there was already another nurse in Marvel Comics who was known for treating superheroes.

Fans of Marvel's Netflix series will recognize Claire Temple as someone who seems to fill the role of Night Nurse, and that's by design. The character of Claire Temple is mostly associated with Luke Cage in the comics, and the creators of Daredevil the series combined aspects of her and Linda Carter to make their own version of a Night Nurse-type character. She is even jokingly referred to as such at one point in Luke Cage. However, the series originally planned to use the name Linda Carter and have her officially be Night Nurse, but were prevented from doing so by the movie side because they had their own plans for the character, according to Eric Goldman of IGN. So what does this mean for Christine Palmer?

It probably means she'll officially become the movie version of Night Nurse at some point. I don't know why they switched from Carter to Palmer (maybe to avoid confusion with the Wonder Woman actress?) for Doctor Strange, since the character in the movie is basically Linda Carter as she's the only Night Nurse character who had a relationship with Doctor Strange in the comics. But in any case, Palmer sure seems like she's going to become the official Night Nurse of the MCU. Marvel Studios head Kevin Feige even hinted as much when he told EW's Clark Collis about Palmer becoming Night Nurse, "I will say that that story line does not play into the movie ... It’s just as much fun for us as it is for the fans to speculate about that." Rachel McAdams has also declined to answer questions related to Night Nurse, leading to more speculation that Marvel has future plans for her.

While there's no official word on Christine Palmer becoming Night Nurse in the MCU, there are plenty of clues that it could happen. Now, who wants to see her do a crossover film with Claire Temple?