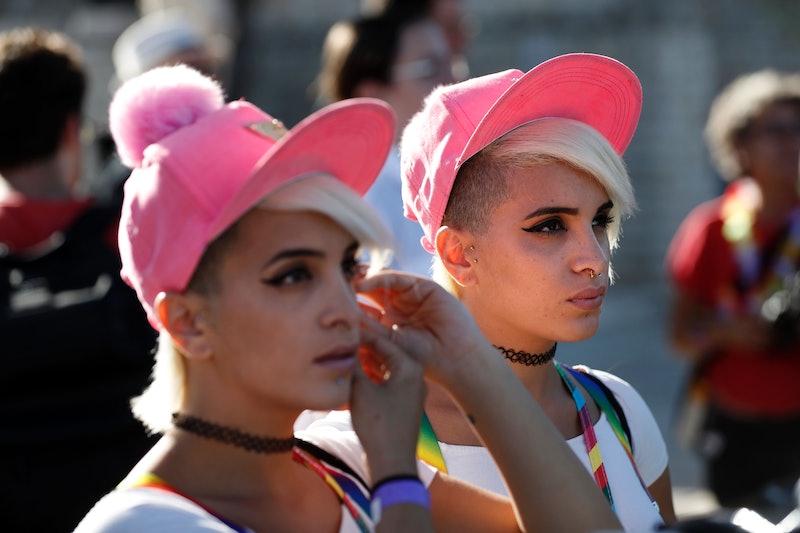 In spite of much anti-LGBTQ rhetoric, the studies continue rolling in, and the results are always the same: children of same-sex parents are totally OK. Seriously. According to an October 2016 study that appears in Developmental Psychology, children who are adopted by same-sex couples fair exactly the same as children who are adopted by opposite sex couples. Specifically, the study found that children who have same-sex adoptive parents do not experience any additional issues, such as behavioral problems or heightened stress levels; nor do they experience any more relationship adjustments or changes in family functions over time. This research is super important because it debunks the idea that same-sex couples adopting children will "harm" or "damage" children — and what's more, it demonstrates that this is the case not just for biological children, but also for adopted ones.

For many of us, this might feel like old news, but for many LGBTQ parents, adopting children is no easy task. While state laws vary, and requirements can further vary based on agencies and organizations, many same-sex couples have fought long and hard for the ability to legally adopt children. And of course, while laws changing is super important, changing the views of society also takes time and doesn't happen over-night. That's why studies such as these, which reinforce the healthy and normal lives LGBTQ people have as individuals and as parents, are so important for the community.

To conduct this study, which came out of the University of Kentucky, researchers examined 100 two-parent families, comprised of half gay and lesbian couples, and half opposite-sex couples. All of the children in these families were adopted. The assessments took place over two periods: First, when the children were in preschool, and then again five years later. Regardless of the parents' sexual orientation, the key difference in the child's development pertained to parenting stress. Basically, this means that in family dynamics which were more functional and less stressful, children performed better and behaved better, regardless of their parents' genders and orientations.

In a University of Kentucky press release on the study, author Rachel Farr, an assistant professor of psychology, explained, "Longitudinal research [like this] offers insight into what factors may be the best or strongest predictors of children's development, over and above information that can be gathered at only one time point." To our knowledge, this is the first longitudinal study to look at how adopted children of same-sex couples fair in comparison to children adopted by opposite sex couples.

Back in 2015, research showed that children raised by same-sex couples do just fine; what's more, this new study brings the specific angle of adoption into the picture, which is super important. Given that there are a shockingly high amount of children in foster care in general, it's so important that couples who are able to take in children can, including same-sex couples. There is also something to be said when we consider the disproportionately high rates of LGBTQ youth who are homeless because of their gender identity or sexual orientation. The ability for same-sex couples to foster or adopt queer youth may literally save lives of young people who have nowhere else to go.

It looks like it's time to celebrate some progress, y'all!