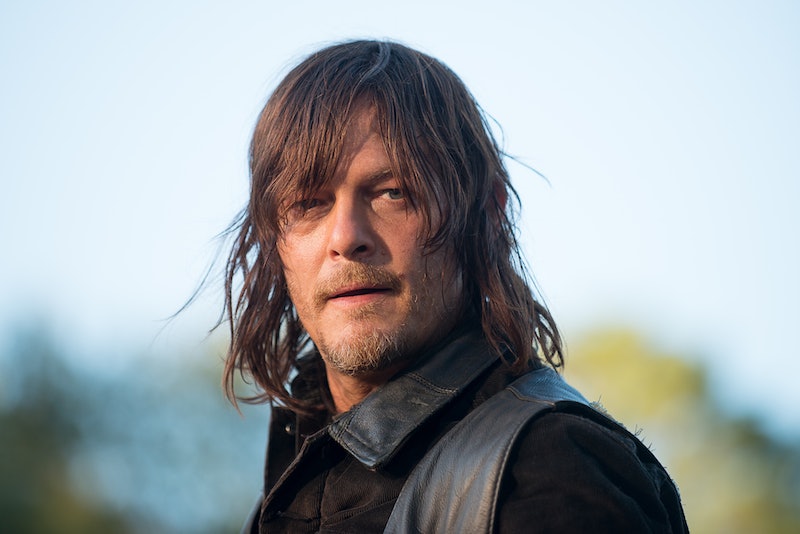 After an all-too-brief reprieve from Negan's horrifying mind games and physical torture thanks to Carol's sojourn to the Kingdom, The Walking Dead fans will once again be thrust right into the thick of things in Season 7's third episode, "The Cell," when we follow up on what happened after Negan kidnapped Daryl. It's understandable if viewers are nervous about the fan-favorite character's wellbeing at the moment; he's not exactly in Negan's good books after punching the baddie in the face, and he's also got the devious Dwight to deal with. So will Daryl die on The Walking Dead Season 7? Or will he somehow find a way out of his current predicament?

Given that promos make "The Cell" look like a heavily Daryl-centric episode, fans have good reason to be nervous. After all, it's a common TV trope to spend an hour building up a character only to kill them off at the end for emotional impact. And Daryl's portrayer, Norman Reedus, certainly doesn't sound too optimistic about the character's fate, either. "He goes into a very dark place," the actor told Entertainment Weekly about Daryl's state of mind after inadvertently causing Glenn's death in the Season 7 premiere. "He completely takes the weight of that and just carries that with him. He never forgives himself."

"Never"?? That's a pretty strong statement to make. How would Reedus know whether or not Daryl "never" forgives himself unless he already knows the end of his character's arc. Could it be that his feelings of guilt drive him to more and more desperate actions that eventually lead to his death — perhaps as soon as this week? Even if Reedus was speaking hyperbolically and Daryl's death isn't as imminent as all that, it certainly seems like directly bringing about the horrific death of one of your best friends would be the kind of thing a person might never recover from. Daryl may survive his time in "The Cell," but that doesn't mean he'll live out the season.

There are reasons other than Daryl's guilt and Reedus' comments to suspect the character's death is coming sooner than we think, too. Reedus is now pulling double duty, starring in The Walking Dead while headlining AMC's new reality series Ride With Norman Reedus at the same time. Daryl is an original creation for the show, so he's not tied to any particular storyline and is thus easy to dispose of at any time. And, given the character's trajectory from aggressive loner to valuable and sympathetic team member, Daryl's personal journey may be at an end. Where else does he really have to go — or grow — from here?

Of course, there's one not-so-small problem with this line of thinking: namely, the legions of TWD viewers who would threaten to quit the show if the writers dared kill off their favorite character. His fans are so vocal and so numerous that they've coined a well-known phrase (or threat), "If Daryl dies, we riot." Would the writers really risk their status as the highest-rated show on TV by killing off one of their most beloved characters?

Actually, that's exactly why they might do it. The show has taken a lot of flak over the past season for stunts like Glenn's fake dumpster death, Daryl's fake crossbow death, and last season's fake-out cliffhanger. Despite its reputation as a show where nobody is safe, there actually is a core group of characters who are seemingly invincible, including Rick, Carl, Daryl, Carol, and Michonne. (Probably the only reason original cast member Glenn was killed off was because the character's death is perhaps the single most iconic in the entire comic series.) The writers could make up for all those fake deaths and for their apparent gun-shyness around the show's core group all in one fell swoop by killing off Daryl Dixon.

To be clear, I'm saying they should kill Daryl; Reedus' performance is one of my favorites on the show. But there is a certain amount of logic behind the thinking that the end is coming for the lovable crossbow wielder. Episode 3 is probably too early in the season for the death of such a longstanding character… but there are plenty of weeks ahead in Season 7, and any of them could prove to be deadly for Daryl.