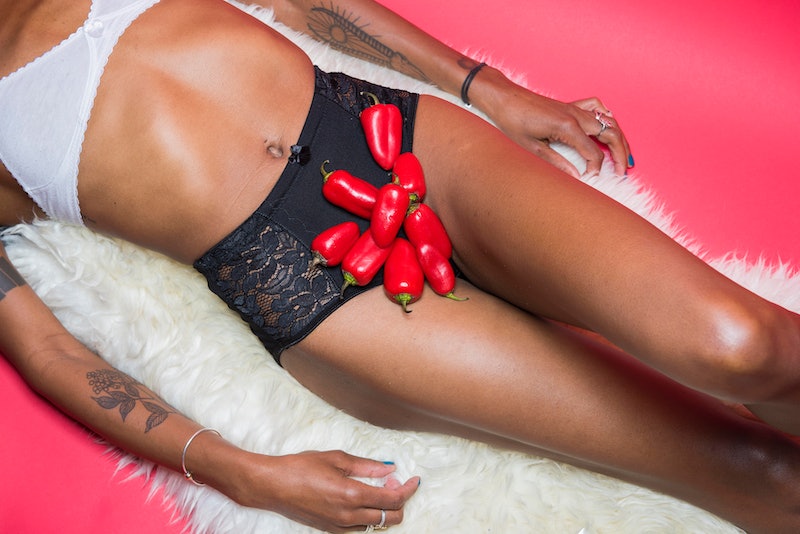 Our desire for sex is impacted by so many factors, from hormones to health to how hot the person in front of us happens to be. For those who menstruate, however, the ways your period impacts your sex drive can be powerful. There are a lot of stereotypes about sex and periods. Menstruating women have been viewed as "unclean" for centuries (and still are in certain cultures), which has inspired so stigma to hitting sheets during that time of the month. Thankfully, period stigma is waning. There are songs about how awesome it is, and plenty of articles in major media outlets discussing all the ways women can satisfy their urges — even on the heaviest of flow days.

Here's what science has to say about the links between sex and periods:

1. Your Libido Intensifies During Ovulation

File this under: obvs. Of course a body designed to procreate would experience increased arousal during peak fertility. Even if you have no interest in getting pregnant, ovulation is still peak juicy time.

2. Your Libido Can Also Intensify During Your Period

When you begin to menstruate, your body produces the least amount of progesterone, a hormone known to shut down your sex drive. Testosterone levels also start to rise after the onset of your period, which adds even more fuel to the desire fire. This is one reason why certain women feel incredibly amped for action during this time, even though it can get a little messy. But that's what Diva Cups are for, right?

3. No Period Might Mean A Lower (Or Higher) Sex Drive

The upside of hormonal birth control is that you don't need to have your period or, you know, get pregnant when you don't want to. According to a 2010 German study published in the Journal of Sexual Medicine , however, it might also dampen your sex drive, reports Stylecaster. Without the surge of sexy hormones that come with ovulation, some birth control taking women are left less-than-turned-on throughout the entire month. However, other statistics suggest that women have an increased libido when on The Pill, and some point to no changes at all. The bottom line? Every body is different.

4. A Year Or Two Before Your Final Period Sex Drive Dips

It will happen to the best of us, so why not be prepared? New research by the Wake Forest School of Medicine uncovered the time frame when a woman's sex drive starts to decline. Apparently, 20 months before your final period, hormonal shifts begin. Nearly 1,400 female subjects reported sexual function falling 0.35 percent a year afterwards until their final period. Sexual activity was on a down swing after that, but at a slower decline. The good news is that there are all kinds of medical therapies to help keep your fires burning well into old age.