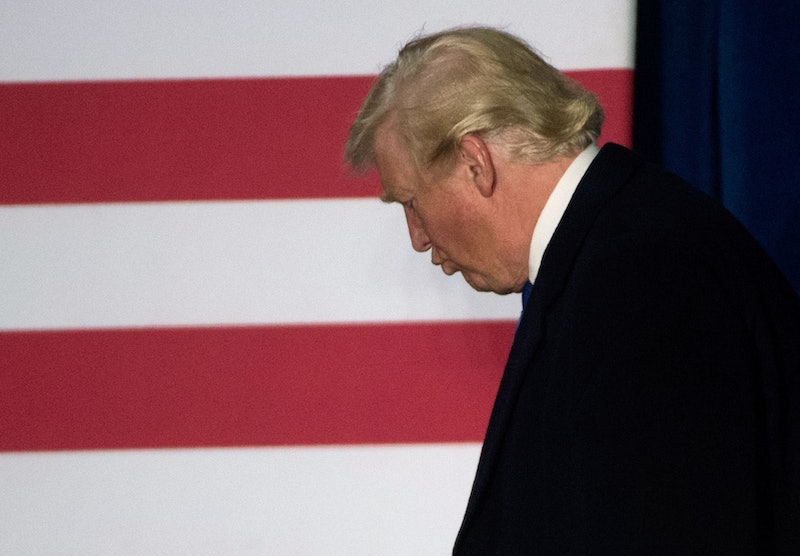 During the final presidential debate, Donald Trump made an inexcusable comment about abortion, demonstrating his level of unimaginable ignorance about the procedure: "In the ninth month, you can take the baby and rip the baby right out of the womb," he said. "Just prior to the birth of the baby."

Ripping a baby out of the womb in the ninth month is, in fact, a semi-accurate description of a c-section. His incorrect comment about this kind of procedure is easy to explain: too many men and women in America reach adulthood without any basic education in anatomy, reproductive health, or the process of childbirth. Too many boys and girls get the approved school discussion (sex will kill you; don’t do it), and then get educated by life. Too often, this means that kids grow up believing things that just aren't true: that women urinate through their vaginas; that bleeding can be held until a bathroom break; that legitimate rape cannot cause pregnancy; that it is natural to overcome reluctance in a partner in order to achieve intercourse; that abortions are carried out by organ-dealing villains who can gleefully perform the procedure on the eve of birth.

By electing and sustaining leaders who are willingly ignorant about but still zealously trying to legislate reproductive rights, we are complicit in running a country where women are still not quite people.

It may seem to the casual observer that misinformation spread by anti-choice rhetoric like this is separate from rape culture, but it is not. It may seem that Donald Trump’s willingness to cast out this kind of dangerous falsehood before a national audience is unrelated to the preponderance of accusations against him for sexual assault, but they are the exact same thing. By nominating a man like Trump, or allowing men and women like him to hold office anywhere in this country, we are upholding rape culture. By electing and sustaining leaders who are willingly ignorant about but still zealously trying to legislate reproductive rights, we are complicit in running a country where women are still not quite people.

Donald Trump can characterize the rare and heartbreaking process of late-term abortion and no doctor will be given equal time and fanfare to explain to America that what he's saying is false. All those voting against him can do is stand up and say, “That's not true,” and hope the chorus drowns him out.

After Trump’s remarks, women all over the country took to their networks and talked bravely and openly about their own late-term abortions. Some of them come from communities where the procedure is not socially accepted, no matter what the reason; LDS women, Catholic women, women who have no living children to point to for absolution. It immediately reminded me of the way survivors share stories after sexual assault. Some man commits the act and another grandstands on it, grossly misstating the facts out of ignorance or malice or some combination of the two. In order to support a victim, women gather together and tell our stories. No proof will ever be good enough; a man can be caught in the act of raping an unconscious woman behind a dumpster and suffer almost no consequences, in spite of a conviction. Donald Trump can characterize the rare and heartbreaking process of late-term abortion and no doctor will be given equal time and fanfare to explain to America that what he's saying is false. All those voting against him can do is stand up and say, “That's not true,” and hope the chorus drowns him out.

Why? Because so many people would rather not say abortion. They'd rather say “selective reduction” following a too-successful IVF implantation. They'd rather say “partial-birth” or “ripped out” than try to truly understand the reality of a late-term procedure that is meant to grant mercy in the face of the capricious cruelty of biology. That rhetoric emboldens people who don't have the facts.

The moment that gave me hope, when I realized that the tide might be turning, came during that same debate — the last one. When Donald Trump asserted that nobody respects women more than him, the audience laughed good and hard. My first instinct was to worry that they were laughing at the idea that he was right; that nobody respects women and Trump is clearing a very low bar. However, watching him grimace in response was the best possible indication that they were laughing for the right reason and even he knew it. The audience heard the lie, and for once their reaction was natural and true. People who had not pointed and laughed when Trump described a c-section and called it abortion, who had not laughed when leaked videos featured him saying terrible things about women, who had not heard the dog whistle every time he had mistakenly referred to the Secretary of State by her first name.... those people laughed at the idea that Trump respects women. I laughed along with them. I felt safe doing it.

I'm going to laugh all the way to the voting booth. I'll feel a lot safer come November 9th.

Donald Trump will lose in a free, fair democratic election, and then this nightmare will end. I hope he hears me — and those others — laughing for the rest of his life.

Meg Elison is a high school dropout and a graduate of UC Berkeley. Her debut novel, The Book of the Unnamed Midwife, won the 2014 Philip K. Dick Award. The sequel, The Book of Etta, will be published by 47North in February 2017. She lives in the San Francisco Bay Area and writes like she’s running out of time.