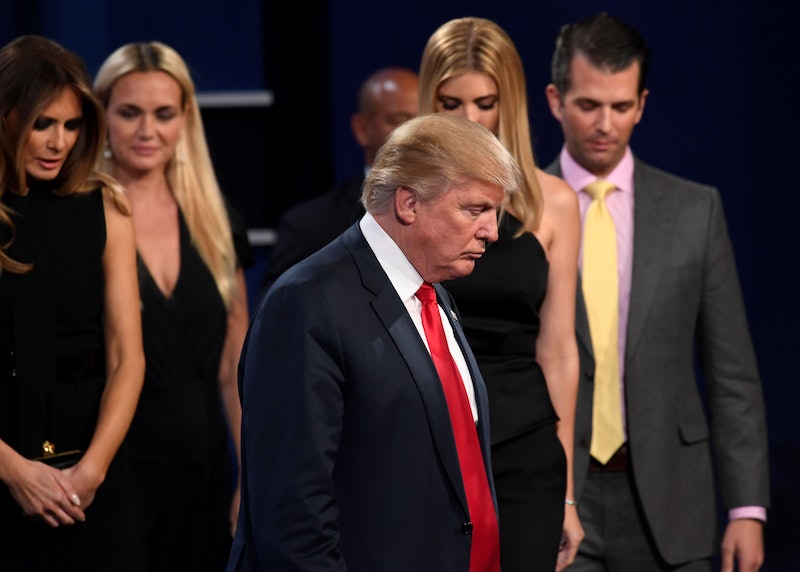 There was much to take away from the third presidential debate on Wednesday night, but one fact became clear early on: Donald Trump respects women, no matter what certain nasty individuals have to say on the subject. Since the release of a 2005 tape in which the Republican presidential nominee brags about kissing and groping women without their consent, followed by accusations of alleged sexual assault from numerous women, Trump's behavior toward women has come under intense international scrutiny. (For his part, Trump denies these allegations.) However, as he stated repeatedly at the debate on Wednesday, nobody loves the ladies like Trump loves the ladies. Unless the lady in question is Hillary Clinton, because she's just nasty.

Trump has demonstrated his profound respect for women throughout his political campaign, and, indeed, throughout his life. What else but respect would have motivated his decision to nickname former Miss Universe Alicia Machado "Miss Piggy," or to approve of someone calling his daughter, Ivanka, a "piece of ass"? But perhaps the most compelling piece of evidence is Trump's insistence that he is a champion of women's rights. Anyone who spends that much time talking about gender equality must spend just as much time devoting his life to the cause.

We could all learn from such a shining example of treating women with decency and respect. To that end, I give you the Donald Trump Guide to Respecting Women, as informed by the third presidential debate.

One of the most basic ways to respect women is also one of the easiest: Never, ever apologize. As a man, your duty is to brazenly blunder your way through everything, up to and including allegations of sexual assault. To apologize is to show weakness and — worst of all fates — admit culpability. Despite what they may say, women don't really want men to admit to wrongdoing, because that would shatter your image as an ultra-masculine ideal. The best way to respect a woman is to downplay her concerns; eventually, she'll realize that you were correct all along.

Men are obviously born knowing more than women, so do the ladies a favor by fact-checking everything they say, even if your facts are totally made up. Don't worry about interrupting; anything a man says is automatically more important than a woman's opinion. If they make a statement you find questionable, shout "Wrong!" as loudly as possible. This should bring their train of thought to a crashing halt, after which you can rest safely in the knowledge that you kept a woman from filling her head with dangerous ideas, like prioritizing her career or reaching middle age.

Does a woman fail to meet your specifications? Call her out on it as pointedly and publicly as possible. Mr. Trump favors terms like "nasty" and "disgusting," but feel free to get creative. It might not seem respectful while you're calling someone names, but ultimately, your target will thank you for the constructive criticism.

You know what women love? Babies. They just can't get enough of 'em. To display your deep understanding of the female mind, use schoolyard tactics to communicate with the opposite sex. It's like brushing up on a language before you visit a country where it's spoken. Women have a natural affinity for kids, so the more childish you act, the more likely they are to understand you and be flattered by your effort.

Mr. Trump demonstrated this admirably in the debate when Clinton referred to him as a "puppet" of Vladimir Putin. Like any man who respects his opponent, he turned it around on Clinton. "No puppet. No puppet," he interrupted, taking a cue from your playground arch-nemesis. "You're the puppet!" The "I know you are, but what am I?" defense: It's powerful stuff.

One of the highest compliments a man can give a woman is his attention. How are women supposed to know they're hot unless someone tells them? As such, forget everything you thought you knew about personal space. Recent events indicate that grabbing them by the lady bits without their go-ahead doesn't go over well, but looming several feet behind a woman is a classic tactic.

Above all, the best way to respect women is to make decisions for them. Unlike men, women are inherently illogical, and they appreciate it when men take time out of their busy schedules to steer them in the right direction. Do you know a woman who gained a few pounds? Warn her off cake for the foreseeable future. Did someone bring up abortion? Make sure all women in the vicinity know you, a man who will never be confronted with such a decision, think the procedure should be punishable by law.

If you're unfamiliar with the subject, forge ahead anyway. No decision is too big or too small for your input. After all, as a man, your understanding of the world is inherently superior to a woman's, and she'll be grateful for the attention. It shows you respect her existence enough to keep her from getting into trouble. Who knows what kind of mistakes women would make without men to guide them?

Keep these guidelines in mind, and you should be respecting the hell out of women by Election Day.

Editor's note: This post is satire. "I know you are, but what am I?" obviously fails to be an effective defense for anyone over the age of five.