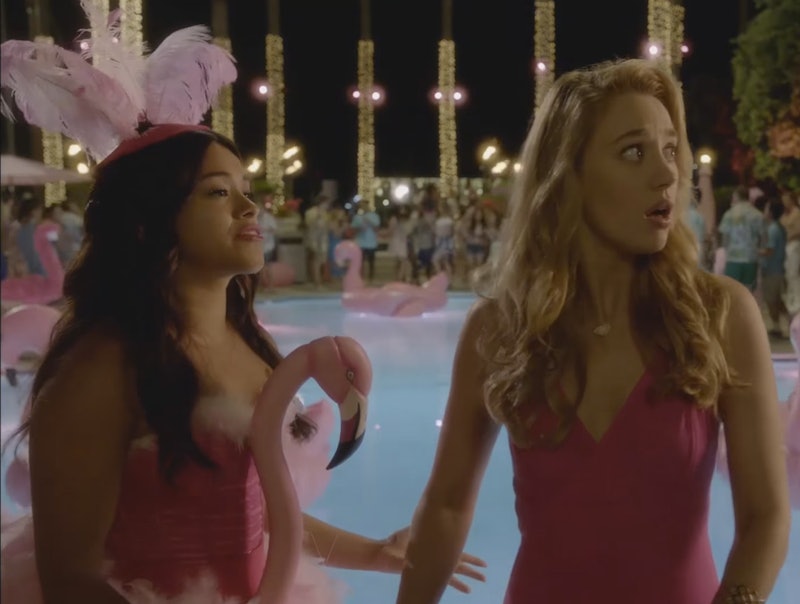 Phew, just as viewers and the narrator were getting really worried that no one would figure out that Petra's sister was pretending to be her on Jane the Virgin, our intelligent leading lady solved it. While you would think it would have been Petra's ex-husband Rafael to realize that something wasn't quite right with Petra (especially after sleeping with her in the Season 2 finale!), it took Jane stepping in to start wondering if Petra was actually Anezka on Jane the Virgin.

After Jane approached "Petra" about the bad working conditions under Anezka's new boyfriend Scott, Jane started to realize that something was off with her "sister wife" (kudos to Lina for that). Jane was even more confused when she found out that Petra had been subsidizing the rent for her and Michael so they could afford their own apartment. It led to an awkward dinner date with Jane and Michael and Anezka/Petra and Scott, where Jane asked "Petra" if she was with Scott because she was being blackmailed by him. (Hey, it had happened to Petra before with Milos.) Anezka stormed out, insulted by the question, and Jane was left feeling guilty and even more confused than before.

Now, to be fair to Rafael, he had been suspicious of Petra's behavior, so it was actually his theory that she was being blackmailed by Scott. I mean, everyone knew that the real Petra would never willingly date Scott. But unfortunately for Jane, Rafael had been off base.

Later, at the Marbella pool during flamingo night, Jane and Anezka had a serious showdown — complete with a telenovela cat fight — and Jane decided she no longer needed Petra in her life. Thankfully, Jane still needed to go to the Marbella to visit the father of her and Petra's children. When "Petra" gave a telltale Anezka squeak, it made Jane realize that there might be some twin swapping going down.

The timing couldn't have been more perfect since Anezka was being pressured to sell Petra's hotel shares by her mom's new prison buddy. Anezka decided to blackmail Rafael (Jane the Virgin loves its blackmail) with the information that he had hidden his father's illegal financial activity after he died. So Jane telling Rafael that Petra might be Anezka could not only save the Marbella — it could also save Rafael from jail once again.

While Rafael's fate and the finances of the Marbella are important, the thing I'm most excited about Jane's revelation is that the real Petra can finally emerge from her immobilized state. Although I'm not confident that Petra won't be bitter it took everyone so long to figure out that Anezka had been playing them, she at least will be grateful to Jane for being the one to solve it. Jane and Petra went through lots of ups and downs in Season 2, but I want them back on the train to friendship in Season 3. These women make much better allies than foes and some of Jane the Virgin's best moments are when the show explores their complicated relationship.

But before any of that can happen, Jane and Rafael are going to have to deal with Anezka — and more importantly, Petra and Anezka's mother, who most certainly won't go down without a fight. Because even when a mystery is solved, there's never a dull moment on Jane the Virgin.