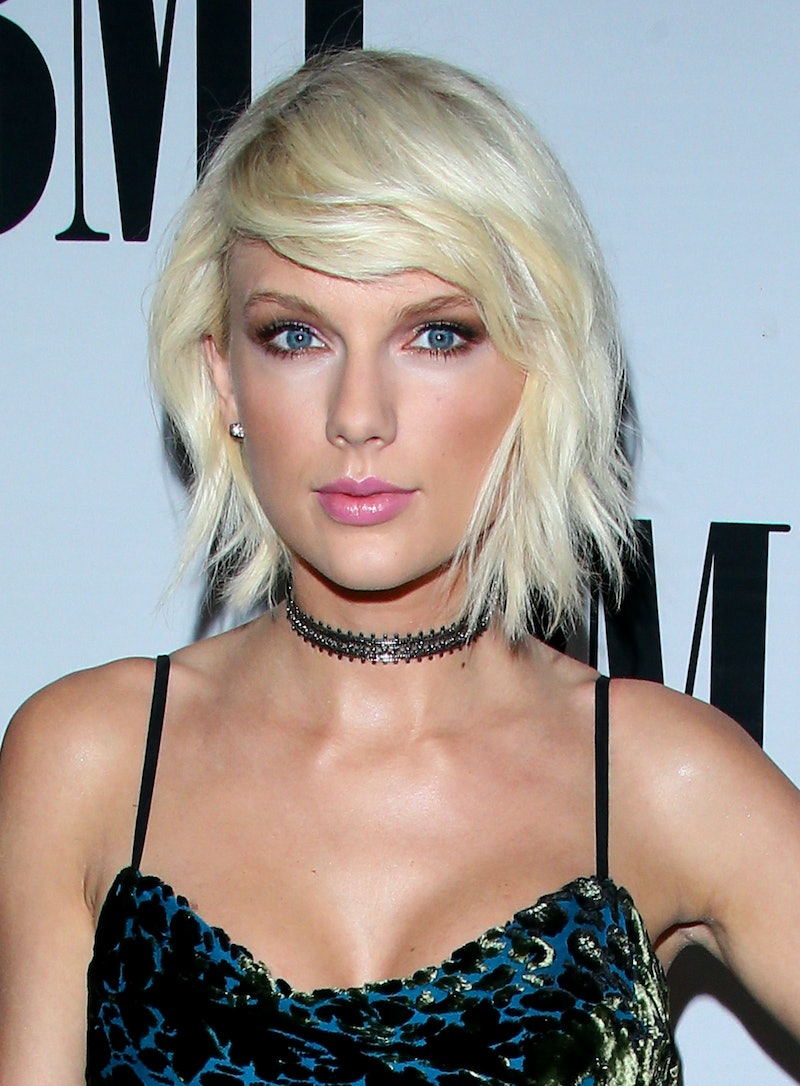 It's pretty amazing how much celebrity influence can sway a vote, and this is more true than ever during the 2016 election season. Case in point: "Who Is Taylor Swift voting for?" is one of the most popular Google searches right now. The nation, especially the Swiftie Nation, needs to know. However, the pop starlet has remained especially mum, leading people to wonder if Swift is voting for Donald Trump.

Now there is, at least, substantial evidence that Swift did vote today, and she was encouraging her fans and followers to do the same. Early on Tuesday, Swift posted an Instagram captioned, "Today is the day. Go out and VOTE" (festive American flag emoji included). But what evidence to we have to support that Trump theory? Here is a few key points that conspirators are making right now.

In Swift's girl gang, there are veritable tiers of besties, and it goes without saying that Kloss is on that top tier. Fans all know they're solidly linked together, the dream team of celebrity fan fiction. However, sometimes people forget that Kloss has been dating Joshua Kushner, the brother of Ivanka Trump's husband Jared Kushner, for four years. Whaaaaat? So some would draw conclusions that there may be a sway there, through her true love's true love.

However, in an article for Esquire, a representative for Joshua Kushner stated that he is a proud Democrat and will not be voting for Trump in this upcoming election. Let's strike this one from the record.

Case B: Katy Perry Is With Her

As in, with Clinton. And fans all know the deep history of bad blood between these two singers. Of course, it seems incredibly petty that Swift would deny a candidate support just because Perry is flying her flag for high for Clinton. However, this is the same Swift who quite possibly dedicated an entire video lined with her whole squad as a low-key attack on the singer.

Ultimately, I'd like to think that Swift wouldn't damn the entire country because of a feud. But that spiteful streak is definitely there, and Lord(e) knows how deep it runs.

Case C: Swift Hasn't Thrown Her Weight Behind One Opponent Or Another

I've already discussed this, but let's just delve into it a bit deeper: Swift hasn't been vocal about supporting anyone, right? So doesn't that, in itself, seem inherently suspect?

Historically, no. Swift worries about doing anything that really isolates her fans, and that definitely includes getting political. Back in 2009, Swift dodged questions about her political leanings in Rolling Stone, before relenting that she was fine with the outcome of the election. "I've never seen this country so happy about a political decision in my entire time of being alive," she said at the time. "I'm so glad this was my first election." That's a very neutral-sounding statement, to say the least.

Likewise, the 2012 election had Swift citing a lack of personal wisdom to push her fans in one direction or another: "I just feel like I don't have enough wisdom about myself as a person yet to go out there and say to 20 million followers on Twitter, and these people on Facebook, and whoever else is reading whatever interview I do, 'Vote for this person,'" she said in an NPR interview.

Short version: Swift not speaking out isn't really a clue that she's pro-Trump, so much as it is a clue that she will not damage her brand by picking a side. No, thank you.

Case D: Trump Is A Swiftie

OK, that is a bold assertion, but let's talk about that one time that Trump tweeted (of course) about his love for Swift? In 2012, Trump said he was so glad Swift was co-hosting the Grammy nominations and said, "Taylor is terrific!" Why does that slightly creep me out?

The hilarious assertion here would be that Swift wouldn't want to let down her biggest fan in the world and would throw him a pity vote. I can easily say, with a relatively strong conviction, that Swift is not concerned about a tweet from four years ago. So of all the potential influencers here, I'm going to go with "nah" on this one.

At the end of the day, I want to believe that Swift's personal convictions would still lean toward Clinton, and that her actual vote (because she is voting) would count toward the Democratic nominee. Crazier things have happened, but rational thinking would assume she's only keeping quiet to keep her fans from tearing each other (and her) apart. Looking at the comment section in the Instagram, the Swifties seem to be divided, so I get it. I get not wanting to cave to that pressure.

However, that also suggests that this hugely influential woman, literally one of Time's top most influential people, could've used her voice to sway the youth vote in a positive way. No, it isn't an actual obligation, it's just about using your power to create a better future. I will concede that at least she peeped up to encourage her fans to vote — even though, when it comes to this election, she seems more concerned about Taymerica.