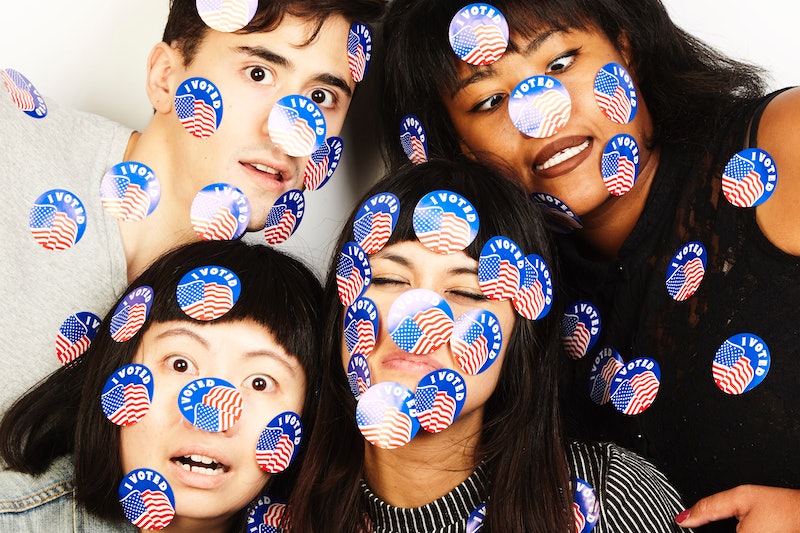 The 2016 election season has been unprecedentedly long and full of ridiculous name-calling, false accusations, and some really troubling hateful speech that is taking a toll on the mental health of Americans. There is no better way to wait it out for the new president to be announced than to throw a party on election night — to relieve stress of course. To mark the end of this particularly troubling election season, host your very own election party with some of your favorite politically-active friends. By the end of the night on Tuesday, Nov 8, 2016, this election season will be officially (finally) over.

"Election night is likely the most stressful part of the day — don't do election night alone!" Dr. Jennifer Caudle, Family Physician, Assistant Professor at Rowan University School of Osteopathic Medicine, tells Bustle. "Whatever you do, make sure you are around others to be able to talk about your feelings and feel a sense of community. Make it a party, play games, and throw in other fun activities during the night to add levity. This will also help lessen stress!"

Of course, an election party has the potential be tense depending on who you are inviting, so keep things light and celebratory to ward off any angry fighting between guests. Also, don't get too caught up in your party and make sure you follow along with the live election coverage on TV so you don’t miss a thing and prepare plenty of games, food, and drinks to keep your friends celebrating and entertained until our new president is announced. Here are some last-minute ways to get in the election spirit and celebrate.

If you don’t have the time to get a bunch of helium balloons, pick up a few bags of red, white, and blue latex balloons and cover the floors of your apartment with patriotic balloons. You can even find some printed stars or stripes balloons like these ones from Etsy ($5). Every time people walk around, the balloons will move and it will be your very own DNC.

If you didn’t have time to install your very own party lighting when you moved in, keep the lights low. Low lighting will make everyone relax a little bit — and save you some $$$ on your electric bill. Win win!

Keep the good feelings alive and relieve the stress from this election season with an abundance of festive (alcoholic) beverages.

I don’t know about you, but I’m not about to stuff dozens of mushroom caps for anyone tonight. Picking up a bunch of finger foods is fast way to feed tons of people and you can pick up a variety of snacks like Amy’s Taquitos .Throw them in your toaster oven as needed throughout the night and never have to worry about running out or taking time away from your guests to prepare food in the kitchen.

Dessert doesn’t have to be a big production of mixing, whipping, and baking. Pick up some donkey and elephant cookies as a nod to the two-party system, or make your own cut-outs with cookie cutters like these from Etsy ($11)

You’re going to need something to drink, so why not make it a red, white, and bubbly one? Try out The Kitchn's two-ingredient wine sparklers. Get the recipe here.

Trump likes to use a lot of the same — often made up — words. Like: HUUUGE, bigly, WRONG, phenomenal, crooked, nasty, loser, moron, criminal, etc. Try playing Scrabble with your party guests, using only words that Trump over-uses.

If you’re a Millennial who hasn’t even seen a Scrabble board, you have definitely heard of Cards Against Humanity. Create your own Clinton, Kaine, Trump, and Pence subject cards. Whoever’s hand is too real wins. And if you or none of your guests somehow don’t have a set, pick up a set from Target on your way home ($25).

9. End The Night On A Positive Note

When your guests arrive, have them write down something they are grateful for or something that makes them happy. As the election winds down take turns reading them to put everything into perspective.