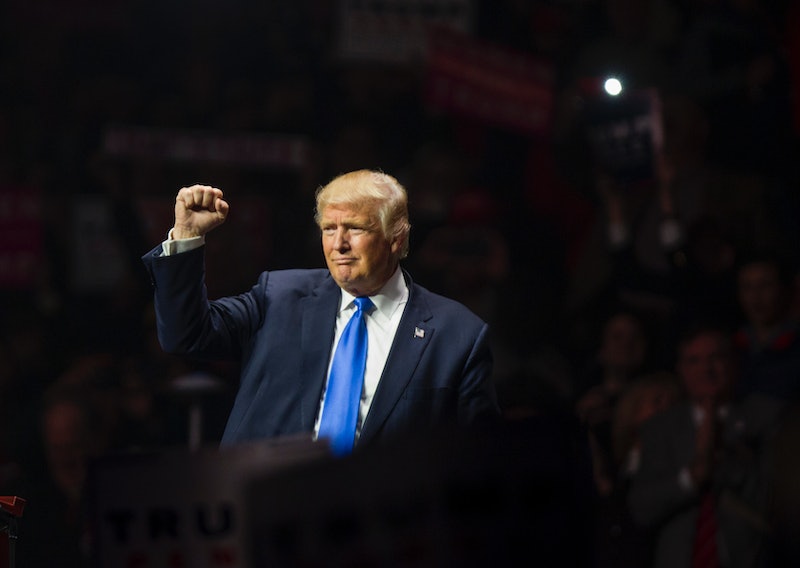 Women have always known rape culture exists, despite all the people who told us it was our fault for dressing a certain way, for drinking too much, for walking into an unsafe situation. Women have always known how to behave in public to make ourselves feel safe. And I don't mean "dressing modestly." I mean, putting on headphones every morning to discourage men from yelling sexual advances at you as you walk to work. I mean crossing the street at one o'clock in the afternoon, because some guy grabbed your arm and pulled you towards him as you passed. I mean switching cars on the subway, because some dude didn't appreciate it when you asked him to remove his hand from your thigh.

Early Wednesday morning, Americans decided that Donald Trump deserves to be president of the United States. Which means, of course, that a candidate for president who displayed blatant disregard for women on a national platform, wasn't punished for it. He was accepted. He was celebrated. His supporters attempted to normalize his behavior, and I fear they succeeded. Sure, plenty of people said that Donald Trump's behavior towards women was disgusting and unacceptable. But so many others — too many others — dismissed his rhetoric as "locker room talk."

Rape culture is instilled in our subconsciouses in childhood, so it's vital that we vote for politicians and ballot measures that will ensure our children have access to comprehensive sex education that addresses reproductive rights, contraception, and consent. Today, just 24 states mandate sex education. If we want to change those numbers, we have to do the work. Donate to Planned Parenthood Action Fund, which works to ensure that federal and state governments mandate sex education programs.

2. Teach Your Children About Affirmative Consent

3. Campaign In 2018 For Candidates Who Fight Against Systems Of Oppression

The midterm elections don't get nearly as much attention as presidential elections, but they are incredibly important. Beginning in January, Republicans will control the executive branch, the Congress, and the Senate, so it's vital that Americans educate themselves on the candidates running for Congress in 2018. Start your research now, and learn which candidates are in support of Planned Parenthood, comprehensive sexual education, LGBTQ+ rights, immigrant rights, reproductive rights, and more.

4. Educate Yourself And Others On The Dangers Of Toxic Masculinity

When I say toxic masculinity, I'm referring to the cultural construction of manhood that demands that men be strong, that men act as "protectors," that men are stoic and unemotional and in control at all times. Toxic masculinity encourages aggression, violence, homophobia, and misogyny among men, and it discourages open communication and vulnerability. It's bad for women and men, and we can't begin to deconstruct rape culture without first educating ourselves on its dangers.

Rape culture isn't solely about sexual violence; rape culture is a system of oppression, and as such, it disproportionately affects marginalized people. In order to fight rape culture, we need to work together — and that means dismantling gender norms and speaking across cultural lines. For a primer on intersectional feminism, take a look at this reading list.

Educate yourself, fight the good fight, and remember that when they go low, we go high. Let's get ready for 2020.

More like this
Black Women's Equal Pay Day Highlights An Upsetting Problem
By Brandi Neal
Women Around The World Are Cutting Their Hair In Solidarity With Mahsa Amini
By Darshita Goyal
Chris Kaba's Family Continue Fight For Justice After Viewing Police Bodycam Footage
By Sophie McEvoy
Here’s Your Daily Horoscope For September 28, 2022
By Mecca Woods
Get Even More From Bustle — Sign Up For The Newsletter