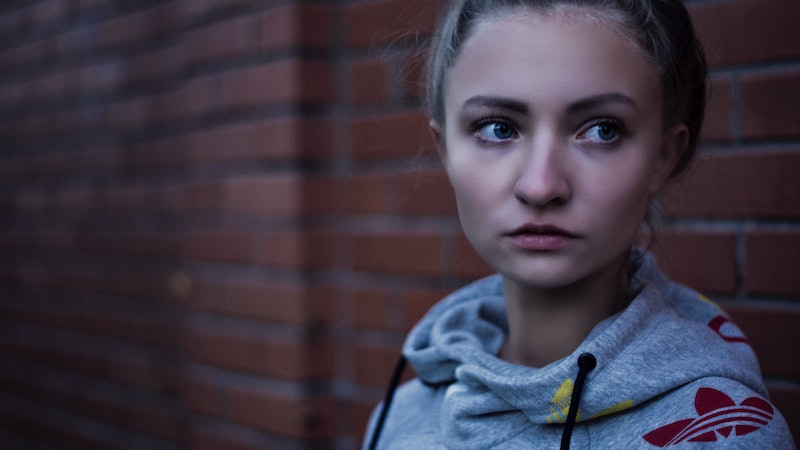 For many of us, Donald Trump being elected president after a polarizing campaign came as a shock. Despite polls leading up to the election showing Clinton holding a substantial lead, ultimately the electoral college worked in Trump's favor and he is the president-elect. For many, this is stressful, scary, and disappointing. These feelings are normal, but remember that there are ways to cope and fight for what you believe in. This does not have to be the beginning of the end, and having difficult conversations can be a way to get through it.

“Your level of stress after the election will correlate with whether your favored candidate won. If your candidate won, your primary stress will be engaging with friends who voted for the other candidate and their emotions,” Psychoanalyst Dr. Deb Sandella tells Bustle. “For this person, it is time to reconcile relationships with your friends, family, coworkers and Americans who hold opposite political views. If your candidate lost and your greatest fear of a president wins, you have some big de-stressing to do.” Part of moving forward is learning from each other and recognizing that we all cope differently. It may take some time to move forward, but we'll get there.

But what if you're mourning while your family members are celebrating this election? There's a great deal of anxiety about discussing political views, especially with those close to home because these are people that we love and care for, and (hopefully) whose opinions we respect. “Disagreeing politically runs the risk that they'll withdraw their love and affection from us, or that their opinions will tarnish the image we hold of them and no longer see them in the same light,” Psychologist Erika Martinez tells Bustle.

In addition to fearing that the way we see people we love will change, many people simply don’t know how to talk about differing views. “Most people don't know how to argue in healthy ways," Martinez says. "For others, their self-worth is so contingent on being 'liked' that they don't speak up at all,"

Here are some ways to approach talking controversial politics with the people you love.

The only way to learn sometimes is to ask questions. You’ve heard the comments made by Trump — "bad hombres" and "grab them by the pussy," to name a few. Trying to understand where a loved one is coming from begins with asking genuine questions. “Approach Trump supporters with curiosity and a genuine desire to understand where they're coming from; not with righteous indignation,” says Martinez. Some questions you might ask are: Why did you vote for him? Why didn't you vote for her? Was there a certain issue that he spoke to that appealed to you more? Was there something she could have said or done better? something she didn't do or say?

… And Listen To Their Answers

Really listen to them. Instead of going on the defensive right away (we are all guilty of this), really listen to their answers and their views. You don’t need to agree with them, but it is so important to show the people you care about that even when you disagree, you value them. It might seem impossible that you could spend time listening to people rationalize, but it’s important to let people be heard.

After you’ve heard your loved ones, it’s time to discuss. You undoubtedly will have differing perspectives and views, but it’s important to have a calm, respectful discussion to exchange ideas. It’s a tense, polarizing thing to discuss, so keep in mind your tone and remind your family to keep their’s in check too.

Sharing is powerful. Taking your knowledge and your lived experience and sharing that with people who disagree with you can be incredibly effective. Sharing what you believe in — women's rights, immigration, supporting planned parenthood, the gender pay gap — is so important because it gives your loved ones concrete and powerful examples of what you stand for. There is no guarantee that you can change someone’s mind, but it’s a start to helping them see things from your perspective. Even if your family doesn't agree with you, know that you are not alone in your beliefs.

"Relationships are what what lead to a happy and fulfilled life," psychologist, image consultant and dating expert Dr. Jennifer Rhodes tells Bustle. "Now more than ever we all need to cultivate happy personal and business relationships. Gratitude can also help mitigate depression. Taking the time to speak with people you love about what you are grateful for will help tremendously." Now is the time to exchange ideas within your families and learn from each other.