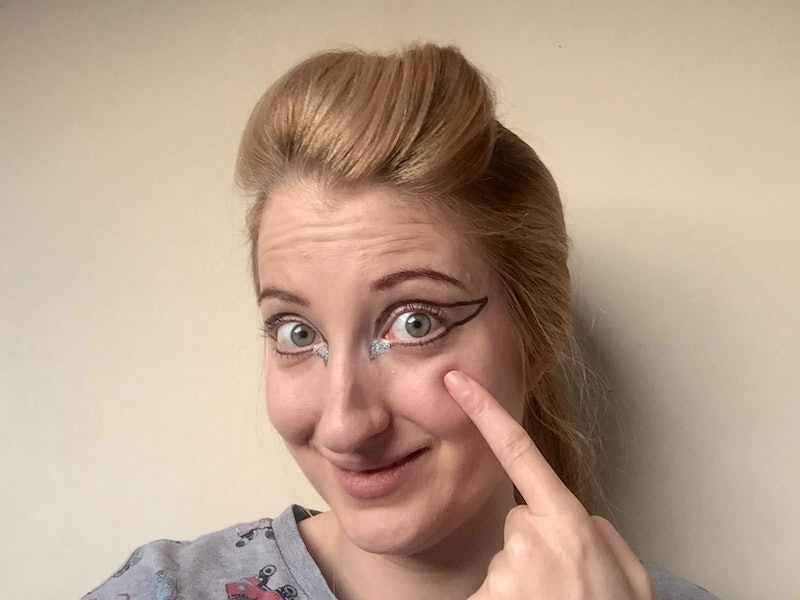 Anyone who follows my beauty escapades knows that I love testing out high fashion trends to see how they work IRL. When I spied a new, quirky beauty trend on the runway, I couldn’t resist. Thus, I tried the graphic eyeliner trend to see how it translated from the catwalk to the sidewalk.

I spotted this particular trend over in Vogue. Besides the fact that when Vogue says something’s a trend, you should nod your head in agreement, this unusual eye look had been cropping up all over the autumn/winter 2016 catwalks to boot. According to Vogue, “The New Liner: Super-Graphic” trend made appearances at Altuzarra, Kenzo, Oscar de la Renta, Giamba, Fendi, and Peter Philips. Of course, all of the designers gave their models a different take on this theatrical eyeliner look, but IMO, the underlying connection was the contemporary, pop-art-esque theme, as if the models were characters who had just leapt from the pages of a stylized graphic novel.

So I picked my favourite look of the bunch — Kenzo — and I tried graphic eyeliner IRL, to see how it worked while worn on a human living through the trials and tribulations of everyday life. Let’s say I gave it a dry run for y’all, because I’m nice like that.

Among the edgy graphic eyeliner looks, Kenzo's stuck out for me; blame it on the addition of glitter. The models walking the Kenzo Autumn/Winter 2016 Ready-To-Wear runway were given OTT outlines of winged eyeliner, with a smattering of silver sparkle in the innermost corners of their eyes. There appeared to be a few variations on the look, which presumably were created to complement the clothing and/or the model's look or personality. Whatever the reason behind this kooky eyeliner, it was simply epic.

However, as a performer and someone who grew up with a dance teacher mom — which meant I was basically on stage as soon as I could walk — I could tell this eyeliner design was eye-catching from afar, but I wasn't so sure how it would look in the streets or in stores, standing next to other humans, or passing them close-by on the street. Graphic eyeliner is one of those looks that you wouldn't blink an eye at if you saw someone wearing it while in a play, but I imagine it would be a whole other story if you were having a conversation with them out of the context of the theatre. I was eager to see what the folks of my small town in Northern England would think.

As graphic eyeliner is obvs an eye look, I began by giving myself a natural makeup look, while leaving my eyes bare.

At first, I felt intimidated by the boldness of this look, but I realized I could break it down by drawing myself a stencil of sorts. I used a lighter colored eyeliner to roughly mark out where I wanted to draw next, before going in with a black kohl eyeliner.

While I'm definitely no artist, or a pro at makeup, I was quite pleased with my new (albeit wonky) eyeliner.

It was incredibly difficult to get the wings exactly the same, so I settled with two slightly different ones, as I knew my whole face would end up in a huge, splodgy mess if I tried to get them even.

But, I noticed that I'd messed up the eyeliner on my right eyelid.

So I used a baby wipe to rectify the situation, but that was the only major edit I made.

After this, I went into the inner corners of my eyes with my Lime Crime Glitter Helper and a sprinkle of Lime Crime Zodiac Glitter in "Ophiuchus."

Although it wasn't quite perfect, I was pretty proud of how this turned out. If you've ever seen my drawings of people — that aren't much better than stick figures — you'll know this was a makeup win for me!

To put you in the picture, I'll normally try any fashion or beauty trend, even though I might feel a little self-conscious or silly, because I think it's great to continually push myself out of my comfort zone. However, I'd been cooped up inside for the best part of ten days, suffering from a chest infection, so I was feeling a little vulnerable.

When I stepped foot out of my front door, I was feeling slightly nervous, due to the fact that my hometown isn't the most cosmopolitan of places — it's over 200 miles to London, the fashion capital of England. This distance sometimes affects my fashion choices, because in London, I feel I can get away with way more flamboyant outfits without people batting an eyelid, whereas in my small town, from past experience, I feel people look at my quirky attire as if I'm an alien.

At the start of my journey on the first couple of streets, I was safe. People were either too busy in what they were doing or they just wanted to escape the freezing cold ASAP. However, I grew hesitant when a group of teenage boys — who in my experience, are often ruthless when it comes to aesthetics — were about to pass me on the sidewalk. As I passed them, I thought I'd escaped negative comments, but, just when they thought I was out of earshot, one of them asked his friend, "What the f*ck was up with her eyes?" I knew at this point that my new look wasn't subtle in the slightest.

My first stop was my local vegan store that has a yoga studio in the back. I was greeted by a kind store assistant and bumped into many yoga-goers, but none of them said a word, although I did notice them clocking my unusual look. I wanted to scream, "This isn't how I normally do my makeup! I can do eyeliner... sort of!" But of course, in true British fashion, I pursed my lips, thanked the assistant for her help, and left.

After this, I made my way to my favorite coffee shop. On my travels there were a couple of lingering glances, but nothing to write home about. As I'm a regular at this spot, the barista knows me by name, and he told me my eyeliner was, "striking" which I believe was a compliment. My friend works in this coffee shop too and she informed me that she thought my new look was "dramatic," which I also took as a compliment, due to the positive tone of her voice. It wasn't long before her dad popped in and he told me my eyes were "lovely," which was a wonderful comment that I definitely wasn't expecting. By the time I'd received his comment, I had actually forgotten that I was wearing such avant-garde makeup, so it was a nice surprise to hear his positive opinion on it.

All in all, I think if you like this look, you should definitely go for it. If you're a creative person who likes to experiment with makeup and you don't mind a bit of attention, it's definitely one to try on for size. At the end of the day, as Taylor Swift so succinctly puts it, haters are always gonna' hate and there are always going to be people out there who don't like others being different or expressing themselves. So surround yourself with positive people and folks you love and admire and rock whatever kind of eyeliner (or any other bold makeup look) you want.