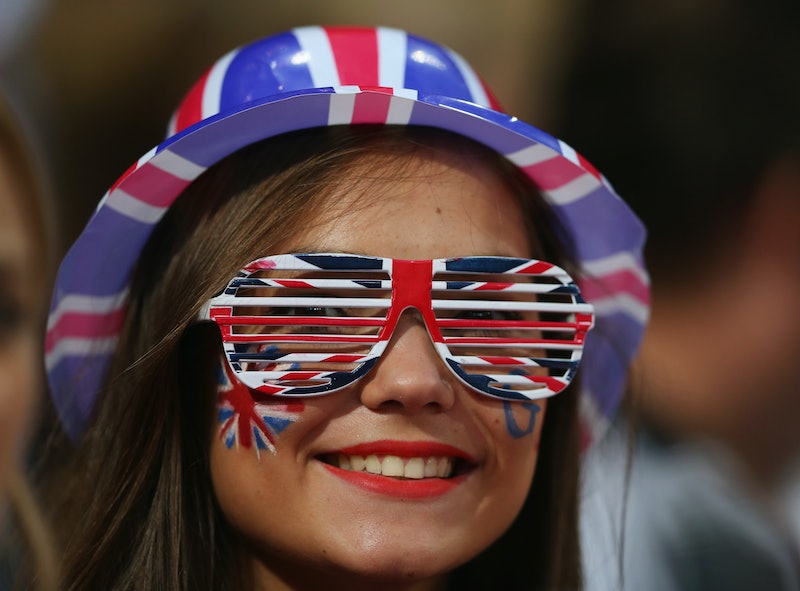 Our country may have decided we were over being part of the British Empire more than two centuries ago, but that doesn’t mean that we can’t still have an affinity for many aspects their culture. Great Britain has a lot to offer, whether you’re a die-hard Anglophile or you’re just obsessed with Downton Abbey. Not only is their history is exciting and scandalous, Britain has also given us everything from our Founding Fathers to the Beatles to our love for the royal family.

In Stuff Brits Like: A Guide to What’s Great About Great Britain , author Fraser McAlpine brings us through an extensive — though admittedly not comprehensive — list of, well, stuff Brits like. His hilarious look at his own culture goes beyond the basics, such as remembering to call soccer "football," and gets into habits and traditions of the people who live in the countries that make up Great Britain. The topics discussed in his book range from desserts with unappetizing (not to mention kind of inappropriate) names to crossdressing.

Through McAlpine’s highly amusing explanations, you’ll find yourself wondering how the pilgrims neglected to bring some of these traditions across the pond to the new world. Warning: You may find yourself planning a trip to the British Isles after reading this book.

Wishing you could get in on the fun? Keep calm and try these 10 tips for adding more aspects of British culture to your everyday life, inspired by McAlpine's guide:

Brits are known for their good manners, in part because of their habit of apologizing constantly — especially when it’s completely unnecessary. They’re also great at queuing, even if they don’t like to, because order is important to them. McAlpine attributes both of these traits to Brits’ social awkwardness, but whatever the reason, try it out. Get in line, and if someone bumps into you, be sure to say you’re sorry. It’s the British thing to do.

Get Serious About Tea

“Tea isn’t merely a drink,” says McAlpine. “It’s a way of life.” Serve it to deal with all emotions and for all occasions. If you’re comforting a friend with a broken heart, de-stressing, and even just getting ready for bed, you absolutely must put the kettle on. Just don’t forget to serve it with appropriate snacks.

Adjust Your Sense of Humor

For Brits, “a sense of humor is like a fine martini: the dryer it is, the better,” according to McAlpine. Banter, aka joking around with others, is a national pastime. Sarcasm is never off limits, even when you’re discussing a loved one’s recent death. Your goal is to make it as unclear as possible whether or not you were serious so you can keep everyone guessing. Wordplay is also key, and you get extra points for making it dirty. If you need help, study up by watching pros, because Brits love comedy.

Too much emotion in public is always a bad thing. People will find it “a bit much,” so you need to find a way to lock those pesky feelings down when you’re out and about. Seriously, nothing warrants outburst, if you ask McAlpine — not even broken bones, broken hearts or broken ranks.

Become a Regular at a Pub

Pubs aren’t a place to go get trashed; that’s what bars and clubs are for. Pubs are “the hub of all social interactions in British communities,” writes McAlpine. They’re where Brits gather to catch up on local news, share information, banter with neighbors and friends, relax, and even celebrate meaningful events. You can watch sporting events on TV, play games, and test your knowledge in pub quizzes. All you need is a pint and you’ll fit right in. Feel free to bring your dog along with you. The health inspector might not like it, but it’s what a Brit would do.

Get Into Football (and Stop Calling It "Soccer")

“No sport carries the same degree of obsession in Britain as football does,” shares McAlpine. If you were British, you'd have gotten into it as a small child, so you’ll have to catch up now — that is, if the World Cup didn’t already inspire you. Follow a team, wear the merchandise, and never miss an opportunity to cheer them on. When in doubt, root for the underdog. Like McAlpine says, “Winning is boring.”

Keep Up With the Royal Family

The royal family isn’t universally popular but they’re an essential part of British culture, so make sure you stay in the know. They can be found splashed across the many British tabloids, with which Brits have a love-hate relationship. Let’s face it, though: the royal wedding and subsequent royal babies probably sucked you in — and that’s just if Kate Middleton’s hair and fascinators hadn’t already.

Don't Be Afraid to Swear — Frequently

“The sad truth of the matter is that the British excel at swearing. And they’re proud of it too,” admits McApline, who divides swearwords into grade-A and grade-B, depending on how offensive they are. British slang definitely beats American English when it comes to grade-B options. Brits have tons of options when it comes to words that aren’t fit for polite company, yet still aren't totally obscene. Why should they have all the fun? Try out words like "bugger," "wanker," and "bollocks." I’ll use them in a sentence for you: “Oh, bollocks, just bugger off, you wanker!” Fun, right?

American chocolate has different ratios of cocoa solids to sugar, and Brits are not fond of our version. As much as I love all chocolate, I see their point. If you’ve had British chocolate, you have to concede its superiority. Never admit to liking Hershey’s; Galaxy and Cadbury are where it’s at.

Get Creative With a Deep-Fryer

Anything can be deep-fried. Seriously, anything. Pizza? An egg wrapped in sausage meat and breaded? Banana fritters? It’s not only possible, it’s been done. While you’ll probably mostly want to stick to the usual suspects, like fish and chips, feel free to get creative. Scots are especially well-known for their innovative deep-fried creations, and we wouldn't want to forget England’s neighbor to the north.