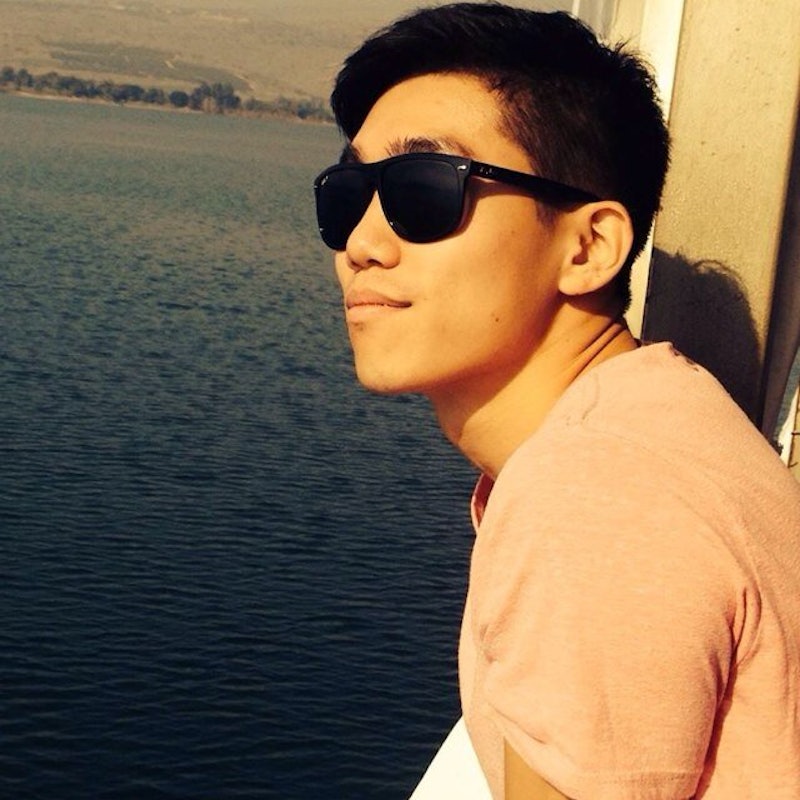 After the #CancelColbert hashtag started trending in response to a "satirically" racist tweet that was presented out of context on The Colbert Report's official twitter account, the feminist activist who started the tag, Suey Park, started receiving a barrage of online harassment. It's well established that women who are vocal online are frequent targets of threats and verbal abuse, and women of color are often even more vulnerable to such attacks. But last night, Suey Park took an innovative approach to pointing out this double standard: she turned her Twitter persona into a dude.

The newly christened "Stewy Park," a self-proclaimed "dudebro feminist," wasted no time in professing a love of protein shakes and weight lifting, while also engaging in the backhanded patriarchal comments that feminists often hear from male "allies." And as a commentary on how women are often treated on the Internet, it was fairly brilliant.

It also raises the question of how the backlash to #CancelColbert might have been different if it had been started by a man. In the reaction to #CancelColbert – which largely focused on the fact that the offending tweet did have a context, ignoring the fact that it was presented out of context – Suey Park was often treated dismissively, such as when Josh Zepps actually called her opinion "stupid" to her face during a HuffPostLive interview.

Would things be different if Suey Park were a man? We'll probably never know for sure, but "Stewy Park" gives us an idea.

And before long other feminists of color were getting in on the fun by changing their own avatars. First Black Girl Dangerous became Black Guy Dangerous:

And then the floodgates opened.

And @thewayoftheid, who runs Hood Feminism along with Mikki Kendall and who had changed her avatar to a white man and renamed herself Fed Up Hipster several weeks ago as a joke, lived up to her new persona by pointing out she was way ahead of the curve on this one.

And as the jokes just kept coming, it became clear everyone was having a lot of fun with it.

And their followers enjoyed it, too.

It also, tellingly, reduced the amount of harassment the women recieved, at least by their own estimation.

But as telling as this is, it's probably even more noteworthy that after hearing for days that they "just don't understand satire," these women managed to produce some fairly on-point satire of their own. Not only did it highlight problems that often accompany male allies, it also drew attention to gendered double standards in activism and was actually enjoyable to their Twitter audience. Again, this from women who "don't get satire."

The ways in which comedians use race will likely be a an ongoing discussion for years to come. Can racism be presented "ironically," especially by a white comedian? Does "ironic" racism still leave people of color as a punchline even if it proves a point? And when comedians make racial missteps, under what circumstances should they be forgiven? These and other questions aren't going to be settled any time soon, but what is clear is the fact that we won't get anywhere by pretending the people who call out racially charged comedy are only doing so because they don't understand satire. In fact, they might understand it better than any of us.