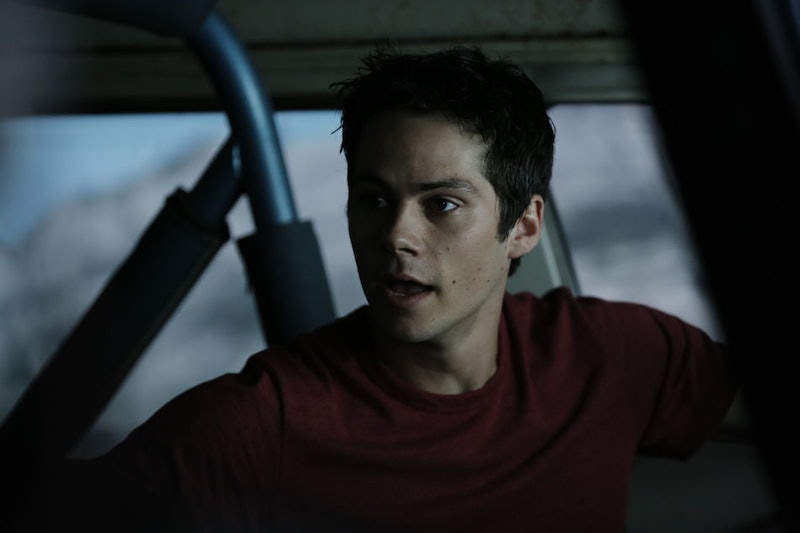 Stiles is gone. After five years fighting supernatural crime in Beacon Hills with Scott and their friends on Teen Wolf, it's almost as if Stiles never existed. Thus begins Season 6 of Teen Wolf ! In the season premiere, "Memory Lost," Stiles was taken by this season's new big bad: the Ghost Riders. But, before he was erased from existence, Stiles was having trouble kicking off the end of senior year with Malia, Scott, and Lydia. After three months of peace, Stiles was craving supernatural action, and, boy, did he get it. Stiles was erased on Teen Wolf , and Lydia could be his only hope of making it back alive.

The episode started with the group settling into their more normal human lives — Stiles more reluctantly than others — when suddenly a little boy was found. His parents had been taken from a moving car, and only he survived. While investigating with Scott, Stiles saw a scary dark figure, dressed as a cowboy with a powerful, and apparently magical, gun. It shot at him, but disappeared before anything else could happen. When Scott and the others arrived at the scene, there was no evidence of the shots. But, even weirder, the boy's bedroom had disappeared. That's when Stiles figured it out: the boy's parents had been erased from existence.

After the little boy disappeared too, Stiles and Scott assumed that the next to go would be the only two other people out on the road the night the parents disappeared: Liam and Hayden, but they were wrong. By the time they got to the high school to look for them, people had forgotten who Stiles was. The only person who remembered was Lydia. With her Banshee powers, Lydia realized that the missing people were part of the Wild Hunt myth: Ghost Riders collecting the souls of those who see them.

Lydia and Stiles tried to run from the Ghost Riders, but they were too quick. Reassured that Lydia couldn't see them, and that she hadn't forgotten him yet, Stiles asked her to remember him, and remember that he loved her, before letting himself be taken. The next morning, Lydia arrived at school puzzled. She had a feeling, she said, that she was supposed to do something, but she can't remember what it is.

Lydia seems to be the only one bothered by Stiles' absence — even Scott and Stiles' dad have forgotten him. If Stiles is going to make it back, he's going to need Lydia more than ever.

More like this
Michael & Kathleen Peterson’s House From ‘The Staircase’ Has New Owners
By Kadin Burnett and Kayla Blanton
TikTok's Spooky 'Heartstopper' Fan Theory Will Make You Question Everything
By Nola Ojomu
Everything To Know About A Million Little Things' Reported Final Season
By Brad Witter
'Who Killed Sara?' Won’t Return For Season 4
By Brad Witter
Get Even More From Bustle — Sign Up For The Newsletter