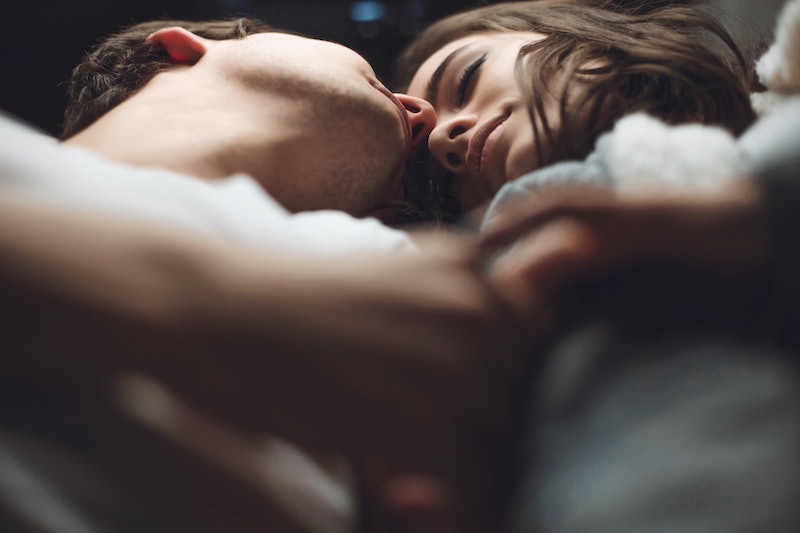 Birth control is fantastic. It doesn’t just prevent unplanned pregnancies, contributing to the 18 percent decline in them from 2008 to 2011, but it gives people, women especially, control over their bodies. By using birth control, you’re deciding what’s right for you in regards to being a parent now, later, or never.

Today, The National Campaign to Prevent Teen and Unplanned Pregnancy wants to get the word out about just how important birth control is to both men and women. The Thanks, Birth Control 2016 campaign asks participants across the country to say why they’re thankful for birth control, by tagging their thoughts and selfies with #ThxBirthControl. With the impending Trump presidency, we may see major changes to the accessibility of birth control, as women’s reproductive rights hang in the balance. So perhaps it's more important to thank your birth control now more than ever.

Although birth control is used to prevent unplanned pregnancy, that’s not the only reason to love it. Birth control offers health benefits that may have never crossed your mind, as well as the freedom to choose your future, and so much more. So as you prepare to thank your birth control today, here are seven reasons to love it — in case you’ve forgotten.

1. It Improves The Health Of Mothers And Babies

When women are given the power to decide what’s right for their body, everyone wins. What this means is that in having that power, when a woman is ready to have a baby, her baby is more likely to be healthier, because it’s coming into a healthier situation, a situation in which it was planned. According to The National Campaign to Prevent Teen and Unplanned pregnancy, 81 percent of Americans believe this.

Babies who are the result of an unintended pregnancy have a greater risk of low birth weight, as well as premature birth.

Women who have access to birth control are more likely to finish school, and have improved employment and financial opportunities because of it. This isn’t just beneficial for women, but men, babies, grandmas, grandpas, and society as a whole. Of those surveyed, 84 percent believe that birth control directly contributes to opportunities, financial, educational, and employment-based, for women.

Almost half of all births in the U.S. are paid for by Medicaid. However, when women are given access to affordable birth control options, it reduces Medicaid costs because women are more likely to have a baby when they’re financially ready. According to the stats by The National Campaign to Prevent Teen and Unplanned Pregnancy, it only costs $239 a year to supply contraception to one person, but if that person doesn’t have birth control and ends up getting pregnant, that birth costs $12,770.

Well, of course! Although not all of the 2.8 million unplanned pregnancies a year result in abortion, there’s still 42 percent that do. So basic math is if you want to limit abortions, then you need to provide birth control. In fact, 76 percent of all adults believe if you’re against abortion, then you should be pro-birth control — for all obvious reasons. When that’s broken up into political parties, 84 percent of Democrats and 72 percent of Republicans believe that birth control is one of the major ways to prevent abortions.

5. It Saves Private Dollars, Too

In addition to cutting Medicaid costs, birth control also helps companies save money. Because of this, The National Business Group on Health suggests that if employers want to spend less, they should provide insurance that covers birth control. It’s actually less than one percent of the total monthly insurance amount per employee to offer birth control coverage.

6. There Are So Many Options

We’re fortunate enough to live in a time where we have other birth control options besides the Pill. Although this is the case, The National Campaign to Prevent Teen and Unplanned Pregnancy has found that not enough people know about their options. Of those surveyed, 38 percent of adults said they know “little to nothing” about the Pill, while 68 percent and 77 percent said the same about IUDs and implants, respectively. So here's a tip: You have many options! Talk to your doctor and see what's right for you.

7. There Are Several Health Benefits To Using Birth Control

Although The National Campaign to Prevent Teen and Unplanned Pregnancy didn’t get into the health benefits of hormonal birth control, there are many. Studies have found that oral contraceptives can reduce risk of ovarian cancer and anaemia. It can also help with acne, lightening periods and cramps, is used to treat uterine fibroids, endometriosis, and women who use IUDs reduce their chances of cervical cancer by 54 percent. I'd say those are some major reasons to love birth control right there.

Why do you love your birth control? Shout it out and tag it #ThxBirthControl on Wednesday, November 16!

More like this
Are Gemini & Scorpio Compatible In A Relationship?
By Kristine Fellizar
15 Flirty "Thinking Of You" Texts That’ll Make Your Crush’s Day
By Lexi Inks
The “Rules For Dating” TikTok Trend, Explained
By Lexi Inks
6 Abortion Advocates To Follow On TikTok
By Sara Youngblood Gregory
Get Even More From Bustle — Sign Up For The Newsletter