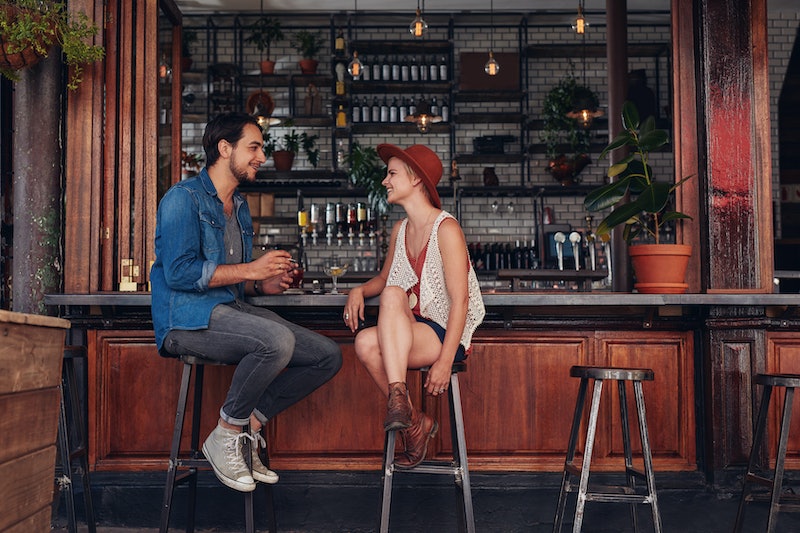 The 2016 presidential election was likely the most divisive election in many Millennials' memories, but even now that it's over, the country is still divided. The election just seemed to reveal all of these differences and tensions, bring them to the surface, and then leave us with the chaos. It's been the source of arguments with friends and family, not to mention the havoc it's wreaked on relationships.

But what if you're not in a relationship? What if you're going on first date in the aftermath of the election? Or are at the early stages and still trying to figure out the other person. I think it's so important to touch base on politics early on in a relationship. And it's not just a matter of opinion. According to the massive Match Singles In America survey, not only are 80 percent of people happy to talk politics on the first date, it actually increases the likelihood of a second date by 91 percent. (Oh, and people who are passionate about politics were 100 percent more likely to have a threesome, just saying.) So you really should start talking about it.

Plus, this election was so polarizing that you're going to get a good sense of your compatibility by touching base on it. "Part of me wants to say that it doesn’t matter what party people are affiliated, they can still be compatible and still find meaningful connections with people who vote differently from you," relationship therapist Aimee Hartstein, LCSW tells Bustle. "And perhaps that was true at a different time, during a different election. But right now I would imagine that a Trump supporter and a [Clinton] supporter are not likely to get past a first date with each other. I think at this point in time, our politics are so divisive that I don’t see either person being easily able to hear out the other’s POV and give them a chance!"

1. Be Prepared For A Bumpy Ride

Maybe you'll agree and everything will be fine. But you have to preparte yourself for the fact that other people are different than you and you may have some strong disagreement. "Perhaps if two people are starting to get to know each other, like each other, are attracted to each other, they will be able to be generous and open enough to learn a little bit about where the other is coming from," Hartstein tells Bustle. "But my advice is to wait a date or two [before bringing up politics]!"

I honestly don't think you have to wait a date or two — I'd rather know upfront. But whichever way you want to play it, just know that it might get heated.

2. Try To Keep An Open Mind

It was a traumatic election for some people, and a lot of people, even those who voted in the same party, may have strong feelings. For example, Bernie or Bust-ers aren't the same as die-hard Clinton fans, so it's easy for the conversation to get really tricky, real quick.

"Second and third date, yeah, go ahead and use the throwaway approach to bring up politics," relationship coach and founder of Maze of Love, Chris Armstrong, tells Bustle. "The throwaway approach is where you put a potential topic on the table but you do so in a manner that allows the other person to take it or leave it. If they do not take it and you have a very specific political lens, be a little more direct. Eventually, it will need to come out and there is no reason to avoid it, only to find yourself resuscitating things down the line."

So although you might never meet in the the middle if one of you voted for Trump and the other didn't— and that's totally OK — you might have some more nuanced disagreements that you can get over. As much as it's easy to feel impassioned and defensive right now, remember you don't need to agree on every small issue. So try to take a breath.

Ultimately, politics can be a very charged, very personal thing to some people. So, ultimately, if there's a political disagreement you can't get over, that's fair enough. It's more important that you are honest with yourself and show some integrity than caving on your convictions to placate a date.

The election and it's aftermath has been tough on a lot of us. But to me, that means it's so important to clear the air right away and make sure you're the same page. Know your political deal-breakers, if you have any, try to stay calm, but don't apologize for what you believe.