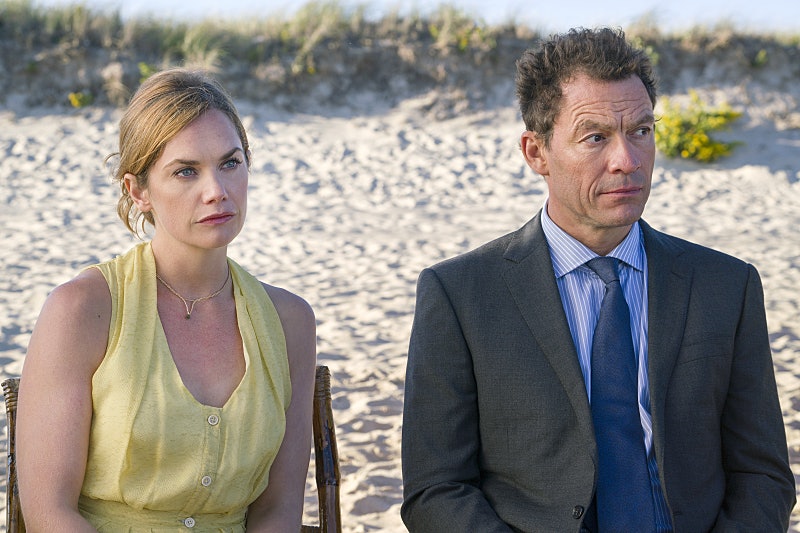 It's been almost a year since Noah Solloway dramatically declared in open court that he'd killed Scotty Lockhart — and then the screen faded to black as we asked ourselves, "what the heck happens now?" When The Affair Season 3 premieres on Showtime on Nov. 20, we'll finally get some answers about what exactly occurred after that cliffhanger. Although this series is nothing if not mysterious, we do know that Season 3 will pick up three years later as Noah is released from prison and attempts to rebuild his life. But, thanks to the show's brilliant alternating perspectives, we'll consistently be kept guessing and wondering who to trust. Before we head back to Montauk, let's recap The Affair Season 2 so we're prepared to jump into the drama and mystery of the new season.

Season 2 changed up its format by adding the perspectives of Helen and Cole, the two jilted spouses — and Season 3 has promised to add a fifth perspective. Contrary to what many of us assumed, the new perspective won't be Whitney Solloway's — Vanity Fair reports it's a brand new character played by French actress Irène Jacob, who will be Noah's latest love interest. What about Allison, you ask? Trailers and teasers indicate that she and Noah may be dunzo and I'd venture a guess it's related to Joanie's paternity. So, in a twist that will surely shock no one, it doesn't seem that Allison and Noah are destined to live happily ever after — and the events of Season 2 certainly indicated they were headed for a breakup. So, let's take a walk down memory lane of betrayals, blackmail, and the gruesome hit-and-run that changed everything.

Allison & Noah's Engagement Is Doomed From The Start

When the season kicks off, Noah and Allison are living together in a riverside cabin outside the city while he finishes his book. He impulsively proposes to her and she accepts, but Allison definitely appears less than ecstatic about their upcoming nuptials. Noah goes AWOL when he learns his kids are in crisis, so Allison heads back to Montauk. Poor Cole has just met and become smitten with Luisa, but he's still hopelessly in love with Allison and jumps into bed with her the moment she shows up. Their one night stand has some serious ramifications — more on that later.

Helen Has One Rough Season

In present day, Helen inexplicably foots the hefty bill for Noah's defense attorney. But, thanks to flashbacks and the addition of her character's perspective, we witness her heartbreaking crisis after being abandoned by her husband. Helen's overbearing mom has moved in with the family and she has a tryst with Max (Noah's former best friend) which leaves her more miserable than ever. To top it off, Helen ovehears judgmental mothers gossipping about her marriage when she picks her daughter up from dance class. She starts drinking and smoking a bit too much marijuana, and eventually gets a DUI — with her kids in the car, even yet.

When Allison tells Noah she's pregnant, she fails to mention that he may or may not be the father. Cole inexplicably doesn't connect the dots that Joanie could be his child — but Scotty does, and he makes sure Allison knows it. In present day, the plot thickens when Oscar turns over security footage of Scotty (R.I.P.) fighting with Allison on the night of his death. He repeatedly tells her, "that's our baby," leaving us to wonder if Allison and Scotty also had a fling — but don't worry, folks, it's a major red herring. By "our baby," he simply meant Joanie is a Lockhart. Still, I totally bought it and spent several episodes thinking Scotty was Joanie's father — well played, The Affair.

Cole & Allison Go Into Business Together

Allison drops out of nursing school and fails to mention it to Noah — meanwhile, she's found a different calling. As Noah's fame rises in New York City, she's drawn back to Montauk. She and Cole buy The Lobster Roll, and Noah's less than supportive. Cole has finally found happiness with Luisa and the two become engaged, so it looks like at least one couple will get their happily ever after. Scotty resurfaces and repeatedly threatens Allison with his knowledge that Cole is Joanie's biological father. Much to Allison's relief, Cole sends his brother to rehab and she thinks she's in the clear. (Spoiler alert — she's not.)

Scotty gets out of rehab just in time to crash Cole and Luisa's wedding. He apologizes to Allison for all those times he blackmailed and threatened her, but their peace is short-lived when Cole tells him that he can't be part of the Lobster Roll. When Allison doesn't stand up for him, he vows to tell everyone that Joanie is Cole's baby. Allison beats him to the punch by telling Noah the truth, and Noah storms off for a night of heavy drinking with Helen. Scotty and Allison also bail on the wedding and separately head off to walk the dark roads alone, as one does in the midst of a miserable wedding.

Helen and Noah unwisely get in his car and drive off — and, in a twist that few saw coming, we learn that Helen was the one driving the car that struck and killed Scotty. But wait, there's more! In a coincidence that would only happen on TV, it turns out that Allison and Scotty had run into each other and gotten into an altercation on the side of the road. When he tried to force himself on her, Allison pushed him into the street right as Helen and Noah's car turned the corner. All three of them fled the scene, but Helen never got out of the car and has no idea that Allison was even there.

We finally reach that courtroom scene we've spent two seasons anticipating. Noah's defense attorney has a bad feeling that he's going to be convicted, so he suggests presenting newfound evidence that Allison was at the crime scene — her wedding placecard that fell out of her pocket during her struggle with Scotty. Allison tells Noah to turn on Helen and "just tell the truth" (presumably omitting the part where she shoved Scotty into the street), but he refuses and she orders him to choose between them. For a brief moment, it looks like Noah has chosen Helen over Allison and Detective Jeffries is called to the witness stand. Before Jeffries has a chance to testify, Noah blurts out that he's guilty of Scotty Lockhart's murder.

It's safe to assume that many things will have changed after the time jump — but I'll venture a guess that Season 3 will be full of the secrets, lies, mysteries, and twists that make The Affair so gripping.