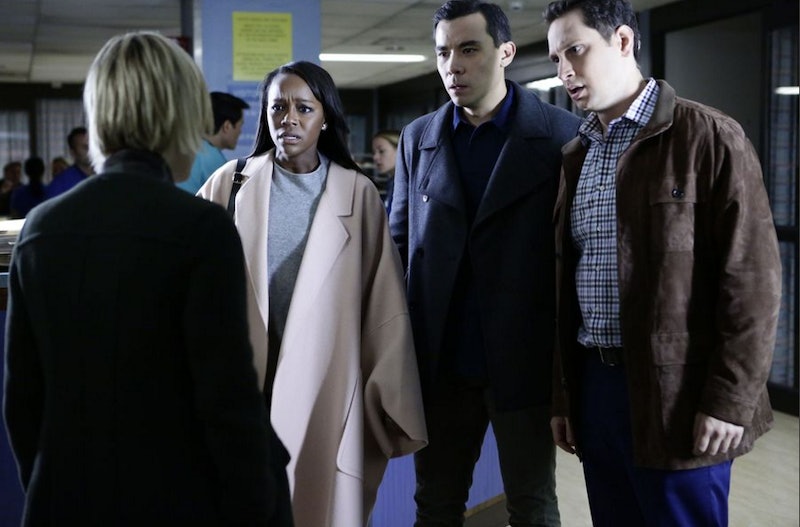 Season 2 of ABC's soap opera murder mystery left me cold, but thus far, How To Get Away With Murder Season 3 has been absolute fire. I think it's because the case of the year is one that's of personal import to the Keating Five. (Or is it Six? Oliver counts.) I never really cared about last year's creepy brother and sister defendants; there's more resonance to a trial that directly involves Wes and his family. And the "Who's under the sheet?" countdown is stressing me out in all the right ways. Viewers will find out whose body was found in Annaliese's charred house on the How To Get Away With Murder fall finale Thursday night. And then, because TV is cruel, they'll be plunged into a hiatus. After a cliffhanger, naturally. So when will How To Get Away With Murder return?

As of right now, ABC has not announced all of its spring premiere dates, including the return of How To Get Away With Murder . The Season 1 hiatus lasted from Nov. 20, 2014 to Jan. 29, 2015. And this year, the spring premiere aired on Feb. 11, 2016 following a Nov. 19, 2015 fall finale. Using those schedules as a reference, I'm predicting that How To Get Away With Murder won't be back any sooner than late January.

That's a long time to wait and I know this show won't answer all my questions before leaving me for months. But here are a few queries I'm dying to see addressed before the hiatus starts.

Did Frank Go Through With It?

There were content warnings all over that pentultimate episode. And the reason for them was this scene, where Frank held a loaded gun to his head and offered to "make things right" for Annaliese by killing himself. Annaliese screamed at him to do it while Bonnie tried to talk him down. And of course, the episode ended before he could give in to either one of them. It very well could be Frank's body under that sheet, though this feels like a classic Red Herring.

One of the seasons's biggest bombshells so far is that Laurel is pregnant. Initially, it seemed as if she and Frank might have reunited at some point. But as the season progressed and Laurel and Wes gave into their more-than-friendly feelings, the script was flipped. Laurel is probably carrying Wes's child, though the show hasn't confirmed it.

Connor, Connor, Connor. What did you do? Hurt by Oliver's rejection, Connor ended up in bed with Thomas, a guy Oliver had been seeing. I'm very invested in the happiness of these two and would prefer that happiness to be shared. But that was a petty thing that Connor did. Will Oliver ever be able to forgive him?

What's Going On With Michaela's Family?

Michaela has been blowing off her mother's calls all season and telling Asher and her classmates that she's walked away from her family for good. But too much time has been spent on this storyline for it to be domestic and insignificant. Something is up and I want to know what.

Anyway, look on the bright side: at least a lengthy How To Get Away With Murder hiatus will give you plenty of time to mourn over whoever is under that sheet.

More like this
The True Story Of Candy Montgomery From Hulu’s True Crime Series
By Radhika Menon
Netflix Just Revealed When 'Never Have I Ever' Seasons 3 Will Premiere
By Gretchen Smail and Alyssa Lapid
'Unforgotten's Brand New Character Joins At A Pivotal Moment For S5
By Bustle UK
Will The Pentaverate Get A Season 2?
By Kadin Burnett
Get Even More From Bustle — Sign Up For The Newsletter