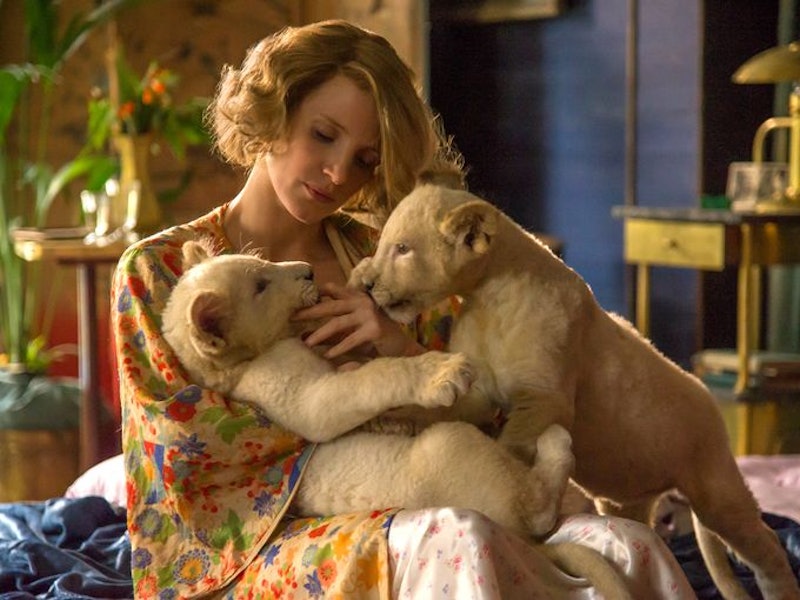 A woman, played by Jessica Chastain, goes about her business of opening up her zoo for the day. Soon, bombs are falling everywhere; a title card informs us we're in 1939 Poland — and what seemed like a lush period romance turns out to be a harrowing World War II drama. The new The Zookeeper's Wife trailer paints the upcoming Chastain film as a based-on-a-true-story account of a woman who hid Jews during the Holocaust, combined with a dash of animal allegory — a sort of Schindler's List-meets-Life Of Pi hybrid. But what makes The Zookeeper's Wife look so interesting isn't the unique combination of tones, but the ways in which the story manages to feel unexpectedly timely.

It's been just over a week since Donald Trump became our president-elect, and already tensions among the country's minority populations are high, due to fears over the new administration's agenda, including anti-LGBT legislation and a potential national registry for Muslims. In the Zookeeper's Wife trailer, we watch as first the Jewish business are vandalized (just as the homes and businesses of minorities across America have been vandalized over the past week), then as they are forced to wear identifying armbands (like a potential Muslim registry might require), and then ultimately loaded onto trains and shipped off to concentration camps (echoing the Japanese internment camps that a prominent Trump supporter recently used as precedent in arguing the legality of a Muslim registry).

The events of The Zookeeper's Wife may have happened 77 years ago, but thanks to current events, the trailer doesn't so much feel like a retelling of the past, but a warning for the future. Of course, the studio couldn't have known the outcome of the 2016 election when making this movie, but the timing is undeniably conducive to drawing parallels. (Just like Fantastic Beasts and Where to Find Them and its fascist villains, debuting less than two weeks after Trump's victory.) We'll see what kind of effect that timing has on the film's success; it may help — or it may hurt, if people decide real life is already scary enough for them.

Either way, the story of The Zookeeper's Wife is definitely one worth telling. Two-time Oscar nominee Chastain plays Antonina Żabińska, whose husband, Jan, ran the Warsaw Zoo at the time of the German invasion of Poland. Together, Antonina and Jan were able to save the lives of many humans and animals both by hiding them from Nazis inside cages in their zoo. Together, the couple is credited with saving approximately 300 lives.

The Zookeeper's Wife premieres on March 31, 2017. In the meantime, you can catch Chastain in another equally timely film: the gun lobby drama Miss Sloane , which opens on Nov. 25, 2016.