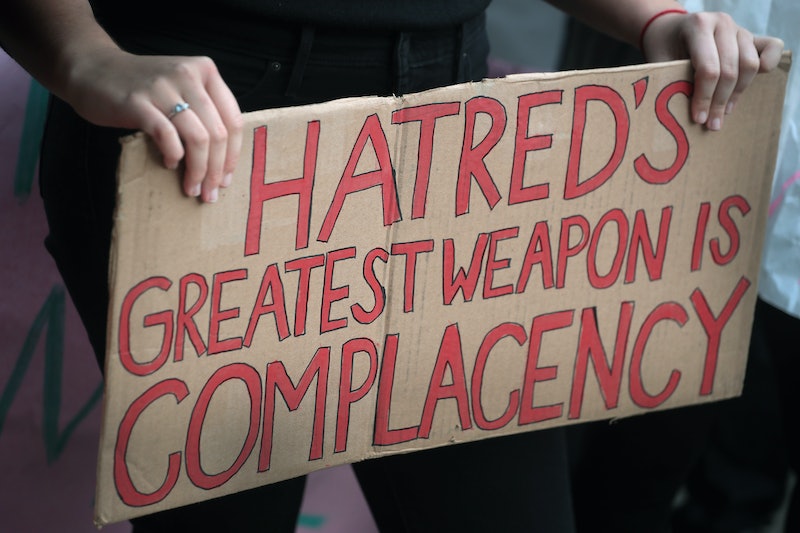 Despite ongoing protests nationwide that proclaim "Love Trumps Hate," the harsh reality feels more like Donald Trump (And His Supporters) Love Hate. Since Nov. 8, when around a quarter of Americans voted for a former reality TV star who actively courted white supremacists to occupy the highest office in the land, hate attacks have reportedly spiked dramatically. The Southern Poverty Law Center (SPLC), a progressive legal nonprofit that tracks hate-based activity around the country, reported that in the five days after the election, there were more than 430 "reports of hateful intimidation and harassment." It's a shocking number which has rightly prompted renewed calls not only for peace and tolerance, but also for financial support of organizations that defend the marginalized. Read on to find out how you can help.

The incidents SPLC has been tracking likely mimic what many liberals may already be seeing on their social media timelines — reports of racist, anti-Muslim, anti-Semitic, and anti-LGBT vandalism and assaults spreading across the country. Even in proudly progressive cities in states that went blue, incidents are being reported. In the diverse and urban Capitol Hill neighborhood of my hometown in Denver, Colorado, a transgender woman reportedly awoke this morning to find her car defaced with hate speech, a swastika, and pro-Trump graffiti. So much for being a city full of peace-loving stoners.

For everyone who is saddened, frightened, and disappointed by these unabashed displays of bigotry, there are several organizations you can support that help care for victims of these attacks and fight for justice. If you're able, set up a recurring monthly donation (even a small one) to any of the groups below to help make sure they can continue to stand up to hate in what is almost certain to become an increasingly hostile federal environment. If you're not in a position to donate financially to any of these groups, consider donating your time, expertise, or just your voice to raising awareness about these resources.

This legal nonprofit based in Montgomery, Alabama is arguably best known for keeping tabs on numerous homegrown extremist groups around the country. SPLC's "Hatewatch" is a great place to start if you're wondering why so many people are panicked about Trump administration picks.

The group is also a legal powerhouse, and has taken on landmark cases regarding immigration, LGBT rights, women's rights, criminal justice reform, children's rights, and economic justice. If any of those issues impact you or someone you love, there are several ways you can support SPLC's work.

This organization has chapters in every state, and has a Spanish-language outfit called MiACLU, which defends "derechos para todos" (rights for all). Within hours of Trump's victory, the ACLU promised that if the president-elect tried to implement any of his numerous unconstitutional campaign promises, the ACLU would sue President Trump. As a result of that pledge and the outpouring of support it triggered (to the tune of $7.3 million), executive director Anthony D. Romero announced on Nov. 15 that President Trump will face "the strongest ACLU in the 100-year history of our organization."

Even so, the venerable organization is likely to face a daunting four years, and any support you're able to provide will absolutely be needed. Romero has already started planning how the ACLU will use the donations to fight for equality.

Even before Trump's victory in the general election, federal officials and leaders at the Council on American-Islamic Relations (CAIR) were reporting an unprecedented increase in anti-Muslim attacks in the U.S. Since Nov. 8, CAIR's Facebook page has been filled with reports of Islamophobic harassment, assault, and vandalism throughout the country. As Trump continues to announce his transition team and possible cabinet appointments, CAIR is sounding the alarm about those candidates who have a long histories of anti-Muslim rhetoric and Islamophobic fear-mongering. The national chapter of CAIR seems most concerned about the appointment of White House senior adviser and white nationalist Steve Bannon, as well as anti-Islam conspiracy theorist Frank Gaffney, who's reportedly advising Trump's transition team.

The grassroots civil rights and advocacy group is organizing local demonstrations, ally training, and letter-writing and phone banking campaigns in an effort to keep Islamophobes out of the Oval Office. You can stand beside your fellow citizens who believe Muslims help make America great by donating to CAIR.

The National Council of La Raza (NCLR) bills itself as "the largest national Hispanic civil rights and advocacy organization in the U.S.," noting that its mission is to strengthen the American institution by supporting the advancement of Latino families. The nonprofit, nonpartisan organization based in Washington, D.C. provides critical research, advocacy, and connections to direct support services for those within the broader Latino community.

Considering that Americans just elected a president whose campaign largely hinged on promises to "build a wall" between the U.S. and Mexico, and who routinely slandered Mexican, South American, and all Spanish-speaking immigrants, and promised to create a "deportation force" to remove an estimated 11 million people, you can bet NCLR and the organizations it supports are going to need all the help they can get. You can set up recurring donations here, or find other ways to contribute to the fight against racism and xenophobia here.

The founders of the pivotal, decentralized movement released a statement on Nov. 15 announcing that Black Lives Matter's "mandate has not changed" in the face of President-Elect Donald Trump. The three women who created #BlackLivesMatter — Patrisse Cullors, Opal Tometi, and Alicia Garza — said in that statement that they felt "betrayed," but not surprised, by Trump's victory. "What is true today — and has been true since the seizure of this land — is that when black people and women build power, white people become resentful," read the statement from BLM leaders obtained by Mic.com. "Last week, that resentment manifested itself in the election of a white supremacist to the highest office in American government."

There is no better moment for all equality-minded Americans (and especially white Americans, who overwhelmingly voted for Trump) to stand up and proclaim that Black Lives Matter. Donate to the Movement for Black Lives here, find your local BLM chapter, and show up, sit down, listen, and follow the lead of the people who have always pushed this country closer to greatness.

In what might be the greatest news for women to come out of this disastrous election, Planned Parenthood not only reports that it's seen a massive increase in donations and volunteers, but the women's health group has also received 20,000 donations in Mike Pence's name since the former Indiana governor was named vice president-elect.

Aside from Trump's 60 Minutes interview, in which he suggested that he'd like to overturn Roe v. Wade (putting the future of access to safe, legal abortion in America in serious jeopardy), Pence has a long history of targeting Planned Parenthood because it provides abortions — along with a host of other preventative and much-needed medical care. With Pence heading the Trump transition team, and as the highest-ranking person on the ticket with any legislative experience, it's a safe bet that women's healthcare will be under siege for the next four years, so it's time to show you stand with Planned Parenthood.

“This is a really dark time for women and families and our members,” NARAL's national communications director Kaylie Hanson Long told Politico on Nov. 15. The policies being floated by the Trump-Pence administration are “a real danger to women, our bodies, for our freedom, our economic stability, the economic stability of families, and we’re definitely going to be facing some hard times ahead as an organization, but times like these are exactly why NARAL exists in the first place.”

Like Planned Parenthood, NARAL Pro-Choice America works to defend reproductive rights, and is currently running a social media campaign called #ThxBirthControl, where people who have benefited from obtaining affordable birth control share how it improved their lives. NARAL works closely with Planned Parenthood's nonprofit and advocacy arms, helping to make sure health care providers can keep doing their jobs. Hold the line against attacks on reproductive freedom by setting up a recurring donation.

More like this
How To Fight For Reproductive Rights, Based On How Much Time You Have
By Courtney Young
10 Times Boris Johnson Got It Wrong On Trans Rights
By El Hunt and Sam Ramsden
Michigan’s Governor Is “Going To Fight Like Hell” To Protect Abortion Access
By Andrea Zelinski
Target Dropped *Two* New Fashion Collabs With Queer-Owned Brands
By Dominique Norman
Get Even More From Bustle — Sign Up For The Newsletter