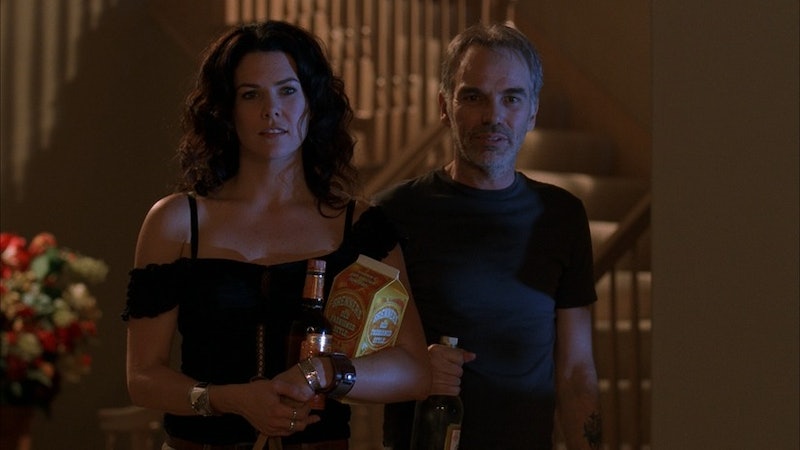 In Bad Santa 2, Willie Sokes is up to his old ways again: drinking, contemplating violence, and trying to have sex with as many women as possible. This might come as somewhat of a surprise to fans, since at the end of Bad Santa, the character seemed reformed, ready to live a more tame life with his girlfriend, Sue, who was played by Lauren Graham. But sadly, the Gilmore Girls star is nowhere to be found in the sequel. Yet why Lauren Graham isn't in Bad Santa 2 actually makes sense, both for her character and the movie as a whole.

“We love Lauren and tried desperately to figure out a way to bring her back, but the harsh reality is there’s no movie if Willie is happy and sober which would be the case had he managed to stay with Sue," Miramax said in a statement to Bustle. "We needed Willie to be back at rock bottom to give the audience the Bad Santa they know and love and with that we like to imagine Sue has moved on to a healthier, happier, committed, STD-free relationship. Our only regret is we didn’t get to spend time with the wonderful, talented Lauren."

Judging by what fans saw of Willie in the first movie, it does seem unlikely that the character would have stayed with the same woman for the entire 13-year period since then. Odds are that he and Sue would have split up long ago, setting the stage for him to be a deplorable mess once again. And let's face it, that's the reason why people watch a Bad Santa movie — no one wants to see him in a happy and healthy relationship.

And even if featuring Sue in Bad Santa 2 had make sense, Graham's schedule like would've prevented it from happening. Bad Santa began filming halfway through January of this year, but at that time Graham was preparing to shoot the Gilmore Girls revival for Netflix, which started filming on Feb. 2 and continued through June. Given the overlap between the two projects, it seems highly unlikely that Graham would have been able to do both.

The actor's absence from the film doesn't mean that Willie is without romance, however. Filling the role of Willie's new love interest in Bad Santa 2 is Mad Men's Christina Hendricks. The new movie takes place in Chicago, and Hendricks plays Diane, a wealthy, Ivy League graduate who runs a charity that becomes the target of Willie and his accomplice Marcus, with whom he has recently reunited. And oh yeah, just like Sue in the first film, Diane has a Santa fetish.

Fans will definitely miss Graham in Bad Santa 2, but the new addition of Hendricks should help to fill the void left by her absence.