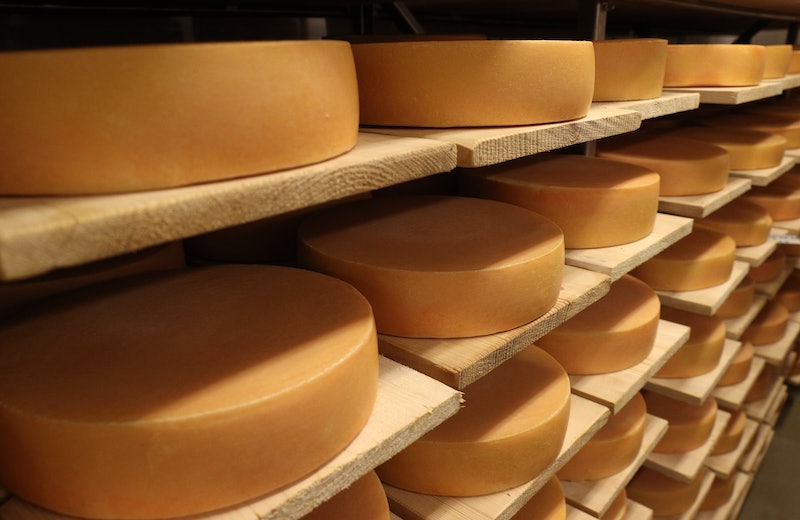 If there is anything most of us can agree on, it's a good cheese. Seriously: Cheese has the power to unite us as a people — even if it's dairy-free or vegan. And right now, the internet is absolutely losing it over chocolate cheese, which is exactly what it sounds like: Cheese shot through and covered with chocolate. A little startling? Perhaps, but people are already jumping on board in a big way. This isn't just dipping a hunk of cheese in some melted chocolate, or sticking a chocolate bar in some fondue; no, this is literally chocolate cheese, and it comes to us by way of Australia.

Appropriately dubbed "Choco 21," this chocolatey, cheesy creation originates with a dairy store in Melbourne by the name of Curds & Whey. If you, like me, are in entirely the wrong country to get a hold of a piece, don't worry; there are enough details floating around for us to imagine the taste.

Choco 21 is made of Italian blue cheese (aka, the smelliest of cheeses), and is aged in chocolate liqueur. Then, dairy specialists cover it with cocoa and other chunks of chocolate. It looks like this:

But I have some unfortunate news, too, even if you happen to be in the Melbourne area: According to Curds & Whey's social media accounts, including Facebook and Instagram, it appears that they've already sold out of this innovative treat. However, in their Instagram post announcing the sellout, they ensure curious shoppers that they should have more chocolate cheese in stock in the next few weeks... which gives the rest of us enough time to buy a flight to Australia. If, you know, you're really craving some sweet and tangy cheese. Curds & Whey regularly appear at Queen Victoria Market, so head on over there to snag some the next time it's in stock.

Although some might raise an eyebrow at the idea of chocolate cheese, personally, I'm not too surprised about it. I mean, people love cheese, so of course we're going to get creative with it, right? After all, we live in a world where we celebrated rainbow grilled cheese sandwiches. Heck, there is even a power plant in France that runs off of cheese. I know, I know: I can't make this stuff up.

Admittedly, there is a difference between altering the appearance of cheese and altering the actual taste of the food, but still: Innovation is usually a good thing, even if you personally don't end up enjoying the new version. When people experiment with food, we learn more about what works and what doesn't — so even if you're totally grossed out at the thought of chocolate cheese, just remember: Food crazes like these are basically a tunnel to us discovering more new ways of preparing and serving food, one of which you'll probably love. Eventually.

And for all of us who are actually really excited at the idea of chocolate cheese, let's just keep our eye on those flights to Australia.