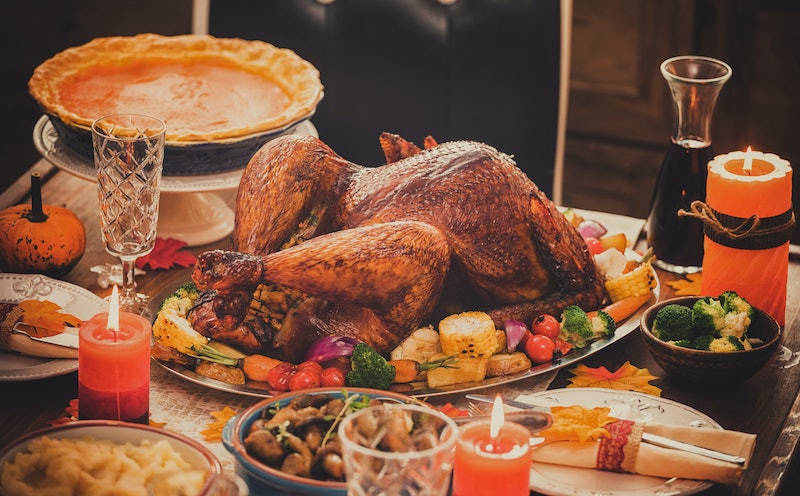 Cultures may change, but human nature is fairly constant. If you were to compare Thanksgiving 100 years ago versus today, it's safe to say families probably followed the same holiday script in 2016 as they did in 1916: Everyone starts the morning hangry; there are several narrowly-avoided kitchen disasters; and after half an hour of uncomfortably skirting around politics at the dinner table, everyone naps harder than they have since last year.

Or... maybe that's just my family.

In any event, any holiday that's been around as long as Thanksgiving changes with the times, so the traditions themselves haven't stayed the same. Some have fallen by the wayside over the years, and new ones have taken their places. In fact, Thanksgiving's history is a little more complicated than you may realize. Although George Washington issued a proclamation in 1789 declaring Nov. 26 a "national day of thanks," it didn't become an official holiday until 1863, when Abraham Lincoln designated Thanksgiving a federal holiday celebrated on the fourth Thursday of every November. Several decades later, then-president Franklin D. Roosevelt changed this to the third Thursday of the month, but that only lasted two years before he yielded to congressional pressure to change it back.

See what I mean? Much of the holiday's history between its 17th century origins and the modern day is glossed over, but Thanksgiving has undergone some major changes. Here's a comparison of Thanksgiving today and the way it was a century ago.

2016: It doesn't matter if you're actually watching it; somewhere in the house, a television is tuned to the annual Macy's Thanksgiving Day Parade.

1916: Unfortunately for the people of 1916, the Macy's parade didn't actually exist yet; the first Macy's Thanksgiving Day Parade took place in 1924. However, there was something called the Ragamuffin Parade — more on that below.

2016: As soon as Macy's parade is over, the television is automatically flipped over to a football game. It's a law of the universe.

1916: Radio, not television, was the primary form of broadcast entertainment, but football games were still a Thanksgiving tradition at the time. Although the National Football League wasn't founded until 1920, by the turn of the century, many universities and high schools had solidified Thanksgiving rivalries, and professional football leagues often hosted games on the holiday. However, the first NFL Thanksgiving game didn't happen until 1934.

2016: It's a good thing Thanksgiving dinner knocked you out at 6 p.m., because you and your mom have a date with the nearest shopping mall at 3 a.m. for Black Friday.

1916: The Friday after Thanksgiving was just any other day. Black Friday began to take shape during Franklin Roosevelt's presidency, but didn't start to become the massive shopping holiday that it is today until the '80s.

2016: The only ragamuffins are your littlest cousins gathered at the kids' table. (And secretly, you wish you could join them.)

1916: Remember the Ragamuffin Parade I mentioned earlier? That's what I'm talking about here. In the early 20th century, Thanksgiving actually bore a strong resemblance to modern-day Halloween. People of all ages used to wear costumes and masks for the occasion, and Thanksgiving masquerades took place around the country. This included the aforementioned Ragamuffin Parades, in which kids dressed as beggars asked strangers on the street for treats. (Yeah, I know. Suuuuper un-PC. Sigh.)

1916: There's been some debate about who actually invented the turducken, but by most accounts, it didn't appear in its pure form until the '80s. So unless some enterprising grandmother came up with her own recipe and the family kept it a secret, anyone who wanted turkey, duck, and chicken for Thanksgiving in 1916 had to eat them separately. (They still ate turkey, though.) Which brings us to...

2016: A turkey must make an appearance, of course, but there's also vegetables, pumpkin pie, stuffing, cranberry sauce, and more. There may be some vegan or vegetarian options (or an entire vegan or vegetarian spread, if that's how you and yours roll), and most dishes probably make an attempt at being healthy — or at least not outright unhealthy.

1916: Turkey was on the menu, but the sides were a little different: puddings, pastries, and soups were common around that time. I'm not going to lie, the modern Thanksgiving dinner sounds a lot more interesting.