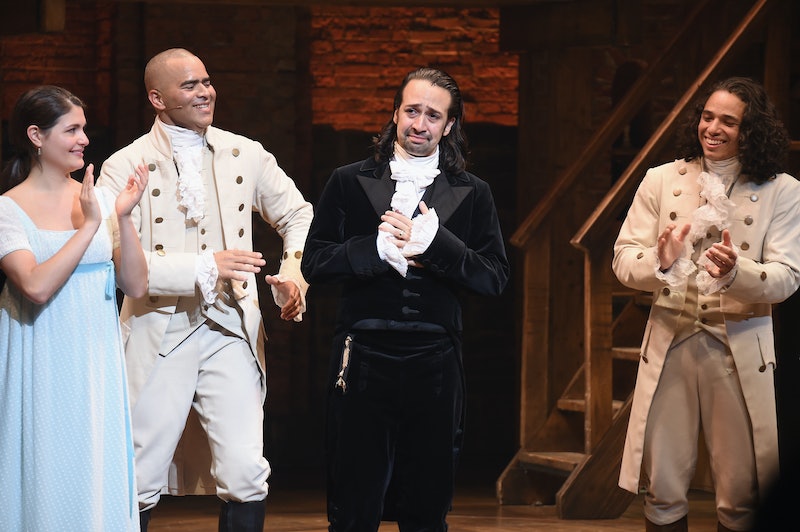 The cast of Hamilton made a last-minute change to their curtain call address in order to speak directly to one high-profile audience member on Nov. 18, and the internet is abuzz because of it. The cast of Hamilton urged Vice President-elect Mike Pence to work on behalf of all Americans in a statement read by Brandon Victor Dixon, the actor who portrays Aaron Burr, the third vice president of the United States. The incident (and President-elect Donald Trump's subsequent reaction) have inspired a slew of Hamilton-Trump memes, bringing a bit of historical comedic relief to the weekend.

News of the Hamilton cast's statement sparked outrage from both Trump and many of his supporters. While Trump demanded the cast apologize for having "harassed" Pence, his supporters called for a boycott of the already sold-out Broadway musical. The entire incident — from theories as to how Pence came to have tickets to the show to Trump supporters' demands for a boycott — has inspired more than a few chuckle-inducing memes.

I think it's important to stress that while memes can be a great resource for letting your post-election frustrations out, they're a poor substitute for actual civic engagement. While there are many ways to speak out on issues important to you, a meme — no matter how hilarious — should not be where your voice begins and ends. And while there are many methods of effective protest available for those who feel at odds with Trump's administration, a meme is not one of them.

That being said, here are some of the best Hamilton-Trump memes currently out there:

A Joke To Set The Scene

A Joke About Musicals Pence Might Enjoy (Or Not)

A "We Are All Biden Right Now" Joke

If You Don't Know, Now You Know, Mr. President

A Change Of Characters Joke

#BoycottHamilton Is A Real Head-Scratcher

There's Some Saturday Morning Homework For You

While Friday's incident has inspired a handful of new Trump-related Hamilton memes, fans of the hit Broadway musical have been using it to make light of this year's presidential election candidates since the primaries.