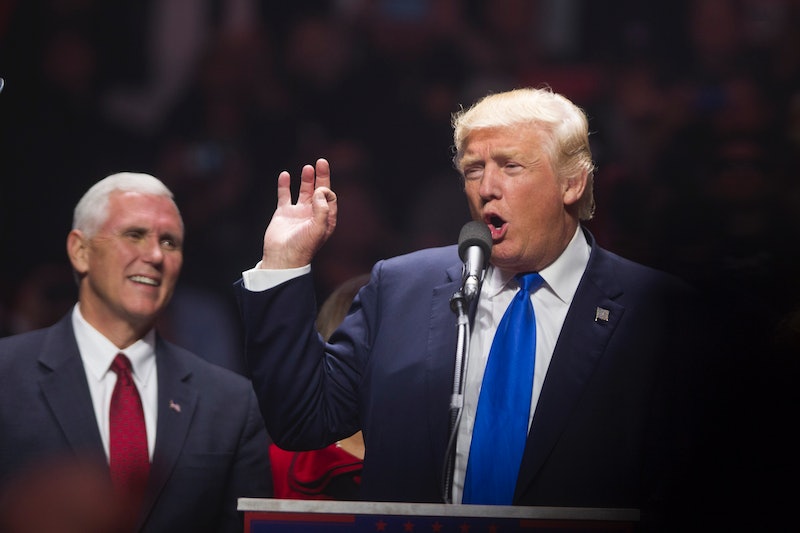 Say what you will, but you'd be hard-pressed to find substantial proof that president-elect Donald Trump is a man of very few words. Quite the opposite, in fact. Just look at his comments in defense of Vice President-elect Mike Pence attending a performance of Hamilton . It's well-known at this point that Trump seems to use Twitter as a platform to rail against those he may perceive as a direct threat to his own personal well-being and brand; in this instance, Trump extended that bubble in an attempt to shield Pence from any whiffs of contemplative criticism cast upon him. He was clearly not enthused or supportive of the Hamilton cast's words for Pence, but has Trump ever seen Hamilton ? I'm dead serious, folks. Does our president-elect know anything about the people and, by extension, the musical he is demanding an apology from?

Trust me when I say that I searched for hard evidence that Trump has set foot in the Richard Rodgers Theatre at any point since it opened there in 2015. Hell, I couldn't find any evidence that Trump has attended a performance at any stage of its development (going as far back as Lin-Manuel Miranda's first performance at the White House in 2009). In casting out this indiscriminate loathing on the Hamilton cast, Trump's blithe unawareness of the nature of the groundbreaking musical means that, in rhetoric and in action, he ends up with proverbial egg on his face.

Sure, it's not necessary for Trump to have seen Hamilton in this case. He doesn't need to see or participate in anything if he doesn't want to do so. Rather, in demanding that the cast and crew of Hamilton apologize to Pence for their very calm, reasonable, and wise speech on Friday night, Trump's non-attendance for previous performances means he doesn't understand the thing which he is criticizing. If he knew of the themes of Hamilton, the historical context of the play, or even the fact that Hamilton has one of the most diverse and prominently black casts on Broadway in recent memory, then he would know that this show is about the very rights and freedoms he could potentially work to eradicate during his time in office. Furthermore, he would not have been so shocked at the cast's curtain call speech, because, had he been in attendance, the cast would likely have addressed him, as they have addressed other prominent events and figures during their run.

Not understanding the work itself or the practices on- and offstage by the Hamilton cast exposes Trump's apparent ignorance of the highly political and social value of theater. Hamilton itself is a very politically-charged piece. It challenges the ideas of the right to govern, how to govern, who can govern, and the inner turmoil that stems from revolutionary thinking (I hope this sounds succinct rather than reductive).

Meanwhile, those who have seen Hamilton, or who are deeply familiar with its music, have readily applied their knowledge to reply in kind to Trump's demand for an apology. Taking to Twitter themselves, fans have tweeted Hamilton lyrics at Trump and Pence in an attempt to showcase just how prescient and relevant the musical is against the Republicans' platform. In doing so, the knowledge of the show can be used as a peaceful rhetorical tool, an opportunity to showcase exactly why criticizing those making such noble art is a faulty move.

Should we be at all shocked that Trump hasn't seen Hamilton? I don't think so. It's hard to be shocked by a man so unconsciously committed to shocking the nation, for better or for worse.