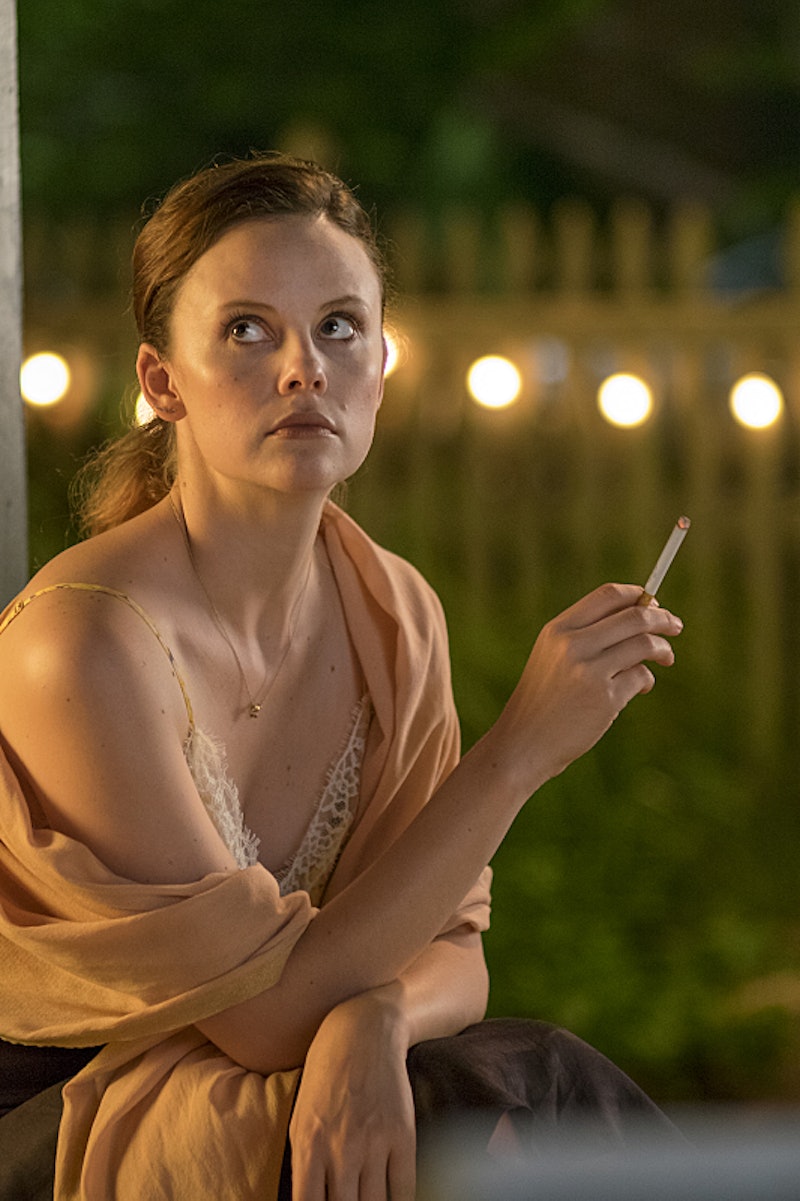 During the time jump of The Affair, Noah Solloway spent three years in prison and acquired a seriously questionable mustache. But some things remain the same and his deplorable behavior in The Affair Season 3 premiere confirms that Noah won't be in my good graces any time soon. Upon his release from prison, Noah gets a job teaching a writing course at a university in New Jersey with the hopes that he'll eventually be offered a full-time position. He doesn't do himself any favors when he publicly humiliates a student about her writing, but it ultimately leads to Noah and Audrey's conversation about rape culture on The Affair, which was a deeply impactful, important plotline throughout the premiere.

After Audrey reads her story aloud in class, Noah offers the least constructive criticism possible and brazenly mocks her by asking if her work was meant to be satire. He doesn't stop there, and tells Audrey to get off her couch and go outside to "risk some real live human interaction" or "go visit some struggling neighborhood and see real people try to deal with real problems so you can go home and write about that." After she gathers up her books and leaves the room in tears, her classmate Charlotte schools Noah by pointing out that Descent isn't exactly a paradigm of socioeconomic representation.

When Noah arrives at a dinner party hosted by a colleague that evening, he's surprised when Audrey answers the door and explains that the host is her advisor. Noah stays quiet during the dinnertime conversation in which Audrey and several male and female students debate the definitions of sexual assault and consent. Although Noah brought her to tears earlier in the day, Audrey is a force to be reckoned with (please tell me she'll get more screentime this season) and she asks him point blank if a scene from Descent was meant to be rape. Based on her description, the scene was clearly inspired by an aggressive sexual encounter between Noah and Allison that was graphically depicted in Season 2. Noah's ridiculously problematic response is:

"I wouldn't say Lana consented, but I think she enjoyed it. I think sex can be about both wanting and not wanting. It's a war between the intellect and the instinct, between shame and desire — and that's what makes it so interesting... and impossible to legislate."

Noah's words are jarring because the Descent scene was based on an actual sexual encounter with Noah's wife — and he apparently still doesn't know whether or not she actually consented, but he has the audacity to assume that she enjoyed it. It also indicates that the couple never had a conversation about whether or not they were on the same page in terms of sexual boundaries — and I'm seriously relieved that Allison is no longer in a relationship with Noah. (Although that doesn't stop him from leaving her a voicemail prefaced by the words, "I know you told me not to contact you, but...")

And, Noah's mindset is even more disturbing because he blatantly says that consent is "impossible to legislate," which is a truly horrifying statement. He's a fictional character who represents the countless people who honestly believe that consent is "murky" and the definition of rape tends to be a "gray area." This surely helps explain why only six out of every 1,000 perpetrators will spend a day in prison and a man who brags about groping women was elected president on Nov. 8.

When Noah and Audrey have a brief one-on-one conversation outside, he asks her if she truly feels unsafe in his class and offers a half-hearted apology for humiliating her that day. Of course, this apology is accompanied by a challenge to take risks as a writer and push herself out of her comfort zone. Audrey's response is concise but spot-on:

"What you don't seem to understand about women in general is that we feel unsafe all the time. At class, at parties, job interviews, getting into an elevator, parking our cars, walking down the street at night... I don't need you to push me out of my comfort zone when I've never been inside one."

There's no way for a man to experience what day-to-day life is like for a woman — but listening and sympathizing should be enough to make them allies or at the very least understand that consent, sexual assault, and rape culture are very real and deeply important issues. Out of everything Audrey says, the words that resonated with me most are that she's never been inside a comfort zone. Like so many other women, I haven't either — and I'm both grateful and pleasantly surprised that The Affair is addressing rape culture in such an honest way this season.