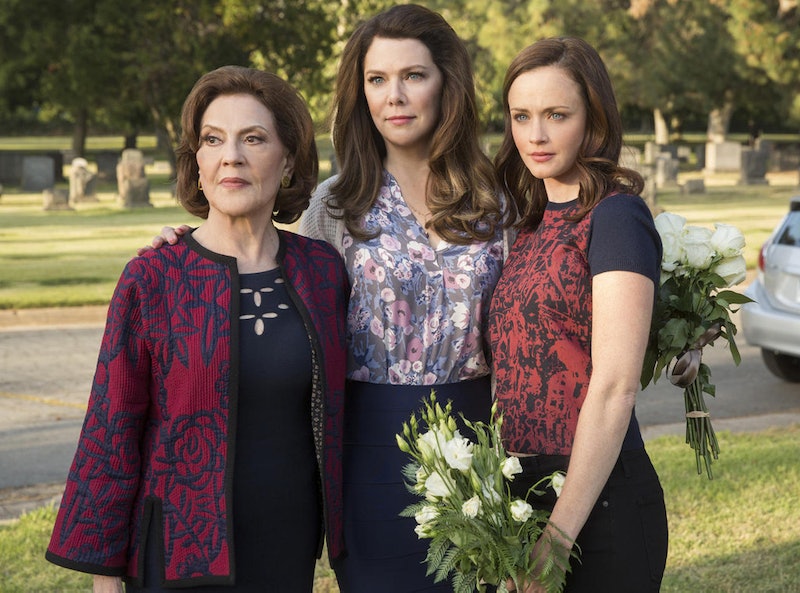 When the Gilmore Girls series finale aired in 2007, I was 18 years old and just a week away from my high school graduation, and I thought I was saying goodbye to my favorite show forever. Now, in 2016, at 27 years old, I couldn't be more thrilled that I was wrong. Mere days stand between us and real, actual new episodes of Gilmore Girls thanks to Netflix, and I have a feeling it will be worth the wait — especially if the four seasonally themed episodes fill me in on everything I've been dying to know for the past nine years. There are so many questions the Gilmore Girls revival needs to answer, and I can't wait to find out if all these little mysteries will be solved in "Winter," "Spring," "Summer," and "Fall."

For the past year, I've been soaking up every spoiler as it comes and watching the trailers over and over again, trying to catch new details I might have missed the first 50 times around. But for all the information about the series that has come out, I have yet to find the answers I'm looking for, so that leaves me with no choice but to wait until I actually get to watch the episodes when they hit Netflix on Friday.

These are all the questions I'm going to need answers to in the new episodes. Gilmore Girls, do not let me down!

1. What happened after Luke & Lorelai kissed in the finale?

It's how the original series ended, and obviously, they're together now, but what happened next? Did they get back together right away?

The saddest question, but necessary.

3. Will his funeral make me cry forever?

4. Why is Emily wearing jeans?

There has to be a reason, because this has never happened in the history of the entire show.

5. What will change about her relationship with Lorelai now that Richard’s gone?

Will it be for the better or the worst?

Being that she's only in one episode of the revival, I'm assuming she's left Stars Hollow. Why would she do that? Why would anyone do that? I want to move there.

7. Who’s running the kitchen at the Dragonfly?

If Sookie's not around, somebody has to do it, and I know it's not Michel. Plus, she wouldn't leave her kitchen to just anyone.

8. How are they gonna explain that she’s only in one episode? She was in the kitchen!

Is it a surprise? I love surprises.

9. Did Hep Alien ever make it big?

I'm guessing not, but you never know.

10. Is Lane even still doing music?

I just wanted so much better for her than what the show gave her in the end.

This is not a person who spends a lot of time unemployed, so for her to be so lost, something huge had to have happened.

It better be good!

15. And what happened between her and Logan?

Is he being a buttfaced miscreant these days?

17. And what’s the deal with this new boyfriend?

Supposedly his name is Paul, and we know exactly nothing about him, including whether he's Rory's boyfriend, or in a relationship with someone else.

18. Will Luke and Lorelai ever get married?

Because I really want them to, but I don't know if it will happen!

Their kids would be so cute!

Jess. Heart eyes are back.

21. Is Jess still the best part of this show?

22. Are Paris and Doyle married yet?

They are meant to be. Do not deny me this, A Year In The Life.

23. Do they have kids? Are they brilliant?

They'd have to be.

24. Are Kirk and Lulu married yet?

Another couple destined to be together.

25. Where is everyone’s lives when we pick back up?

I don't need too much catching up, but enough to feel like I'm filled in on the last almost decade.

I want to know, but then I also don't.

28. What are Paris and Rory doing at Chilton?

I've been wondering about those photos.

29. Did Christopher ever get his life together?

Christopher is the worst, am I right?

And what about Doula? How is Doula?!

31. What are the final four words?

32. Will there be more episodes?

The only acceptable answer is yes.

Move over, Black Friday. I have a date with my TV and my Netflix account... and there will possibly be a lot of weeping going on. Fingers crossed we get the answers to at least some of these questions!