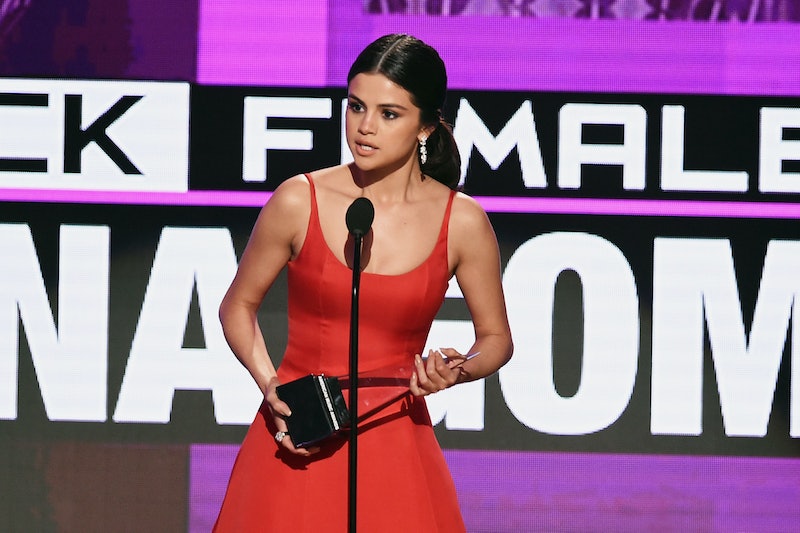 The internet lost its collective mind when Selena Gomez appeared at the 2016 AMAs for her first red carpet appearance since her decision to take a break from music in August. The singer has been dealing with a lot of personal and emotional issues, which was not helped by the fact that she struggles with lupus, and stepping back from the spotlight was the best thing she could have done for herself. So, when she took to the stage to accept the award for Best Pop/Rock Female Artist, Selena Gomez's heartbreaking acceptance speech was so powerful that it served to show exactly what an icon and role model she is.

"I want to be proactive and focus on maintaining my health and happiness and have decided that the best way forward is to take some time off," Gomez said in April, before going on to thank all of her fans for their support. Her love for her fans once again came up as she took the stage on Sunday night, and she credited them with not only getting her through this situation but also sent her wishes for them to be as strong as she was trying to be.

In 2014, this stage was actually the first time I was authentically, 100 percent honest with all of you. I think it's safe to say most of you know a lot of my life whether I liked it or not. I had to stop because I had everything... and I was absolutely broken inside. And I kept it all together enough to where I would never let you all down, but I kept it too much together to where I let myself down. I don't want to see your bodies on Instagram. I want to see what's in here [your hearts]. I'm not trying to get validation nor do I need it anymore. All I can say from the bottom of my heart is that I am so grateful that I have the opportunity to be able to share what I love with the people that I love. And I have to say thank you so much to my fans because you guys are so damn loyal, and I don't know what I did to deserve you. But if you are broken, you don't have to stay broken. And if that's anything whether you respect me or not, that's one thing you should know about me. I care about people. This is for you. Thank you.

If you weren't tearing up at this speech, then maybe the sight of Lady Gaga tearing up in the audience will be enough to get you — not to mention the way she full-on cheered Gomez on.

I don't know about you guys, but this was a beautiful moment. The courage it must have taken Gomez to come out, and to make this speech, is so raw and real that it just reminds everyone, and informs everyone who didn't already know, that she is someone who is worthy of her status as a role model.