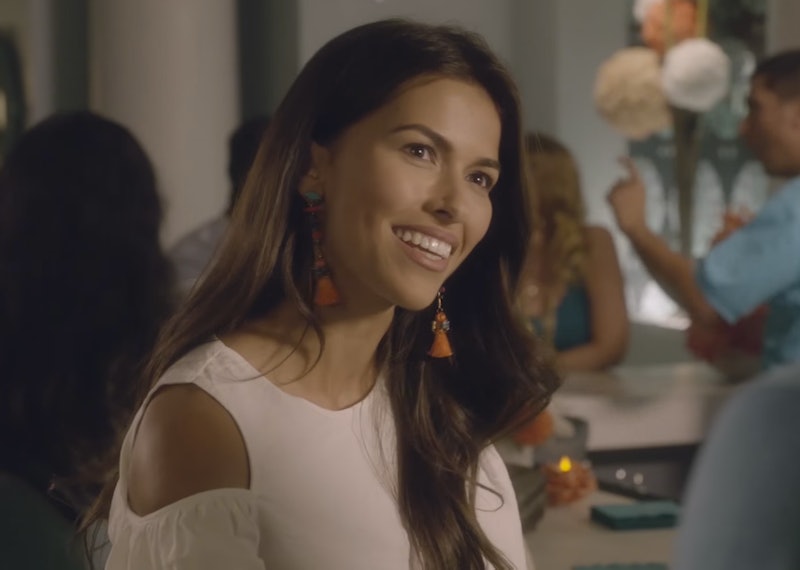 While it would be great to just be excited that Jane has a new family member in her cousin Catalina, unfortunately, this is Jane the Virgin. Since the telenovela-inspired show has taught fans to trust no one, it's very likely that Catalina is up to no good on Jane the Virgin. Jane's third cousin is no doubt charming, but considering that she showed up out of nowhere, she already slept with Rafael, and Alba doesn't trust her, it seems that she is poised to become the series' next big villain.

When Catalina first showed up at Jane and Michael's house during "Chapter 49," it was easy to immediately be suspicious of this long-lost cousin. And Catalina's actions during "Chapter 50" only confirmed that. Beyond unintentionally (or intentionally?) making Jane feel like her life is boring, she definitely crossed some lines. She insulted Alba by claiming that the dispute between Alba and her sister was actually Alba's fault. And she dated Rafael with no real concern for Jane's feelings. While Jane shouldn't necessarily feel jealous, she does have every right to feel uncomfortable with Rafael dating her family member — cause, you know, they have a child together.

Speaking of Rafael, he has a history of being duped by the women he is romantically interested in. The examples pretty much start and end with Petra (with Anezka thrown in there for good measure), but the point is, his judgment isn't always the best. The fact that he feels a spark for Catalina and is already so enamored by her is definitely not a good sign. And Jane the Virgin wanted viewers to be wary of Catalina as she lounged on his penthouse deck after they slept together in the final moments of the episode.

Then there is Alba. She apologized to Jane for snapping at Catalina, but Jane's abuela also stated that she doesn't trust this new cousin. Catalina reminds Alba of her sister (and Catalina's grandmother) Cecilia. While Alba obviously has strong feelings when it comes to her family in Venezuela, if I have to choose between trusting Alba or trusting Catalina — I'm going with Alba any day.

So, it's established that Catalina is most likely shady — but what damage could she do? Well, apparently her and Rafael share an acquaintance from his partying days. Does that mean Catalina used Jane to contact Rafael and has something sinister in mind when it comes to him? Some fans on Twitter think that could be the case — and one fan even has the brilliant theory that Petra will have to save Rafael from Catalina.

Another option is that Catalina is Sin Rostro. Since the series did the Rose in disguise storyline with Michael's partner Susanna in Season 2, this seems less plausible. Yet, we have no idea where Rose is.

My guess? That Catalina might be involved with that other crime lord — Rafael's mom Elena. Yes, Mutter is allegedly dead, but her dying message was about "the son" (or sun — we don't know yet). And Rafael's brother Derek could still be out there, using Elena's crime connections as well. Maybe Derek sent Catalina?

No matter how Catalina turns out to be bad, Jane the Virgin fans are preparing for the worst. And at this point, the most surprising thing would be if Catalina was actually being genuine and trustworthy this entire time. Now, that would be a twist.