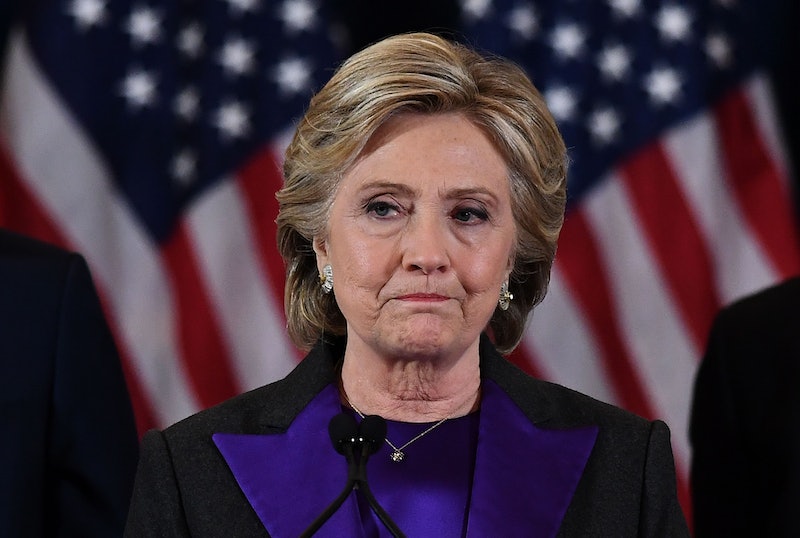 Many people hoping for our first female president found the results of the 2016 election discouraging. But Hillary Clinton's most popular tweet during the election reminds us that it wasn't all about who won or lost. While Trump's win did speak to many problems our country faces, the fact that Hillary ran and had the support she did was still significant, and her loss doesn't mark the end of the fight for women's representation in politics.

"To all the little girls watching... never doubt that you are valuable and powerful and deserving of every chance and opportunity in the world," the tweet reads. It's gotten over 600,000 retweets now — more than any other election-related tweet by her or Donald Trump, according to BuzzFeed News. (Bustle has reached out to Twitter for confirmation and will update this post if/when we hear back.)

Update: According to Twitter's Nick Pacilio, out of the more than one billion tweets sent about the 2016 election, this tweet from Clinton was the most retweeted.

Earlier: The line is from Clinton's concession speech; the full passage reads:

And to all the women and especially the young women who put their faith in this campaign and in me, I want you to know that nothing has made me prouder than to be your champion. Now, I know, I know we have still not shattered that highest and hardest glass ceiling but someday someone will and hopefully sooner than we might think right now. And to all the little girls who are watching this, never doubt that you are valuable and powerful and deserving of every chance and opportunity in the world to pursue and achieve your own dreams.

Many people viewed a Hillary win as the ultimate marker of women's progress. And it would've been a big one. But it wouldn't be fair to her or to women to draw a conclusion about what women are or aren't capable of solely based on the election results. No doubt, her loss demonstrates how difficult it is to be a woman in politics or pretty much any male-dominated profession. In the grand scheme of things, though, the election is one event in women's history, and there will be — and already have been — many others.

The fact that we had our first female major-party presidential candidate is significant in of itself, as is the fact that she won the popular vote. Her ability to exceed Donald Trump's votes by almost 1.7 million shows that although there are many people in this country who support Trump's misogynistic and racist views, the majority would have rather seen a woman in the White House.

Even if Hillary had never run in the first place, that doesn't take away from the advances in women's rights we've seen in recent years. In fact, this election itself involved one important marker of progress: There will now be more women of color in Congress than ever. Cortez Masto became the first Latina in the Senate, and Kamala Harris became the first Indian American senator.

And beyond that, even if we didn't see any of these advances, that still wouldn't be a reason to give up. Just because Hillary isn't our first female president doesn't mean someone won't be one day. And if there weren't already women with a shot at that title, that shouldn't stop any woman or girl from thinking it could be her. The Clinton campaign may be over, but Pantsuit Nation lives on.

More like this
Beyoncé & Madonna’s “Break My Soul” Remix Honors A Group Of Black Icons
By Stephanie Topacio Long
Your Daily Horoscope August 11, 2022
By Mecca Woods
How To Use Instagram Story Highlights So Everyone Sees Your Fave Stories
By Brandi Neal and Emma Carey
How To Change Your Twitter Handle
By Emma Carey
Get Even More From Bustle — Sign Up For The Newsletter