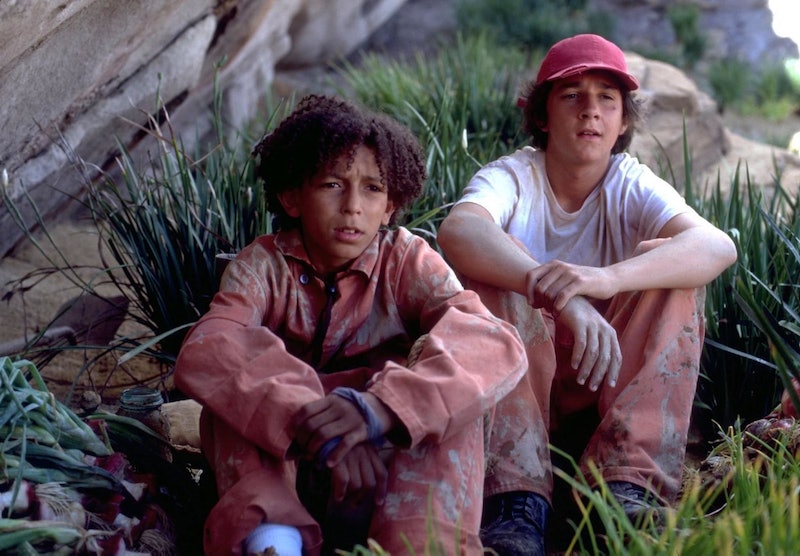 Saying goodbye to things on Netflix is just like saying goodbye to your high school graduating class. You have every intention of seeing these people again in the future, but it's like, will you actually? That may be pretty unlikely. Thus, it's a sad parting of ways. Cozying up to your TV — whether it be Netflix and chill with a significant other or with a box of pizza (how I like to do it) — is the only worthwhile winter activity in my book. And from the outbreak of creepy clowns to the presidential election, everyone could use a breather from the chaos of 2016 before ringing in the new year. This year has been hard enough, don't let Netflix opportunities pass you by.

With the incoming of amazing streaming options (ahem, Gilmore Girls revival), there are also selections leaving the network in December 2016. Some are classics, others are fluffy comedies, and there's even some tearjerkers to really set the mood for the entire month ahead. So grab as many snacks as possible and get ready to Netflix harder than you ever have before, in order to catch these shows and movies before they leave the streaming service next month.

This sweet story takes place in the beautiful land of Hawaii, and if it doesn't have what it takes to warm your cold winter heart, I don't know what does. Adam Sandler and Drew Barrymore rekindle their epic on-screen chemistry in a comedy that will make you laugh and cry every damn time.

This '90s cult classic about a bored middle-aged man, who becomes obsessed with his daughter's teenage friend, is a must-see. Thank god for House of Cards, or I'd be having Kevin Spacey withdrawals.

This gripping TV mini-series reenacts operations which were held by special forces, with the use of real-life footage and people who were part of them. It gets intense, so I'd recommend a drink or two with this one.

Grace Helbig, Hannah Hart, and Mamrie Hart make their way to big screen in a story about summer camp. Because who doesn't love a good camp story? When Elise (Helbig) ditches the real world to return to camp as a counselor, she finds herself bonding with estranged friends to save the camp's future. Perfect to give you the summer dose you need.

This '54 flick is a modern version of Georges Bizet's opera Carmen with an African-American cast. In the musical-turned-film, a solider (Harry Belafonte) falls for the charming Carmen Jones (Dorothy Dandridge) unbeknownst to him that their love would lead him to quite the adventure and crime of passion.

This light-hearted flick depicts the ongoing suburbia battle between house pets: cats and dogs. The animals talk as they fight for the top and it never gets old. Who doesn't want to watch an hour and 25 minutes of cute puppies and cats speaking human talk behind their backs? I mean, c'mon.

In this adorable animation, Curious George is on the mission to cheer up his homesick friend Hundley. His remedy is a dosage of spring, which most people could use right now. It's a good choice if you're spending holiday time with young siblings or family members.

An early display of Shawn and Marlon Wayans' hilarious antics, Don't Be a Menace tells the story of Ashtray (Shawn Wayans), who's forced to live with him family in a bad LA neighborhood. If you feel like kicking it old school with some laughs, this one is for you.

Cate Blanchett shines in her role as Queen Elizabeth I in this historical drama. Between the layered plot, intricate costumes, set details, and Blanchett's line delivery, this is one worth catching.

Sam Neill and Laurence Fishburne star in this chilling sci-fi flick about a spacecraft team which has to revisit a ship that reappears after it had gone missing. But the ship isn't the same upon its return, and needless to say, some terrifying happenings go down.

This independent British film introduces an idea of what happens when love meets science. Super smart, interesting, and endearing at the same time, check this out for a romance unlike the majority of the others out there.

This documentary follows extreme skier Shane McConkey in an uplifting story from his childhood to his career as a professional freeskier. The close-up shots of his tricks on the mountains are enough to give you an adrenaline rush like you're there. Peak winter vibes. (See what I did there?)

In this inspiring sports documentary, an Indiana high school basketball team becomes a symbol of hope when its members refuse to let their reputation fall along with the town.

Old Hollywood darlings Cary Grant and Marilyn Monroe star in this comedy about a chemist's (Grant) anti-aging formula gone wrong when a loose chimpanzee gets it hands on it. The effects are so reverse-aging, causing Grant's character to act like a teenager and make shameless passes at the secretary (Monroe). Oh, the good ol' days.

This fascinating docu-series shows modern attempts at solving mind-boggling mysteries of history. Some include stories surrounding figures and objects including Hitler, the Holy Grail, King Solomon, and pirate treasure.

Neil Young fans, rejoice. This 2006 documentary, or "rockumentary," is shot over two nights during the artist's performance at Nashville's Ryman Auditorium. The film includes interviews with Young and his band, first-time performances of songs, and acoustic renditions of the classics.

Ben Affleck stars in this sci-fi thriller as an engineer who unknowingly takes on a fatal mission, one he assumed would be a walk in the park, but leaves him being chased by government agencies. Uma Thurman and Aaron Eckhart also star in this gripping mystery.

Pirates Who Don't Do Anything: A VeggieTales Movie (2008)

If you're spending holiday time with little ones or just feel like being a kid, throw this big-hearted flick on and get to some of the adult options later. Think Pirates of the Caribbean, just no booze, no Johnny Depp, and certainly no epic sword fights.

Before it's too late, you have some prime opportunities to get your Marilyn Monroe on. In this '50s western, Monroe's character finds herself in the open with two other men on the hunt for revenge and salvation, all while trying to remain as civil as possible.

Billy Bob Thornton shines in this '90s drama. He plays a mentally-disabled man who's released from a mental hospital after 20 years, and finds himself on the mission to save his friend from a poor living situation. Thornton also wrote and directed the film, and his performance is truly one for the books.

Before there was Chris Hemsworth, there was Zachery Ty Bryan. Not to be confused with the 2011 hit, this movie chronicles Thor and his people on the quest to build their own kingdom, with deadly forces along the way.

This documentary tells the story of WWI through the eyes of those who lived it, primarily based on their unpublished journals and diaries.

In this action movie, Albert Brooks' character is dragged into a top-secret government mission when he learns his daughter's (Lindsay Sloane) fiancé's (Ryan Reynolds) father (Michael Douglas) is in the CIA. Because newlywed life and in-laws aren't scary enough.

Big-screen vets Goldie Hawn and Steve Martin star in this comedy remake about a couple on an interesting venture through New York City for a job interview.

I mean, this is a classic. If you're unsure of the true meaning of "Take My Breath Away," Iceman, or Maverick, you need to watch immediately. Young Tom Cruise will win you over as the cocky naval aviator who tries to win the affections of his flight instructor, played by Kelly McGillis. Nostalgia is always a good idea.

Based on the best-selling novel of the same name, this drama tells the story of three young women and their rollercoaster lives, from their careers in show business to tumultuous love lives.

This drama, based on the events of Sept. 11, tells the story of two Port Authority officers stuck in the rubble of the terrorist attack aftermath, as they trying to help others escape. The all-star cast includes Nicolas Cage, Maria Bello, Michael Peña, Maggie Gyllenhaal, Stephen Dorff, and Michael Shannon.

This documentary showcases the power of Batman's story, and the positive effect it's had on people and families from different walks of life all around the world.

This biopic is based on German national hero and WWI vet Manfred Von Richthofen, who was nicknamed the Red Baron.

If you're a sucker for Nicholas Sparks movies, this one is for you, my friend. James Marsden and Michelle Monaghan star in this film about two high school sweethearts reunited after 20 years, unbeknownst to them that there are serious threats working against their rekindled flame. Also, it features Marsden. Need I say more?

Shia LeBeouf stars in this film based on the book every '90s kid read at least once in their lifetime. After spending their days digging away at a detention camp under the commands of the warden, Stanley (LeBeouf) and his friends are determined to figure out why.

Tom Hanks and Audrey Tautou star in the first installment of Ron Howard's franchise based on the globally-recognized Dan Brown novels. A murder in the Louvre leads Hanks and Tautou's characters to a thrilling hunt based on clues in iconic paintings which challenge the fundamentals of Christianity. It's a total must-see and worth the entire two hours and 30 minutes of watch time.

This 8-episode CNN miniseries tells the story of a young Colorado couple who envisions building a marijuana empire.

Robert Powell narrates some of the most significant events from WWII in this 13-episode TV miniseries — all in color.

After growing up in an orphanage and building a friendship together, two young girls part ways in different countries to set the course of their lives.

Keri Russell and Josh Hamilton star in this thriller as suburbia parents, who fight to protect their family once it's targeted by mysterious, unidentified forces.

Your holiday season may or not may be complete without watching this hilarious film with Ryan Reynolds and Anna Farris. On the quest to win over his big-time high school crush, a Hollywood hot shot (played by Reynolds) finds himself in a series of unfortunate events in his New Jersey hometown with an eccentric pop singer (Farris) attached to his hip. As much as it'll make you laugh out loud, it'll also give you the feels.

A classic for any '90s kid, this one is worth the watch just for a good blast from the past. A young set of siblings take on the role of spies to save their parents (who are ex-spies) from the bad guy, and kick total butt in the process.

Hercules (Kevin Sorbo) — half-man, half-god — roams the mortal world fighting evil after his family is killed by his step-mother. You have six seasons, so start your marathoning now.

You'll have a busy next few weeks, but they will also be glorious.