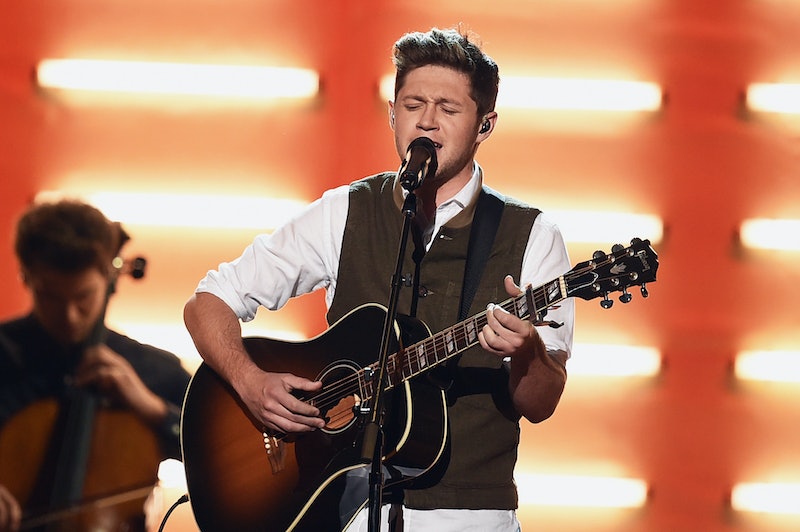 Out of all of the One Direction guys, Niall Horan has been the most low-key about his relationships. And managing to be low-key at all is a very impressive feat considering he was in one of the most popular boy bands in the world for many years. Bandmate Harry Styles has had highly public trysts with Taylor Swift and Kendall Jenner, and Liam Payne is currently dating Girls Aloud star Cheryl. As for Horan, he's single right now as he embarks on his solo career, but I can't help but wonder who Niall Horan has dated because I know that he has probably had his fun, as well.

There are only a handful of times that I remember Horan being rumored to be dating anyone. One thing is for sure, the 23-year-old holds his career as a priority in his life, as he always did with One Direction, so now that he's solo, a long-term girlfriend might still not be in the cards. He recently told SiriusXM about his love life: "Non-existent, currently... I've been busy sitting in studios, so I haven't had time for that."

He might be single for now, but Horan has dated — or been rumored to date — a mix of famous and not-so-famous ladies in the past.

Back in 2012, it was revealed that Lovato and Horan had been talking on Skype. Horan told Ryan Seacrest in an interview, "She’s a cool girl... I’ve gotten in contact with her, she’s really nice, but I don’t know what’s gonna happen.” It's unclear if any dating ended up actually happening with them.

In 2013, Horan and Goulding sparked some rumors after going out on a few dates. Although it didn't seem to turn into anything serious, Goulding finally commented on the rumors and confirmed their brief romance. She told Seventeen in March 2016, "We're still friends... We went on a few dates, and it was really fun. He's a really, really lovely guy. He's got the biggest sense of humor, he's very caring, and I see him as a genuine friend in the industry."

In late 2013, Horan was spotted with Barbara Palvin, a Victoria's Secret model. But although they appeared to enjoyed some dates together, including reportedly playing golf together, his rep told E! News they were "just friends." Palvin also said they were friends and told Digital Spy in 2014 of their supposed romance, "He's my friend. I've always been a girl [who] hangs out with boys, and I'm not going to change that... He's a lovely guy — fun, Irish, sarcastic all the time."

Whitelaw was a Australian student who Horan was linked to in early 2015, after video surfaced of Horan and Whitelaw being cozy and adorable, leading fans to speculate that he was taken. They reportedly went to a ball together that Payne threw for a charity, but it looked like the flame fizzled quickly and, according to the Daily Mail, the two split in June 2015 after a three-month fling.

Throughout the years, Gomez and Horan faced many dating rumors, even if their hangouts looked very platonic. In 2014, fans bumped into the couple having dinner over Valentine's Day weekend in London. In late 2015, E! claimed that the two were at a Hollywood party "kissing" and "hugging," but then the rumors fizzled out, as Gomez was rumored to be dating someone else and continued to be entangled in drama with her ex-boyfriend Justin Bieber going into 2016.

Vandycke is a Belgian student who is the most recent girlfriend prospect Horan has been spotted with. In July 2016, Horan and Vandycke went to the British Summertime Festival in Hyde Park. There was a lot of PDA from the two, but perhaps that was just a summer fling as Horan has since confirmed he is single.

Although Horan hasn't publicly had many serious girlfriends — and has mostly been followed by rumors — he is still a young artist who has plenty of time to settle down... eventually.