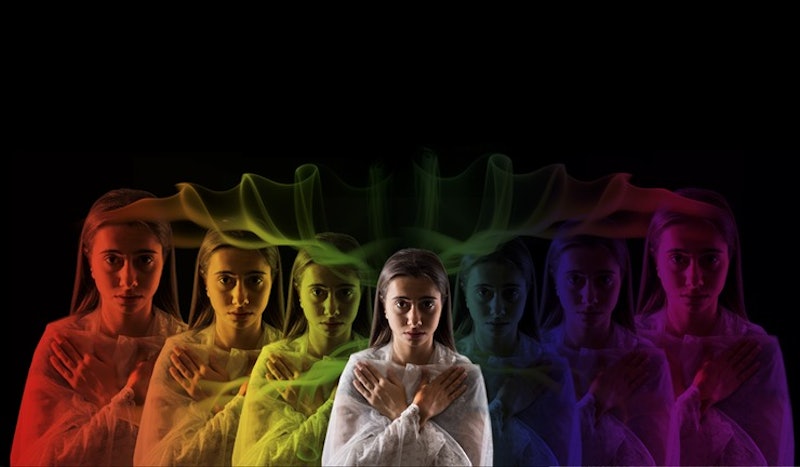 The fourth Saturday of every November is International Aura Awareness Day, which I doubt is a high-priority holiday for many of us, especially considering its close proximity to Thanksgiving. But there's even a hashtag dedicated to celebrate the day (#InternationalAuraAwarenessDay, obviously), in an attempt to spread awareness about what the human aura is, and how it affects our daily lives. The truth is, however, that most of us haven't the faintest idea of what an aura actually is. We may have heard it joked about by a wacky aunt or that eccentric, unemployed roommate in a TV sitcom, but for the life of us we couldn't explain what an aura is.

Here's a standard, simple definition of an aura: an electromagnetic energy field that surrounds people, animals, and things. Before you run in the other direction and declare this topic to be too hippie for your logical mind, you should know that most scientists recognize that everything in the world emits a certain kind of energy, so the aura isn't a completely ludicrous concept. You know how you just sense a particular feeling or vibe from each individual person around you? One person might make you a bit anxious, while another chills you out? Well, a lot of that has to do with their aura, which informs one's attitude and overall disposition.

By learning more about the spiritual and emotional significance of an aura, you may gain some insight into your interpersonal relationships — and maybe even discover a thing or two about yourself. Here are six things to know about auras.

The Aura Has Seven Layers

Also known as the subtle bodies, there are seven layers of your aura that correspond with the seven chakras in your body. The etheric is the first layer, also called the physical aura plane, which is closest to the physical body and is connected to physical health, pain, and pleasure. The emotional layer or astral aura plane comes next, and it extends up to three inches away from the body. Then there's the mental layer, which sits three to eight inches away and is related to your ego, values, and beliefs.

The fourth is the astral body, which is your love layer. It's correlated with your heart chakra and it's the layer that sits right in the middle of all seven, so it's said to connect the three lower auric planes to the three higher ones. Number five has a lot of different names: the manifestation layer, the etheric double, the spiritual aura plane. It reflects your spiritual health and connects you to the wider universe. The celestial plane is the sixth layer, which is all about your intuition and is linked with your third eye. Finally, there's the ketheric template, or the "I Am" layer, and this is your potential connection with the Divine (whatever that means for you). It extends up to three feet away from the physical body.

The Color Of Your Aura Is Reflective Of Your Physical, Emotional, And Spiritual Health

At any given time, your aura emits a mixture of colors and light (it will never be just one color), and each of these shades says a lot about how you're currently feeling. For example, if there's a brilliant yellow, it probably means you're feeling spiritually alive and energetic, and clouded red means you're feeling negative and dealing with some deeply buried anger.

Lisa Levine, MS, LAc, an acupuncturist, healer, and founder of the Maha Rose Center for Healing in New York, told Teen Vogue that the brightness of the colors of your aura are indicative of what's going in your life. "People struggling with depression often have dull auras," she says. Additionally, someone who is battling substance abuse can have a "dark and convoluted aura." A person who is healthy, self-confident, and positive, though, tends to have a bright, light aura that other people can sense, even if they can't see it.

Auras Can Be Captured In Photographs

Now that your curiosity is sufficiently peaked, you're probably wondering what your aura looks like so you can have a sense of your emotional and spiritual state. There are certain cameras out there that photograph your aura by pressing your hands onto metal plates that sit on top of electric boxes. You can then have someone interpret the picture and help you make sense of the message your aura is trying to send. Apparently, you can learn about your work ethic, spending habits, and the state of your love life.

Having your aura photographed has almost become a bit of a trend with names like Diane Von Furstenberg and Alexander Wang sharing their aura pictures with Harpers Bazaar last year. Not surprisingly, Gwyneth Paltrow and her Goop staff had their auras captured by a company called Radiant Human, which travels around the country to snapshot people's auras. If it sounds attractive to you, you can probably find a shop somewhere in your city that will photograph your aura for you.

We regularly read each other's auras without even knowing it. Levine tells Teen Vogue, "Most of us are more sensitive than we give ourselves credit for." We can sense someone's energetic body and we're automatically attracted to or turned off by it. In fact, all those times you met a person you just didn't like — maybe there was something strange you "couldn't put your finger on" — it was likely their aura you weren't vibing with. Similarly, other people react to your aura as well, depending on how it matches with theirs. It's certainly not the only thing that determines friendships and romances, but it's a factor nonetheless.

If you're not in a particularly great place in your life, your aura will reflect it. But you know you won't be stuck in this rut forever, which means your aura won't be dull for long. The good news is you don't have to do anything to change your aura after things get better. Just the natural shift in your emotional and physical health will result in an aural transformation, because your aura is always alive, and always connected to your body and the universe. There's no off switch, so it keeps up with you at every turn.

You Can Cleanse Your Aura If You're Not Feeling So Great

Once you become aware of the power of auras, you can consciously do a few things that will keep your aura nice and clean. A simple way to keep yourself clear is to merely envision your aura during a seated meditation. Close your eyes, picture a white light radiating from within your body, and then imagine it flowing through your whole system from head to toe. Think of that bright light clearing out the dullness in your aura and bringing you back to a healthy centeredness.

There are some habits you can partake in as well that might help you maintain your aural health. Sessions with an energetic healer might be the right way to go, but if that doesn't tickle your fancy, you can always go old school and get yourself some dried white sage. Smudging with sage is an ancient practice used in many indigenous cultures to clear out negative energy. Light your sage and wave the smoke around your home, as well as your whole body. You may not feel an instant change, but it will evoke a happy shift in your aura nevertheless.