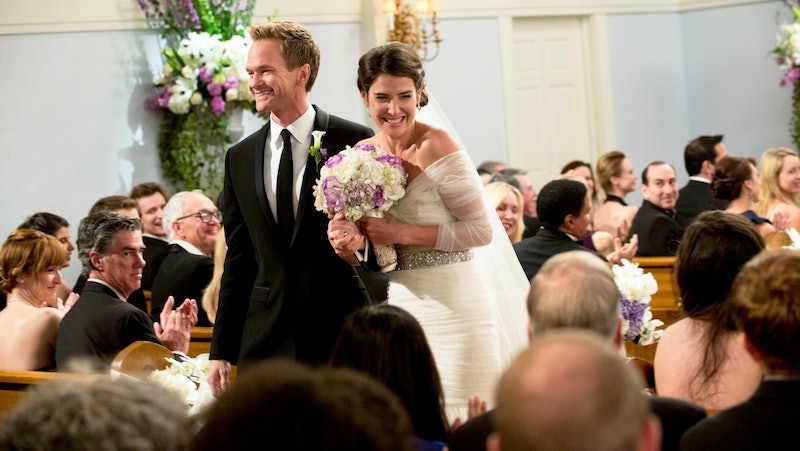 How I Met Your Mother creators Carter Bays and Craig Thomas have made it pretty clear over the years that they really enjoy screwing with audience expectation. They're from the same school as LOST's Damon Lindelof and Carlton Cuse, who would yell "it's not Purgatory, come on!" as our screens suggested, you know, the very opposite. A few weeks ago Cristin Milioti (aka The Mother aka Tracy McConnell aka RIP) was asked point blank if The Mother would die. "That's insane!" she responded. And now look at where we are. How can you build a functioning relationship on lies?

(I'm mostly kidding. What was Milioti supposed to do, say "you got us!" and then hand over advance screeners of the finale? Press junkets aren't easy on anyone.)

Still, that "we're kidding...or are we?...OR ARE WE NOT?!?" spirit informed a number of moments in tonight's HIMYM, moments that directly addressed some of Bustle's homegrown finale theories and/or just generally spun out new mystery the show never intended to resolve. "Give me 42 minutes," someone maybe once said, but don't ask me about it, "and I will pay every one of your fan theories lip service."

Theory #1: Ted has early onset Alzheimer's, and has been telling this whole story so that his kids might remember him and his life when he no longer can

Early in the episode, Ted is saying his goodbyes to The Gang when he reminds Barney of the time they licked the Liberty Bell. Barney: "that never happened." UH OH MEMORY ISSUES THIS WON'T END WELL. But that slip is never mentioned again, and for the rest of the episode Ted's memory appears to be in perfect working order.

No one knew about "Woman #31" (that sounds so congressional sex affair, right?) before the episode BUT it's safe to say some fans had surmised that Robin's infertility plot line might come back in some way. Would she be the mother of Barney's kid(s)? Would she be the mother of Ted's kids? No traction on either side of that bet, probably for the best. But not even a glimpse of the woman who gave birth to baby Ellie? Misogynistic plotting choices aside, this might have been a perfect opportunity for Britney Spears to come back.

This one wasn't entirely off-base, considering The Mother/Tracy did succumb to illness by the end of the episode and, for some time anyway, was sans wedding ring. But Ted and Tracy did get married, did have kids, and did have a life together for some time. So any "THAT'S NOT GOOD"s to follow the revelation in that Robots vs. Wrestlers scene that Ted and Tracy had not yet married? Misplaced mystery-hunting. Sometimes people live together and have kids, jeez, don't be so 1950s.

Theory #4: Without The Apartment that served as the epicenter of so much of the show, The Mother will die and Robin will be deeply unhappy for many years

Okay, I just made this one up 20 seconds ago in search of a fourth theory to round out what was feeling like kind of a thin list, but maybe there's some revisionist history truth to it! When Marshall and Lily finally ditch the apartment that had served (with MacClaren's) as the focal point of these characters' lives for so long, things fall apart for both Robin and Tracy. Worse for Tracy, who eventually dies. But Robin self-exiles from the group she feels she can no longer be a part of. In the first Tribal Council of every new Survivor season, Jeff Probst always tells contestants "in this game, fire equals life." And I think it's equally true of The Apartment.

It's funny -- in the end, HIMYM threw out most of its love of mystery and mythology to tell an (all things considered) pretty straightforward closing chapter. Ted met Tracy. They were in love, and happy for the duration of their time together. She died. And then, bolstered by his kids (and the fact that the writers conveniently reversed whatever changes they'd made to Barney in the last 3-4 years), Ted went after Robin again. The end.

I'm not saying it was the best ending -- in many ways it was sort of a gross one, actually -- but for all the concerns that HIMYM would really screw the pooch in this finale, well...it didn't! And sometimes that's the greatest gift of all.