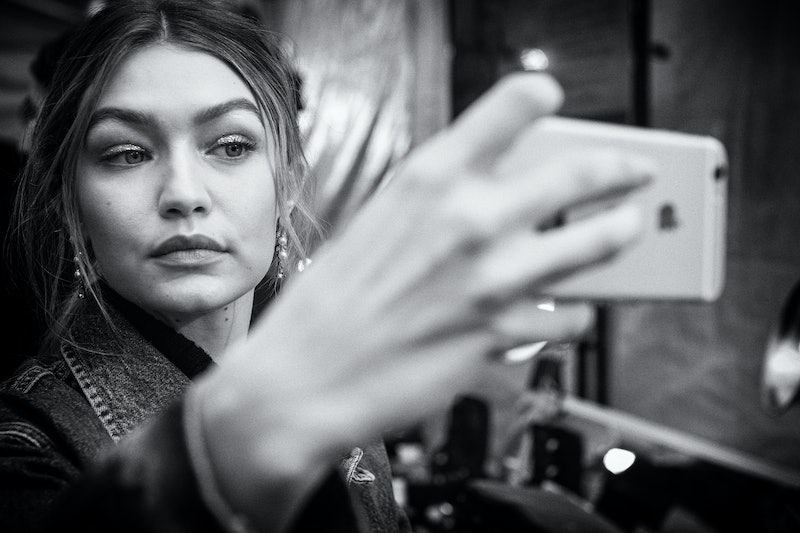 With over 25.7 million followers on Instagram, and 3.49 million followers on Twitter, Gigi Hadid is a master of social media. It's hardly surprising that the model is also on Snapchat, and consistently shares amazing videos, photos, and updates on the app. Living the somewhat glamorous looking life of an international model, Hadid is an impressive chameleon, constantly changing her make-up looks and hairstyles, while traveling around the world. These are just some of the reasons that you should follow her on Snapchat. Luckily, Gigi Hadid's Snapchat name is easy to remember.

Keeping things simple, you can find Hadid on Snapchat under the username "itsgigihadid". Her name is all kinds of cute, especially as it sounds like a mini-announcement, introducing the Tommy Hilfiger collaborator to the world. Of course, she needs no introduction. From her high-profile relationship with Zayn Malik, to her friendships with celebrity royalty like Taylor Swift and Kendall Jenner, Hadid has carved out a career quickly, and established herself as an important individual in the fashion world. I don't need to list any more reasons you should start following Gigi Hadid on Snapchat, as the model and designer's work speaks for itself. And the added bonus of having Malik appear in her Snapchat stories should be encouragement enough.

As well as making use of the amazing range of Snapchat filters, Hadid shares photos and videos of her home, her friends and family, and her boyfriend. Her Thanksgiving Snapchats in 2016 were particularly on point, with the model sharing a photo of her perfectly decorated dinner table, the look completed by a heart-shaped pie next to a pumpkin. It's obviously important to Hadid that she connects with her fans as much as possible, and Snapchat is another in a long line of social media tools that the model uses regularly. She continues to develop her brand, and to share her journey with her followers, making Hadid one of the most accessible models around right now.

The world famous model doesn't need any introduction, but Gigi Hadid's Snapchat name — "itsgigihadid" — is perfect, just as you'd expect it to be.