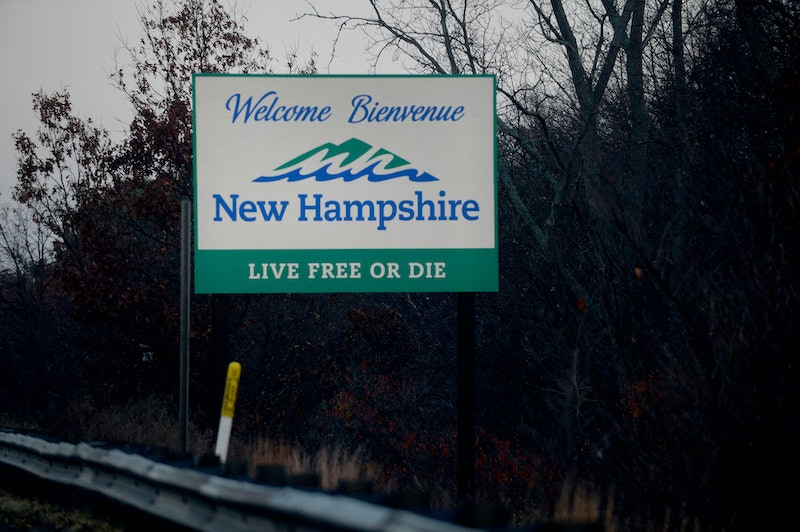 I'm a New Hampshire girl to the core. I may have been born in a Boston suburb, but I was raised in Southern New Hampshire, in a lil’ town called Londonderry, to be exact. It was lovely to grow up less than an hour from the beach, Boston, and the mountains. Why else do you think Walter White ended up in New Hampshire, sorry, I mean New Hampshah, in Breaking Bad ? It's because it really is that wicked awesome up here.

There are some things only we Southern New Hampshire natives can understand. You know you grew up here if . . .

YOU DRINK ICED COFFEE FROM DUNK’S ALL YEAR LONG

America may run on Dunkin’, but here in southern New Hampshire we run on Dunk’s, ice cold coffee by the one and only Dunk's — and not just because it's usually our only option.

YOU HAVE MIXED FEELINGS ABOUT AL KAPRIELIAN

Who doesn’t want their weather reports to come in the form of high-pitched exclamations from one of the state’s many beloved “celebrities”?

‘THE CITY’ IS ACTUALLY JUST MANCHESTER

You know, because it’s the biggest. It’s glitz and glamor has also helped it garner its nickname, Manch Vegas.

PEOPLE FROM MASSACHUSETTS ARE CALLED MASSHOLES

Ah! What the hell is wrong with those people and their lack of driving skills?! Get them off our roads and send them home!

YOU WENT ON A FIELD TRIP TO CANOBIE LAKE PARK …

Then, in high school, you went on a date there, too, because nothing says romance like Friday night fireworks at Canobie.

Yeah, we get it: We talk a little funny. But not as funny as the people in those two states.

YOU KEEP YOUR CLOTHES IN A ‘DRAW’

Where do you keep yours?

YOU’VE HAD AMERICAN CHOP SUEY MORE THAN A FEW TIMES

It wasn’t until I moved to NYC that I learned that this isn’t exactly the national treasure that I thought it was — it’s straight-up New England. This fact makes for a straight-up national tragedy.

The malls are packed enough as it is with Massholes thanks to our no sales tax up here, so Salem’s Rockingham Mall is definitely out of the question.

And you always will be.

Those damn Massholes again. Why can’t they go enjoy the foliage in the western part of their own state?

I mean, phonetically, they do make far more sense.

‘WICKED’ IS a FAR MORE ACCEPTABLE word THAN ‘REALLY’

Being so close to Massachusetts, it’s hard not to pick up the most renowned equivalent to the adverbs “very” and “really.”

YOU’VE ‘BANGED A UEY’ ONCE OR TWICE IN YOUR LIFE

Surely, a U-turn can’t be strictly a northern New England thing, but banging one totally is.

YOU OWN AT LEAST ONE ARTICLE OF RED SOX CLOTHING

Sox pride is unlike any other in the world. We're the greatest team on the planet — even when we're in last place. (Saying 'we' is necessary when speaking of the Sox, for obvious reasons.)

Despite the fact that the state keeps on going for miles and miles after that, for some reason, the majority of us southern N.H. kids don’t go much farther than the North Conway area. Unless, of course, we were making a run for the Canadian boarder to drink in bars before turning 21.

And when you’re told they don’t have jimmies, but you can see the jimmies with your own eyes, there is a verbal dispute that is likely to end in, “Fuck you, guy.”

YOU’RE PICKY ABOUT YOUR MAPLE SYRUP

Because we make the best.

HAMPTON BEACH Was COOL WHEN YOU WERE IN HIGH SCHOOL, BUT NOW ONLY PORTSMOUTH WILL DO

It’s about growing up, evolving, and moving past fluorescent bikinis. “The decks” were also totally your scene once you started going to UNH.

A FRAPPE IS A FANCY MILKSHAKE

Note that we’re not saying “frappé” or “frappuccino,” but “frappe” pronounced “frap.”

YOU KNOW SOMEONE WHO’S WICKED GOOD FRIENDS WITH ADAM SANDLER

Although he was born in Brooklyn, Adam Sandler was raised in Manchester, so we like to claim him as our own. We also like to point out that both Seth Meyers and Sarah Silverman are from Bedford.

WHEN ASKED About YOUR AVERSION TO HELMETS AND BELTS, YOU QUIP, ‘LIVE FREE OR DIE, BITCHES.'

It’s, like, only our state (and life) motto, and it's on our license plates, to boot.