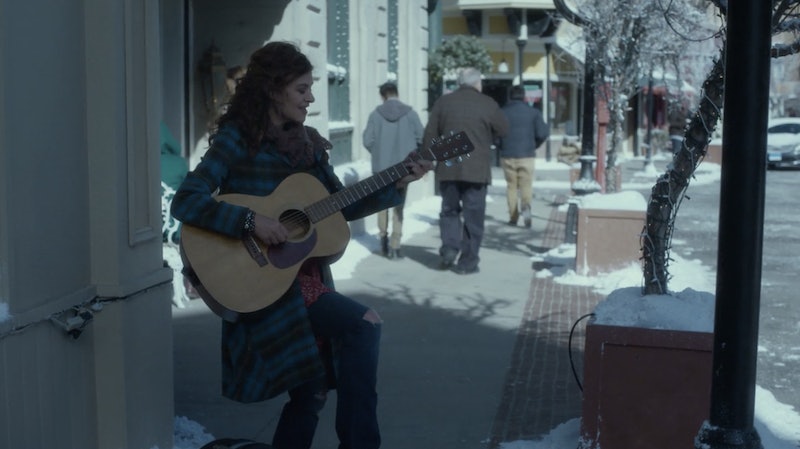 A return to Stars Hollow wouldn't have been complete without appearances from all the town's quirky, beloved inhabitants — one of whom is the town troubadour on Gilmore Girls. As longtime fans know, this guy gets a little touchy when anyone infringes on his turf, so it was no surprise when he chased another street musician across the town square when she dared sing and strum her guitar on the streets of Stars Hollow. A Year In The Life was filled with easter eggs and references to the original show, but this one was especially meaningful because Carole King's daughter played the second troubadour.

On a series that's all about mother-daughter relationships, it was lovely to see both King and Louise Goffin appear in the revival. Although "Where You Lead" debuted on Carole King's 1971 album Tapestry as a solo, the Gilmore Girls version is performed by King and Goffin. It's always been fitting that even the series theme song is a mother-daughter collaboration — and the original lyrics were adjusted in order to convey that sentiment. In fact, the original version was a love song and King recently told an audience that she doesn't perform it much because: “It came out just before women’s lib, and it’s got kind of a ‘stand by your man’ lyric," as reported by GigWise.com. Luckily, with a few small adjustments, it's the perfect song for mother-daughter duos who double as best friends.

Goffin, who is a successful singer-songwriter in her own right, spoke with GilmoreNews.com in May about her cameo in A Year In The Life and revealed that she was mostly unaware of the Gilmore phenomena during its initial run. She lived in England in the 2000s and was busy with her own career and her young children — so Goffin didn't have much free time to watch TV. Years later, she mentioned in passing to some people that she sang the Gilmore Girls theme song — and their reactions made her realize that it was kind of a big deal. Goffin looked up the show's intro on YouTube to see what all the fuss was about, and it inspired her to watch the series on Netflix.

Needless to say, she quickly joined the club of Gilmore Girls devotees. In the same interview, Goffin said she was thrilled when Amy Sherman-Palladino asked her to appear in the revival:

I was invited, as part of the family tree of the history of Gilmore Girls, to make an appearance on one of the new Netflix episodes... I was grateful to be able to witness Amy’s down-to-earth ease and confidence in the way she leads the actors, camera and crew. It’s not hard to understand why she’s back, why people have so deeply fallen in love with the characters and family themes, and why I can’t wait to see what happens next.

And, King reprised her own recurring role as Sophie Bloom, the owner of Sophie's Music in Stars Hollow — so this series truly is a family affair in every way possible. I was a little disappointed that we didn't get to hear "Where You Lead" until the final credits rolled, but this awesome cameo more than makes up for it.