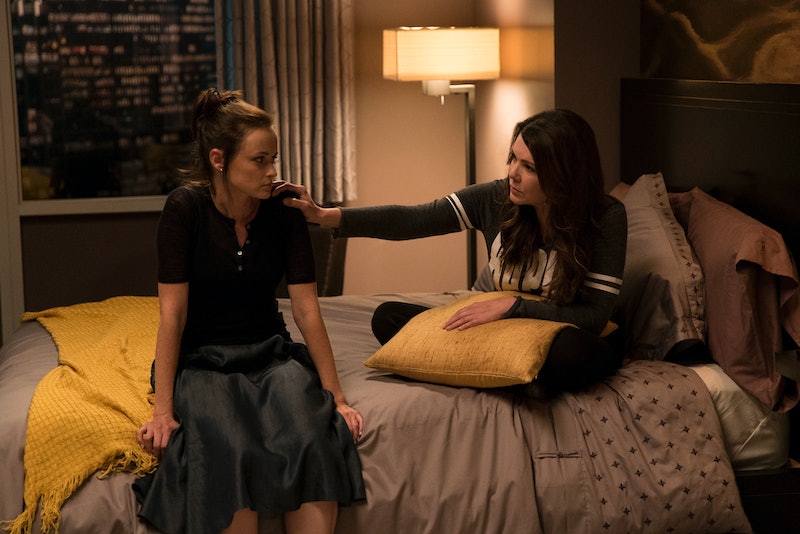 Well, we made it. The much-anticipated Gilmore Girls revival finally arrived, and, by now, you’ve either spent the weekend marathoning the last legs of the widely beloved show or expertly dodging spoilers for those near-mythologized final four words. If you’re in the latter camp, please stop reading now — seriously, right now — because the series ends with a major cliffhanger. Spoilers ahead. OK? OK. So, Rory tells Lorelai she’s pregnant. The reveal raises a lot of questions, but one in particular weighs heavy. Who is the father of Rory’s baby?

Unless you shamelessly skipped ahead, there’s an obvious frontrunner. Rory doesn’t end up with any of her former boyfriends per se, but she does have an illicit, no strings attached arrangement with Logan, who’s living in England and engaged to another woman. She eventually cuts ties with him after the aforementioned fiancée moves into his London apartment, but not before having one last tryst at a New Hampshire inn. Their ongoing affair points the finger pretty definitively at Logan, but that still doesn’t rule out the array of other theories that have since circulated the web. Let's explore.

Wait, who? Oh, yeah, the boyfriend Rory keeps forgetting to break up with. They've apparently been dating for two years, so it's safe to assume that they've slept together. It's just unclear how recently. We only see him in the first episode, "Winter," before he breaks up with Rory via text because of their "ever-conflicting schedules." It's unlikely he's the father given how frequently Rory forgets he even exists. But it's also not a total long shot that they spent a little time together between the sheets.

While on assignment in New York City, Rory has her first-ever one night stand with a guy dressed as a Wookiee (you know, the ones from Star Wars). She immediately regrets the entire situation, but day drinking was involved, which may mean she was a little reckless with protection. The only wrench in this scenario is that she slept with him toward the end of "Spring," and she doesn't tell Lorelai she's pregnant until "Fall." Still, we don't know how long she's been hiding her bun in the oven or even how soon she found out herself. She does down a couple shots with Jess in "Summer," so one can hope she wasn't pregnant (or at the very least wasn't aware) until several months after her Wookiee encounter.

Jess pops up a handful of times in the revival, including to give Rory a heartfelt, sweet, and very necessary pep talk. A longing glance through a window hints strongly that he's still in love with Rory, so it's possible Logan wasn't the only ex-boyfriend she was secretly seeing. However, nothing about her relationship with Jess seems outwardly romantic.

We see Dean for all of 30 seconds, so this is merely an obligatory mention. According to his brief exchange with Rory in "Fall," he's happily married to a woman named Jenny, lives in Scranton, and has three kids (plus a baby girl on the way). But let's not forget that Rory lost her virginity to Dean while he was still married to his first wife, Lindsay, during the original series. From the looks of it, both Dean and Rory have long moved on, so let's hope that was just a one-time mistake and he's not in the running here.

Given the show’s cyclical nature, Logan as the father makes the most sense. Creator Amy Sherman-Palladino has called him Rory’s version of Christopher, and him being the baby daddy would bring the series full circle. Plus, he's the only guy Rory seems to be regularly sleeping with, which logistically increases his odds.

Regardless of which man gave rise to the newest Gilmore Girl (or boy), the takeaway is that it doesn’t really matter. The show has always hinged around mother-daughter relationships, whether it be Lorelai’s closer-than-close best-friendship with Rory or strained-but-everlasting bond with Emily. Rory’s pregnancy, though 16 years later, is a clear nod to her own upbringing. Lorelai, too, was lost and unattached, but she raised her daughter fearlessly and on her own. Rory once said the person she most wanted to be in life was Lorelai, and this is her chance to finally become the kind of mother that made her who she is.