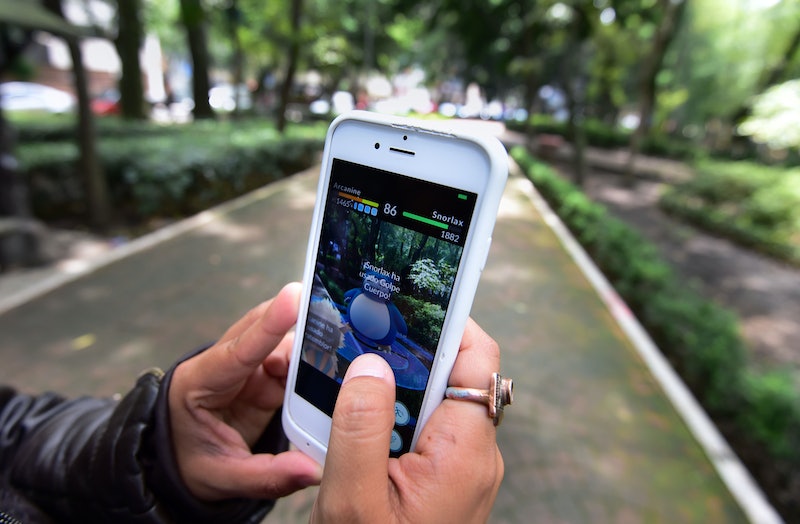 Now, I think we all learned our lesson in middle school — rumors and gossip are nothing but trouble. And generally, I stand by that assessment. But every so often, a rumor comes along with such factual strength, and so much potential excitement, that you will it to be true with all your heart. Like, around 100 new Pokemon might be coming to "Pokemon Go" in the next update, just in time for the next round of holiday family boxing matches. Like, that kind of a rumor. Again, they're just rumors, so we can't take this as gospel truth yet... but it's exciting all the same. Bustle has reached out to "Pokemon Go" developer Niantic, Inc. for comment and will update if/when we hear back.

Update: Niantic has no official comment on the rumors.

Earlier: If you were living on a rock or just really, really, obstinately avoidant of the media or of anything, honestly, then maybe you hadn't heard that "Pokemon Go" was a thing. It became a thing on July 6 of this year, and the world collectively freaked out. The augmented reality app, which allows users to "capture" Pokemon based on their geographic locations, became an instant hit, causing traffic jams, stampedes — even a pop-up market for "Pokemon Go" services. One time, I had to drive through a flood on the highway in the middle of Wisconsin, and the other person in the car didn't notice because they were too busy catching weird, rural America Pokemon. True story.

The app enjoyed 500 million downloads and generated an estimated $600 million in revenue in the first 90 days. And then... well, summer ended and so did the "Pokemon Go" craze. Summer lovin' had me a blast, summer lovin' happened so fast, you know?

But unsurprisingly, Niantic, Inc. is not going softly into the night. According to web scanner PokeVS, which allows you to scan for Pokemon in real time, anywhere in the world (if you ever wanted to feel like a nerdy spy, this site is a primo destination), the code currently being generated over at Niantic suggests a huge update on the horizon.

According to PokeVS and VentureBeat, code allegedly exists for update features including over 100 new Pokemon, player versus player battles, the ability to raise your Pokemon (like Tamagatchi!), and the ability to trade Pokemon with other players. All of these features were previously mentioned by Niantic CEO John Hanke as in the works, but with no release date; the implication was that they'd be spaced out over time. And again, it bears repeating that right now, none of the new Pokemon or other additional features have been confirmed yet; if you'd like to hold out hope, though, the "Pokemon Go" buddy system was initially discovered the same way, and that definitely became a thing, so... I'd say the odds are looking like they're in your favor.

2016 has been horrible, but maybe the "Pokemon Go" humans know we all need an end-of-the-year treat. One that helps us forget, for just a fleeting moment, what lies on the other side of 2017. So hey, in the meantime, here's a look at the new Pokemon that might be coming to your favorite app soon.