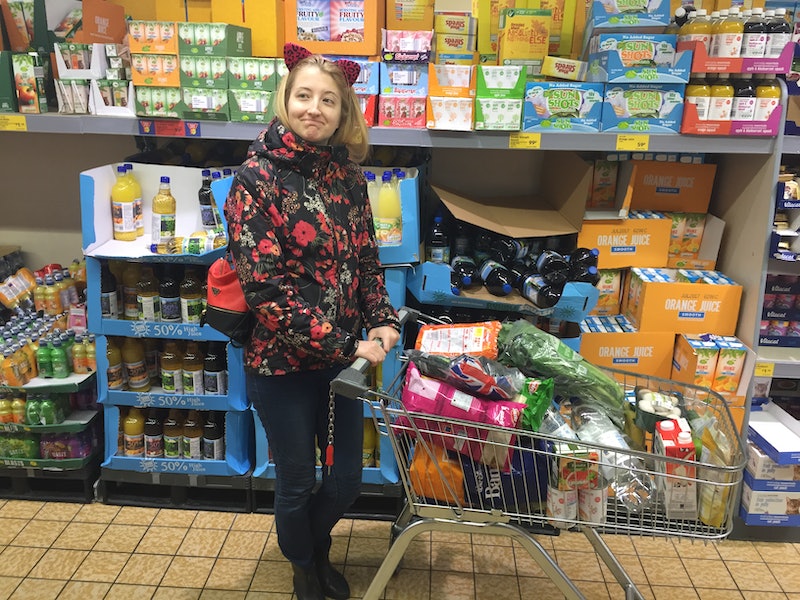 I'm a huge fan of dressing up in day-to-day life, and I can't help but admire Ariana Grande’s frequent flaunting of cat ear headbands in recent years. I wanted a piece of the fun too, so I wore cat ears in everyday life like Ariana Grande, to discover what it’s like for a non-celeb to sport such a whimsical look while partaking in everyday tasks.

Let’s face it, my everyday life — including exciting activities such as trips to the supermarket — can’t really compare to the extraordinary schedule of Ms. Grande, that’s likely filled with larger than life performances, meeting fans, and attending celebrity parties. I wanted to see how this playful look held up during the life of a “normal” person. Sure, I am quite an eccentric character who loves playing dress up, but I do have to pay my bills and partake in adulting too, just like the rest of us millennials.

With the news of Ariana Grande’s collaboration with Brookstone, resulting in the funkiest pair of cyber style, bluetooth wireless cat ear headphones known to man, I knew my time had come. So I collected a bunch of cat ear headbands and I wore cat ears in everyday life for an entire week, in the hopes I would come to understand Ariana’s adoration of this cute accessory.

I was super excited for my first day of wearing cat ears — it reminded me of the fun I had while wearing Halloween accessories with everyday outfits. This got me to thinking how Ariana adopted this rather festive accessory in the first place.

During an interview with Power 106 Los Angeles, Ariana tells the presenters that she's always a cat for Halloween and in regards to the cat ears, she says, "I just like 'em!" I'm sure I'm not the only one who can understand Ariana adopting this signature style (like her famous ponytail) as I usually sport one of my own — I'm often seen in a quiff.

On the first day, I traveled to the city where my mom lives. I soon forgot I was wearing a cat ear headband and it was actually rather useful for keeping my hair off my face. However, when we met my BFF for lunch at a fancy Italian restaurant, I became hyperaware that I was wearing what appeared to be a child's hair accessory. I felt much more at ease when we went to a nearby cafe for coffee and cake, as the vibe was more relaxed. After this, we headed to the movie theatre and I was thankful that we had seats on the back row, otherwise my ears may have been a problem for anyone sat behind me.

All in all, it was a successful start to the week!

As I'd stayed over at my mom's place, we'd arranged that I'd join her in attending the Sunday service at her church. I am by no means a religious person, but I did attend Catholic school, so I didn't feel too out of place going to a religious service. However, I did feel very weird about wearing my cat ears to church and wondered if it may come across as disrespectful.

We were dropped off by our taxi and I felt slightly dubious about entering this sacred space. But, I was pleasantly surprised how folks curiously enquired about my choice of headwear and then totally accepted my response that I was working on an article. One lady even described my ears as, "great" and said more people should wear them and have more fun, which was a response I wasn't expecting.

Although, I did feel odd kneeling at the front of the church and receiving a blessing from the priest, who had to carefully position his hand inbetween the fluffy ears on my head.

After church, we had a stroll through the city before I made my way home. Here I am pictured outside the city's minster — AKA the largest church in the city — and you can barely notice my cat ears. I felt like I blended in amongst the hustle and bustle of city life and people in the street didn't seem to notice my unusual accessory.

The same could not be said for my experience on day three. I was back in my small hometown in the North of England, where a trip into the town centre means you'll likely bump into at least one person you know.

I went to the supermarket with my partner, while wearing a lovely pair of pink cat ears, that I thought went rather well with my snow jacket. I must admit, I felt rather unusual walking down the aisles wearing fuchsia animal ears, as I'm sure you can see from my accidental Grumpy Cat impression. But our trip went without a hitch and I didn't spot anyone I knew.

When it came to crossing the halfway point on day four, I decided to mix things up a bit with a pair of fluffy, leopard print ears. I realized I was becoming a cat ear connoisseur as I dubbed these my least favorite pair, due to the fact that they weren't as evenly spaced and "realistic" as the others, IMO.

After work, I went for a swim. I felt totally mad upon entering my local leisure center — because who in their right mind wears an animal ear headband to a swimming pool? Of course, I took them off before swimming as I didn't think I'd be allowed to wear them in the pool, plus I might have risked losing them. Sadly, this was the day that I realized that cat ears aren't practical for every occasion.

Wearing cat ears to work somehow made everything way more fun. Sending emails? A ball. Completing paperwork? A blast. It was as if they had magical properties that made me feel like I shouldn't take life too seriously, because unlike cats, we only get the one shot at it.

Even tedious tasks, such as spiralizing courgettes became more enjoyable while wearing cat ears. I was actually really enjoying myself.

On the sixth day, I realized how adorable cat ears looked with pigtails. The only thing was, I felt a tad more juvenile while wearing cat ears and pigtails, especially when I had a bunch of important packages to send at my local post office. Luckily, the cashier was about my age, so when she asked why I was wearing cat ears and I told her the reason, she thought I was cool. I am probably the least cool person you could ever meet, so this was a serious compliment.

I felt rather mischievous in my pigtails and cat ears combo, like a cross between Harley Quinn and Michelle Pfeiffer's Catwoman. I felt more alive and as if I could take on the world; these were feelings I definitely wasn't expecting to encounter during my experiment.

The final day took a different turn. I was collecting my seven-year-old cousin from school after work and I knew she would love my cat ears, as she has a few pairs herself. It soon dawned on me, as I waited in my car and ate a sandwich, that I probably didn't look like a responsible adult that could take care of herself, let alone a child. This made me feel a little uncomfortable and I kind of wanted to pin a sign to my shirt that read, "I am an adult, I promise!"

I soon forgot about my doubts as I took my cousin to a rad pottery decorating class for kids. After this, my aunt came to collect my cousin and I whizzed off to my singing partner's house to have a rehearsal. My friend is used to me wearing all kinds of crazy outfits for work, so she barely batted an eyelid and we proceeded to have a productive rehearsal.

Reflection On A Kitty-Eared Life

Funnily enough, as the days went by, I didn't feel half as self-conscious as I thought I would at the start of the week. I am always up for wearing costume type attire, but I am not a robot, so I too feel self-conscious on occasion. I was also really surprised by people's opinions on the cat ears — I'd half expected people to not take me seriously or think I was an "immature" woman trying to relive my youth, but I didn't actually gain any negative feedback, aside from one passerby who meowed in my ear in the street, but that wasn't necessarily a negative.

I think the key point to take away from this is to wear whatever makes you happy or items you like, just as Ariana claims to do. Because at the end of the day, you're the one who has to look at yourself in the mirror everyday. If you feel like your personality isn't shining through, make a change: Add a quirky accessory, get a new haircut or dye your hair, or completely change your style. The world is your stage and if you want to wear cat ear headbands everyday, do it. Ariana would be so proud.

More like this
Here Are All 703 Outfits Rachel Wore On Friends
By Kat George
The Best Heels For Bunions, According To A Podiatrist
By Margeaux Baulch Klein and Maria Cassano
Michelle Obama Opened Up About The "Discord And Discomfort" Of Marriage
By Stephanie Topacio Long
Twitter Can’t Get Enough Of The Romance In 'Ekin-Su & Davide: Homecomings'
By Sophie McEvoy
Get Even More From Bustle — Sign Up For The Newsletter