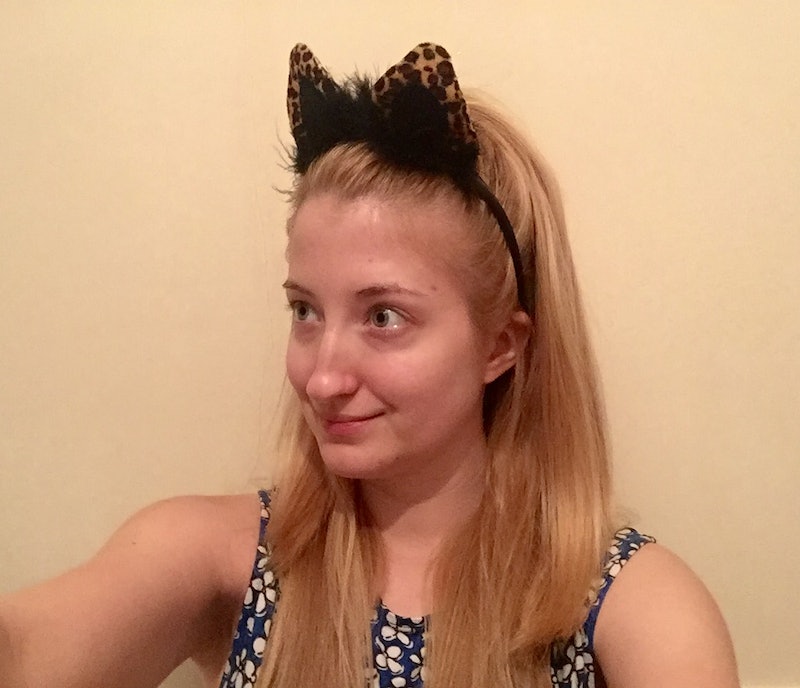 I love a signature hairstyle as much as the next gal and Ariana Grande's ponytail has got to be one of the most iconic, modern day 'dos. Throughout the decades, certain celebs have become synonymous with specific hairstyles, such as Marilyn and her platinum blonde curls or Brigitte Bardot and her legendary beehive. More recent celebs have carried on rocking signature locks, like Miley Cyrus and Taylor Swift, but you never know if their tastes will change in the years to come. There are certainly those who enjoy experimenting with their barnet and constantly mix it up, such as Beyoncé, Nicki Minaj, and the rainbow-haired Katy Perry.

As someone who wears the same hairstyle almost every day, I was a little apprehensive to try out such a different look for a whole week. Since being a teen, I have sported a '50s style quiff most days. I have a calf-lick in the front of my hair, which prevents me from having bangs, plus I can't stand having my hair in my face. If I were to wear my hair down, it would be constantly bothering me, due to the fact that my hair is long and thick. Thus, the quiff is my perfect hair partner because I can pin it back and keep it out of the way, while the rest of my hair is relaxed and down.

I was unsure about how wearing Ariana Grande's ponytail for a week would feel, but I was certainly up for the challenge.

Before starting this experiment, I had wondered how on earth Ariana Grande constantly wears a ponytail. As a child, I would have to wear my hair super slicked back in a high, tight bun for dancing shows and I remember how sore my head felt after wearing the style for only a couple of hours. It was heavenly to undo my bun at the end of the show and shake my hair free. I felt like I was in for an entire week of pain, which I guessed would be bearable but really annoying.

So I brushed my hair back, tightly secured my ponytail, and to my surprise I felt great! I had been really worried about the ponytail making my head sore, because of how high and tight it needed to be, but I was gobsmacked at how comfortable it was.

I wore my ponytail all day and all night, as I went to a local concert in the evening. Normally I would have made more of an effort with my hair before attending an event, but I thought it went quite well with my outfit. The beginning of the week had gotten off to a great start... or so I thought.

On Tuesday I was hit with debilitating cramps. I spent the majority of the day in bed, where I just could not bring myself to do anything with my hair, let alone put it into a sleek ponytail. When I finally arose from my pit that same evening, I felt slightly better so I forced my unruly hair into a ponytail.

I couldn't bare the tightness in my state, so I had to take it out shortly after, thus proving that a high-ass ponytail is not the best 'do to rock when you're feeling under the weather. It did make me look like slightly less of a zombie though and for that short while, I was grateful.

On Wednesday I was more or less back to my usual self. I popped my ponytail in and I felt ready to take on the world!

I was starting to forget all about my hairstyle and I adored the fact that it was completely out of my face. In short: I was loving my new style!

Although I was still really enjoying the freedom that this style offered me, I was getting a little bored of it. This was funny, because I normally wear a quiff everyday and don't tire of it, but perhaps it's just because I've gotten so used to seeing it. I wanted to mix my ponytail up a little, so I added a bow hair clip.

I loved how the bow made the ponytail even more feminine, youthful, and almost playful. For some reason, it also added an extra feeling of security too; it felt like it made my ponytail more solid. I was totally loving this combo.

The weekend was almost upon me and I wanted to really make the most of the half-up ponytail which Ariana always wears. On Friday night I had plans to go for a meal with my partner and our friends, followed by some live music afterwards. So I thought I'd really channel the glam side of Ariana's style.

I curled my hair using heated rollers and then separated the top half for quite an exaggerated half-up ponytail. The only problem was, however, that once I'd curled my hair I couldn't brush back the ponytail in fear of destroying my curls. So unfortunately, I didn't get my ponytail to be quite as neat and sleek as Ariana's, although I felt super foxy and loved this look. I received compliments from my friends and I definitely want to try it again.

Saturday was a day of relaxation, so my ponytail got a little dishevelled in between the lounging and the napping.

It still felt comfy and refreshing to not have my view obstructed by heavy curtains of hair though.

On Sunday I went out and about as it was Valentine's Day. My partner and I went for a cooked breakfast which was really nice and it felt quite cozy to be in a little cafe, while it was freezing cold outside. My ponytail served me very well when we got caught in a hailstorm – I imagine if I had been wearing my hair in my usual style, it would have ended up ferociously matted.

We went to the grocery store and again, I could easily see what I was doing and quickly get through my list without being hindered by a heavy hairstyle. When we arrived home, my scalp started to ache, which was such a shame as it had done so well to last the week. I wasn't about to let a hairstyle impinge on my enjoyment of Valentine's Day and the evening to come (which involved a lovely home-cooked meal,) so I gave in at the last hurdle and wore a much looser braid for the evening.

This week was a good learning experience for me; it taught me not to presume and to try new things. At the start of the week I honestly thought I wouldn't last a whole day wearing a tight Ariana Grande ponytail, but the style really surprised me with how comfortable it was.

In addition to this, I felt as if the ponytail made me feel more confident, which was really the opposite effect I was expecting. Before this experiment, I envisaged myself looking and feeling immature because I thought the style would make me feel like my old, ponytail-wearing, high school self. Strangely enough, I felt that the tightness of the ponytail pulled my skin back a little and made me look more alert and energized, which IMO, made me look more youthful in a different way.

Thus, I'd like to thank Ariana Grande and her kick-ass signature ponytail, for helping me step out of my comfort zone and try something new. You rule girl!