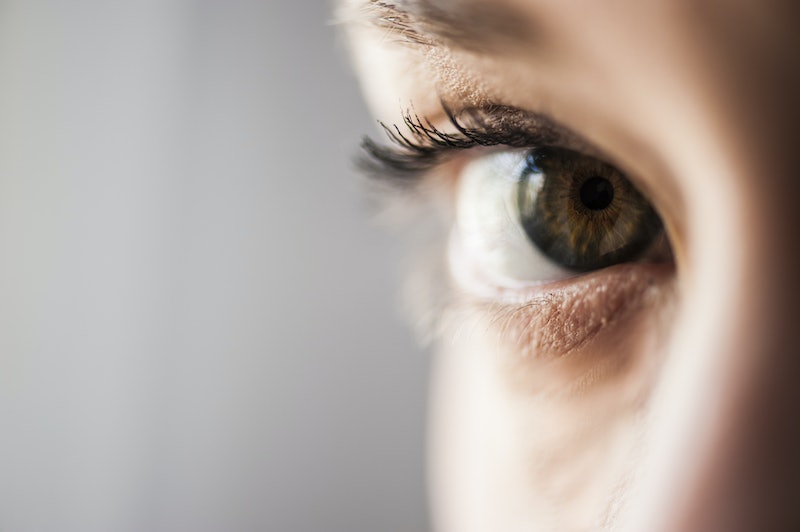 Eye contact is something we've been taught as good manners when we're having a conversation with someone; but lock eyes too long, and you might be in for more than you expected — apparently 10 minutes of eye contact can make you hallucinate, according to research. Christian Jarrett, author of the British Psychological Society's blog Research Digest, recently highlighted a study that found that if you sit in a dimly lit room and stare into the eyes of another person for about 10 minutes, you might experience something that resembles mild dissociation — a term used when someone loses their sense of reality.

Jarrett references a 2015 study by vision scientist Giovanni B. Caputo of the University of Urbino in Italy, where participants engaged in extended eye contact experienced a feeling as if time was slowing down, as well as bizarre sounds. Here's where it gets even creepier: 90 percent of the participants saw deformed facial features in the person they were looking at, 75 percent saw a monster, 50 percent saw their own features, and 15 percent saw a relative's face (dead or alive). Others saw animal faces, or the face of an old woman or a child. For many of them, these changes took less than a minute.

The concept of our perception of reality shifting in unusual circumstances is nothing new. In the late 18th century, Erasmus Darwin (philosopher, physician, and grandfather to Charles Darwin) explained how objects can fade when you stare at them for a while. The idea was later explored by philosopher Ignaz Paul Vital Troxler, and the phenomenon became known as Troxler's Fading. And Caputo himself has been studying oddities of perception for some time; his 2015 study is just part of his body of work on the suject, which extends back to 2010 and his paper on the "strange-face-in-the-mirror illusion."

What's happening to our sense of vision when we focus our gaze for too long? It may be due to something called neural adaptation. Neural adaptation is when the neurons in your brain decrease or stop their response all together to an unchanging stimulation. There is an absence of information that your brain tries to fill in on its own by guessing, using perception, or basing it off our experiences; so, the features of whatever you're staring at may change, disappear, or reappear. Once you blink or shift your focus, or if your target moves, your perception will be restored.

There are many optical illusions that rely on a prolonged gaze to play tricks on your mind. One other trick involves staring at a dot in the center of a picture and then looking at a blank wall. Similar procedure, but this one also has to do with the colors involved.

Give your brain enough time to process something — whether it's your own reflection, the face of another, or a dot — and weird things will start to happen.