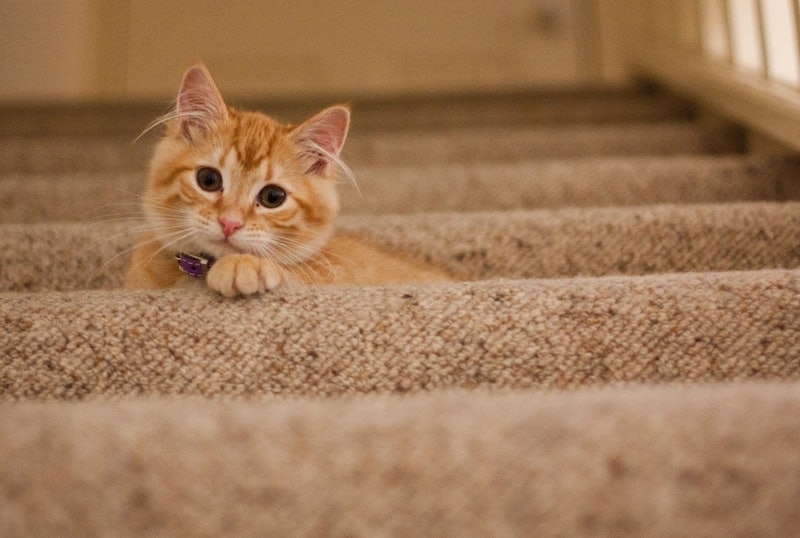 The cigar in the brick wall. The smartphone on the carpet. People are all about optical illusions and tricks of the eye lately. And now, a new illusion has taken over the internet, sending everyone out on a wild goose chase. Or... a wild cat chase, rather. A tabby cat, to be specific — this optical illusion with a cat sitting on a pile of wood, blended in so perfectly that you can hardly see him.

The camouflaged cat image was shared on Reddit earlier in the summer, and the feline in question is named Lloyd. Lloyd was apparently overcome with a bout of exhaustion (understandable — cats are really busy animals), and decided that he needed to lay down for a nap. Immediately. So he found this pile of wood, hunkered down, and took a little snooze. Rest assured Lloyd slept without interruption, mainly because no one even knew he was there. He blends in so perfectly with his surroundings that it took me longer than I'd care to admit to find him.

Take a look for yourself and see if you can find the sleeping Lloyd. He's a sneaky little fellow, that cat. Did you spot him? How long did it take you? It's a tough one!

The act of using camouflage is nothing new. In fact, human beings didn't even invent it. It predates our existence completely, and actually comes from the way animals naturally evolved to better blend in with their environments.

Objects become camouflaged with the help of two simple elements: Color and pattern. The colors must match the dominant colors of the environment. A camouflage works best when it is a combination of multiple colors that are all similar in hue — so let's use the example of Lloyd. Lloyd is technically not one color; his individual hairs are likely unique in color, but so close that we can't really make out a difference. This type of patterning is very disruptive to the eyes and brain, which is how camouflage works: With a mixture of similar colors, the contouring and outline of the object (the cat) is even more hidden and blended in with the surroundings (the wood pile — which is also a combination of several similar colors).

It's so confusing to a human being because our perception naturally organizes things into separate objects. Our eyes are looking for continuity (or discontinuity). A camouflaged cat appears to be one with his environment; so, we process the pile of wood as one object. The same thing is going on here:

What happens as soon as you finally spot Lloyd, however? You can never unsee him. You always know he's there, and you wonder how you ever missed him in the first place. This is all because your brain has now registered two distinct objects: The pile of wood, and the cat.

This also helps explain the aforementioned camouflaged smartphone in the carpet and the cigar in the brick wall. It's all about an object's appearance in relation to its environment.