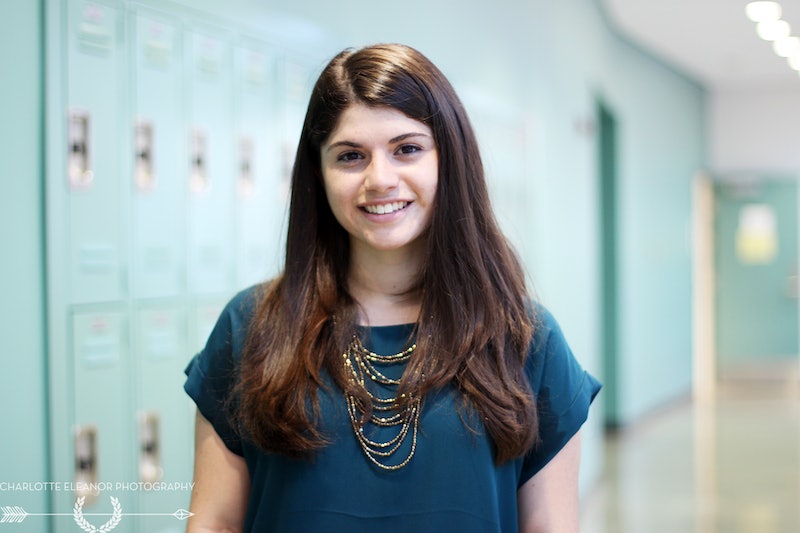 On Election Day, I tried to soak in as many memories as possible; I thought, hey, this is going to be a day I want to remember. This will be a day my children ask me about. They are going to want to know where I was, what I did, and how it felt to elect Hillary Clinton as the first female President of the United States. I tried to remember details. I even saved things to my Snapchat story. But the night didn’t end with the shattering of a glass ceiling.

However, when I look back on that night years from now, I will remember being a part of history in a different way than I expected. I was in Nevada for Election Day, volunteering to elect Catherine Cortez Masto to the Senate, Jacky Rosen to the House of Representatives, and a slate of Democratic women running down the ballot to represent communities across the state. I have been interested in campaigns and politics since I was young, and even ran for office myself. This cycle, I had been working at EMILY’s List, an organization dedicated to electing pro-choice Democratic women for offices across the country. While this year’s Election Night ended without electing a Democratic woman to the White House, I witnessed firsthand the election of the first Latina ever to the United States Senate, as we helped Catherine Cortez Masto get across the finish line. But amidst that excitement, the night was bittersweet. I don’t think I’ll ever forget the feeling of experiencing so much hope and disappointment all at once. As a young, queer, Latinx who was raised to believe in the American dream, I felt conflicted. Like most Americans, I wanted to know how we came so close to electing Hillary Clinton as president, but end up with Donald Trump.

More importantly, I wondered how this would affect political ambition in women and girls. What could I possibly say to convince girls to run, when they have just witnessed a bully beat one of the most qualified, hardworking presidential candidates in American history? I thought about all of those little girls who wrote Hillary letters of support, and what they would think when they found out that being the most qualified, the most prepared, and the most experienced person is sometimes not enough.

Americans everywhere are grieving Hillary Clinton’s loss; after all, a majority of them voted for her. While the highest ceiling wasn’t shattered that night, history was made. In Henderson, Nevada, we saw voters elect an all-women Democratic ticket, from the presidency all the way down to the state Assembly (yes, including the presidency, since Clinton took the state). Women candidates and people of color made history across the country on November 8th, and that progress cannot be understated. For example, three more women of color will be going to the Senate. To put that in perspective, we've only ever had two women of color in the Senate in our country's 240-year history. In one election, we added three. Six more women of color were elected to the House of Representatives; the Hispanic Democratic caucus is larger than ever, and Delaware elected the first woman and the first person of color to represent their state in Congress. On the local level, Ilhan Omar, a former refugee, became the first Somali-American woman legislator, and EMILY's List successfully elected 79 women to state and local office.

Then I thought about going back to work at EMILY’s List, where I am a member of the team that helps recruit, train, and elect women to state and local offices across the country—and through that build a pipeline of Democratic women leaders to run for offices at all levels. My first day back in the office after volunteering, I got multiple calls from women who said they were interested in being trained to run for office. I thought about the work organizations like Running Start do to train and recruit young women to run for office, as well as call out the sexism they might face when doing so. That’s when I remembered that as women, as people of color, and as members of the LGBT community, we unfortunately know what it’s like to have our rights under attack. We know the feeling a little too well, but we also know how to fight back. We know how to lean on each other and that’s exactly what we’ll do.

If you’re looking for a couple of easy ways to get involved in the fight to ensure that the rights of no Americans are left behind, here are some that you can choose from:

1. Learn The Facts About Women In Politics

Women politicians create real change once elected, but in order to get them there we need to learn more about the gap in political ambition, as well as the barriers women face when running. Reading research from the Center for American Women and Politics is a great place to start.

2. Get involved With Organizations That Encourage Women To Run For Office

They work. Organizations like EMILY’s List and Running Start help women and girls see themselves as candidates, as people who deserve to implement their ideas and contribute to policy by bringing their diverse voices to decision-making tables. How do I know this? Running Start helped me see myself as a candidate, and I credit the mentors and friends I have made through the organization for helping me choose to run.

3. Support The Issues You Care About

Whether that means supporting candidates who have vowed to protect immigrant rights, climate change, or women's access to health care, or volunteering or donating to an organization like Planned Parenthood that provides critical health care services to communities that need it most, everyone can have an impact on the future of women and our peers.

Implicit biases, or biases that are subconscious, are so heavily ingrained that they can be hard to acknowledge and understand — but they explain some confusing phenomena, like the fact that the most feminist among us might have a tendency to associate leadership roles with men. That 's why we must address these biases in ourselves and in others to challenge the structures that keep women from having equal access to leadership roles (and yes, there is research on that, too).

5. Ask Women And Girls In Your Life To Run For Office

Find fun and creative ways to help them develop their leadership skills — this could mean supporting your local Girls Scouts or referring people to training programs that will help them get ready to run. Let them know that you think they should run, by nominating them through She Should Run’s website. Encourage them to contact EMILY’s List and find out if there’s a training near them for women interested in running. Or, flip the script used to describe women leaders and ban words like “bossy” from your vocabulary.

6. Amplify The Success Of Women And Girls In Your Life

From the #BlackGirlMagic movement to the women White House staffers disclosing their strategy to be heard, “amplification” works. Do it. Give credit to a colleague for her great idea at a staff meeting, or support a local woman-owned business.

Take a leadership position. Learn from others who have done the same. Read about women like Nanette Barragán, who beat the odds as the daughter of immigrants to pay her way through college and become the first Latina to represent Califorina's 44th District; or Stephanie Murphy in Florida, whose parents were Vietnamese refugees. These women broke the odds to beat out establishment candidates (one of whom had been in office for 23 years). They can do it, and so can you, if you take that leap. I never thought I would run, but after learning about all the reasons women don’t, I did it anyway. At 18, I became an Advisory Neighborhood Commissioner in Washington, DC. I did it because I knew that if women like me don’t start seeing running for office as an option, we will never have the representative government we so desperately need.

Like many of you, I am still shocked at the results from election day. I’m also scared about what a Trump presidency and Republican-controlled Congress will mean for many Americans. I’m taking my time to heal and recoup, and I’m not sure what is coming next. But, when it’s time to roll up my sleeves and get to work, I hope you’ll join us in electing a movement to change the face of power.