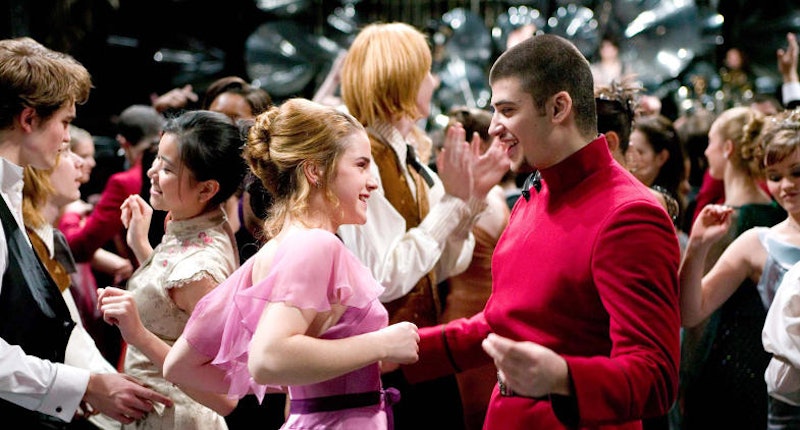 To top off what may very well be the most emotionally overwhelming year for Harry Potter fans since 2007, Barnes and Noble stores are hosting Harry Potter Magical Holiday Balls across the United States. It's been over 16 years since we first felt our Yule Ball FOMO in full force, y'all, but now it's finally coming full circle! The nationwide event will take place on Friday, Dec. 9 at 7 p.m. local time, and will include magical festivities including and not limited to Harry Potter-themed crafts, wizarding games, music, and "spell-binding surprises". All stores are participating, but if you want to check on your local one ~just in case~, find your nearest Barnes and Noble on their website here.

Harry Potter fans young and old are still abuzz after Barnes and Noble's Harry Potter and the Cursed Child release festivities, a hark back to the golden Harry Potter book release days of yore. Similar to those parties, Barnes and Noble is encouraging fans to dress up for the occasion as their favorite characters. Now that we have a whole slew of new characters from Cursed Child and Fantastic Beasts and Where to Find Them to choose from, your options are more overwhelming than ever (but if anyone wants to go halfsies with me on Queenie's coat in the new Hot Topic Harry Potter collection, I'm here for it, just saying!).

So what can my fellow witches and wizards expect from this event in particular? According to Barnes and Noble's press release, the crafting stations will include ornaments and owl fans, as well as a coloring station. Games will include Wizard Charades, trivia, and a word search, and there will be a photo op for guests as well. Get there early, though, because stores will be giving away 100 copies of the Harry Potter and the Chamber of Secrets: The Illustrated Edition poster, while supplies last!

Some stores are offering additional activities, which are listed on their website here. Customers will also be able to peruse all the new Harry Potter titles and merchandise that Barnes and Noble offers, including 2016's release of Harry Potter and the Cursed Child Parts I and II and Fantastic Beasts and Where to Find Them: The Original Screenplay .

Don't forget to invite all your Weird Sisters to hang! This is going to be a magical holiday ball to remember, and hopefully the first of many more to come.